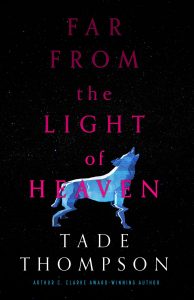 If you’ve been reading my column for the last three years (has it really been that long?), you’ll know that, along with Lavie Tidhar, Tade Thomp­son is one of my favourite contemporary writers. It was a pleasure, back in 2019, to review books two and three of the Rosewater trilogy for Locus.It’s an incredibly entertaining and award-winning series, set in Nigeria, that brilliantly reframed the alien invasion narrative as an expression of neocolonialism. I was therefore very excited to pick up Thompson’s latest novel, Far from the Light of Heaven. Like the Rosewater trilogy, it’s a book brimming with big ideas, imaginative flair, and memorable characters; and just as Thompson did with alien invasions, the novel also puts a new spin on one of the oldest sub-genres: the locked-room mystery.

Michelle “Shell” Campion comes from a family of high achievers. Her father, Haldene Campion, was a legendary astronaut who went missing in space more than a decade ago, while her brothers, Toby and Hank, have also excelled in their fields. Following in her father’s footsteps, Shell is heading out into space (or what the old-timers call the “Brink”) as the first mate of the starship Ragtime. The trip, which will take twenty years there and back, will ferry one thousand passengers from Earth to the evocatively named colony world Bloodroot. We’re told, though, that Shell’s position is “wholly ceremonial.” Human intervention has never “been needed in the history of interstellar spacelight,” and as such, Shell will be spending most of the journey in cryo-sleep while the Ragtime’s charming artificial intelligence pilots the ship. So, imagine Shell’s surprise – or more accurately abject terror – when she wakes up ten years later to discover that, while they have arrived at their destination, 31 passengers have gone missing, the Ragtime’s disposal unit is filled with severed body parts, and, if that’s not shocking enough, a wolf is stalking the corridors of the ship.

While Tade Thompson isn’t the first author to set a locked room mystery in space – there’s Mur Lafferty’s Six Wakes and Christopher Brook­myre’s Places in the Darkness, to name two recent examples – his take on the trope is likely to be the most brutal. That’s in keeping with Thompson’s high-octane, high-concept attitude towards science fiction, an attitude that not only embraces spectacle and drama but also centres Nigerian culture, language, and tradition. Far from the Light of Heaven, aside from being a brash, white-knuckled reworking of the locked-room mystery, depicts a future where black folk, particularly those descended from Nigeria, are flourishing in the dark reaches of space. The colony world of Bloodroot is located in the La­gos solar system, named after the nearby space station which was established “by mainly Black Afrofuturists” who through “considerable human resources and a rich, funky cultural history mixed with African myth and myth-making… willed the space station into being.” Thompson isn’t naive, though. As successful as it is, the Lagos station (and Bloodroot) only exist because they serve, or at least don’t interfere with, the interests of Yan Maxwell, owner of MaxGalactix. Dubbed the richest man in the galaxy – more a Musk than a Bezos – “he sees cash, not race. He is an equal-opportunity exploiter.” This includes the exploitation of the Tehani community, who are dying out as a result of the exotic materials, mined by MaxGalactix, which have irradiated their land. It’s this very act of slow genocide that the plot of the novel pivots around.

Thompson’s knack for creating flawed but re­latable characters is also on show. There’s Shell and her desire to be viewed as not only competent but someone worthy to follow her father into the Brink. There’s Fin, gifted with a preternatural skill at finding Lambers, an alien race with a unique relationship with reality, and sending “them all back to wherever the fuck they come from.” As Bloodroot’s closest thing to an investigator, he and his android colleague Salvo are sent to the Ragtime to figure out what’s occurred on board the craft. Their buddy-buddy relationship and their interactions (both combative and collab­orative) with Shell are a highlight of the novel. We’re also introduced to steadfast Governor Lawrence (from the Lagos station) and, maybe my favourite character, his exuberant daughter Joké (a human-Lamber hybrid). For reasons too complicated to go into, they similarly find them­selves facing certain death on the Ragtime. As much as I loved Thompson’s characters and the hectic plot ricocheting from one revelation to the next, I found his lean prose a tad too functional and expository at times, while the novel’s screech-to-a-halt-ending gives the book an unfinished feel. The abrupt end, however, does lead me to think that Thompson will be returning to the world and characters of Far from the Light of Heaven. I really hope he does.