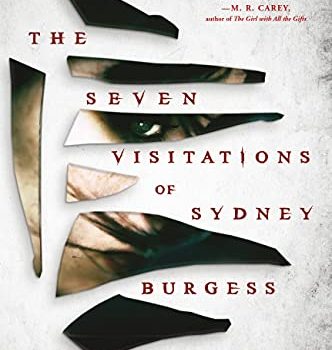 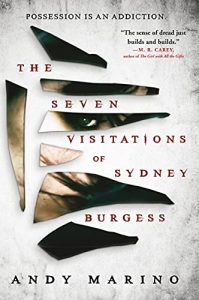 Andy Marino’s The Seven Visitations of Sydney Burgess is a creepy, tense narra­tive that exists somewhere between vio­lent psychological thriller and supernatural horror novel. However, while most of the elements of those two subgenres are present here, the novel also delves deep into serious topics like guilt, substance abuse, and mental health. The result is a story that unsettles with its many possibilities and entertains with its dark elements.

Sydney has spent the last nine years rebuilding her life after years of drug addiction and constant drinking within the context of a messy relation­ship with a fellow drug user. Now she has a great partner, a nice house, a good job, and can give her son Danny everything he needs. Then all she’s built comes crashing down one day when she walks into her home and finds a masked intruder going through their things. The man knocks Syd­ney unconscious with a large candle and ties her up with duct tape. She manages to push a piece of furniture against the door and escape, but then collapses in front of one of her neighbors. When she wakes up in the hospital, she tells her story to a detective, but what she remembers doesn’t fit with what she left behind at her house: a dead intruder who was hacked to death with a kitchen knife. Sydney remembers a lot of details of her escape, but has no recollection of killing the man, and that’s when her shady past catches up to her and no one believes her. After returning home, Sydney’s world collapses into a maelstrom of paranoia, dark visions, questions, horrific memories, and problems with her boyfriend and son, who is now afraid of something ineffable he sees in his mother’s face. The darkness that entered Sydney’s life when she met the intruder is still there, all around her, and it makes her old habits come back with a vengeance, the cravings feeding on her confusion and pushing her to do things she knows she’ll soon regret.

The Seven Visitations of Sydney Burgess is all about liminality. Sydney is an unreliable narrator who is aware of some of the things that make her one. However, she is convinced of certain things and manages to talk or explain them convincingly, only to later find out they weren’t there, weren’t at all real, or were there but she misinterpreted them. The reader is dragged through her thoughts, and the process yanks the proverbial rug from under their feet every few pages until truth is a floating signifier that refuses to be pinned down. This makes the reading ex­perience at once wildly engaging and confusing, frustrating, and addicting.

Marino is great at developing nuanced charac­ters that feel real, and that makes readers develop empathy for Sydney. Her past is always present, and she knows it. However, she does everything she can to maintain the good life she’s built. When the darkness and strange events enter her life and everything crumbles, it pushes her insecurities to the forefront and the nine years of sobriety start meaning less and less in the face of possible escape. Throughout that men­tal shattering, Sydney keeps analyzing herself, wondering if what everyone thinks she did – what the evidence says she did – is something she could do:

I try to pull on a thread in my mind that might lead back to a feeling of savagery, of the kind of primal rage that could inspire such blinding ferocity. I could almost believe that I did it, if the man had been stabbed once or twice. I think I would be capable of some­thing like that out of pure self-preservation, although I don’t know for sure. But the sheer will to drive a knife into another human being’s body twenty-eight times, to slice through flesh and sinew, over and over again – that is a monstrous act, no matter the circumstances. It would put me in a certain tier of humanity where I do not belong.

The mix of genres here is seamless. The be­ginning of the novel is purely a psychological thriller full of elements of crime fiction and a few that would fit in a police procedural. However, once Marino opens the door to the supernatural, everything takes a back seat to horror. Bad things are in the air; awful memories come back; reality shatters; Trevor, Sydney’s ex, shows up again; and addiction raises its ugly, devastating head. While that happens and Sydney’s life spirals out of control, she hovers above the moment, know­ing what the right thing to do is but incapable of doing it because nothing makes sense. This allows her bad side to take control, and the results are as bad as she knows they can be.

Horror is so often predicated on fear of the unknown and the unknowable, but human beings can acclimate to almost anything, and now that I’ve gotten used to seeing through this ugly tinted the lens, it’s like a weird simulation of the life I used to lead. It’s both repellent and welcoming and I love it as much as I hate it.

The Seven Visitations of Sydney Burgess is an emotional rollercoaster of horror that has a deeply flawed, struggling main character at its center. There is no judgment here, but despite the whispers in the dark and awful visions, Marino forces readers to ponder what they would do in Sydney’s situation if they didn’t think of chemi­cal dependency as something akin to an escape. Horror sometimes presents more questions than it answers, and that’s the case here. However, the way Marino shows the birth of those questions on the page will make readers rethink everything they think they now, and that’s exactly how the darkness takes over. 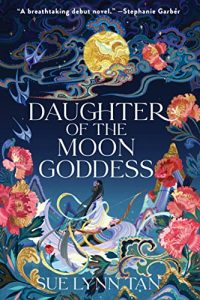 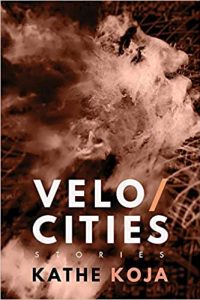 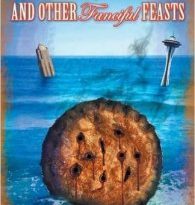