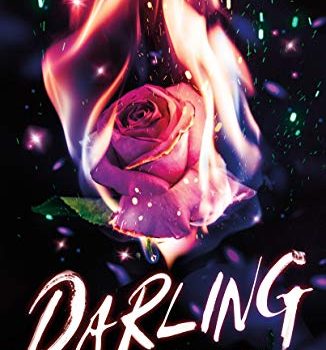 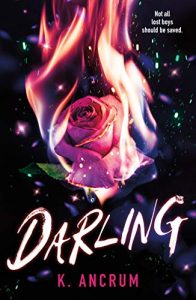 As author K. Ancrum opens Darling, her dark and mysterious take on Peter Pan, she offers up an epigraph from Barrie’s Peter Pan and Wendy as a hint of what’s to come. Here’s a bit:

The boys on the island vary, of course, in numbers, according as they get killed and so on; and when they seem to be growing up, which is against the rules, Peter thins them out.

Ancrum’s hero is Wendy Darling, a teen newly arrived in Chicago and chafing at her protective parents who won’t allow her to meet up with her online pal Eleanor who lives locally. After a round of frustrated arguing, she is banished to her bed­room as her parents head out for the night. Then, lo and behold, a young man breaks in through her second floor window! We know who he is, of course, although this incarnation of Pan is notice­ably scruffy and quite annoyed that the formerly abandoned house, now freshly rehabbed and sold to the Darling family, is fully occupied. He cajoles Wendy into fixing his torn jacket and, along with a tough-looking friend named Tinkerbelle who’s waiting outside, he convinces her to come along to a party. Is it impulsive and foolish? Yes – even Wendy thinks so. But after calling Eleanor (who is furious at her decision) and promising to stay in touch (with her phone’s location app turned on), she heads out into the night. If only her parents had let her meet up with Eleanor at a coffee shop as she asked, then maybe she wouldn’t be so fired up for adventure. They didn’t, though, and so she’s off on the long, outrageous, mysterious, and ultimately terrifying night that follows. There will be blood, there will be murder, and before it is over this dark fairy tale is going to fill you with the sort of rapturous joy that only the smartest and most surprising tales can offer.

Although Darling is most assuredly set in present-day Chicago (Ancrum is a native of the city), all of Barrie’s classic characters are present. In addition to Tinkerbelle, there are the Lost Boys (with their original nicknames), Captain Hook (now a police detective), and the ‘‘Crocodile’’ (who collects protection money from Pan). The mermaids are drag queens at a local nightclub and Tiger Lily and her family are represented by Tinkerbelle’s love, Ominotago, her brother, and their friends who attend a nearby high school. Peter, Tink, and the boys all live in an abandoned building where they get by on their wits and Peter’s talent at flinging diversionary fireworks when the cops get too close. Everyone owes Peter a favor or two, and his hold on the various groups appears to be based on conflicting parts guile, af­fection, fear, and loathing. As the night goes on, it is clear to Wendy that the beautiful young man who enticed her from her room is not at all what he seems. By then she is in too deep to run and finds herself an unwitting player in a scheme that was years in the making and must unfold on this night if Peter is to be finally stopped.

Peter Pan is the sort of story that practically begs to be reimagined and revisited (I reviewed Aiden Thomas’s excellent Lost in Never Woods earlier this year and highly recommend it), and it is clear that Ancrum has done an enormous amount of homework in hewing closely to the characterization and themes of the original (she mentions reading 43 academic dissertations on the classic in her acknowledgements). This is a dark retelling but then again, Peter Pan was pretty damn dark all along and Ancrum revels in all the fun she can have exposing the novel’s grim nature. Just as Wendy is uncertain who she can trust and where the line is drawn between the heroes and villains, the reader will also have questions about good guys and bad as the narrative unfolds. This is not a dumb heroine for follow though, and while she is impulsive her choices will ring more as relatable than outlandish to the average teen. (Remember, Wendy did fly out the window with Peter in 1904, so why shouldn’t this Wendy have her shot at fun as well?) The best part in Darling is that no one is forgettable; this is not just about Peter and Wendy but the vulnerable yet deter­mined Tinkerbelle, wicked cool Omi, relentless Detective Hook, and a lot of delightful, engaging teenagers. Even the Darling parents, especially Wendy’s mother, have important parts to play, and Eleanor, Ancrum’s invention, is brilliant and funny, an ever-reliable voice of reason even while storming a police station in pajamas!

I was quite impressed by Ancrum’s gorgeously written science fiction title The Weight of the Stars and excited when I heard she was tackling Peter Pan, but Darling is more than just an hom­age to the classic; it stands on its own as a thrilling mystery anchored by a group of female leads who line up to take down a monster with all the power and panache the girl detective genre could want. If you aren’t an avid fan of this author by now, I don’t know what you’re waiting for. K. Ancrum is the real deal; she’s giving teen readers the sort of hard-hitting, intelligent novels they crave, and she’s doing it with style and nerve every time she takes to the page. 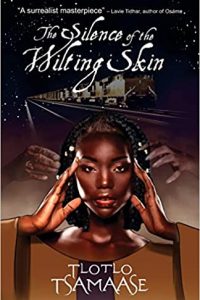 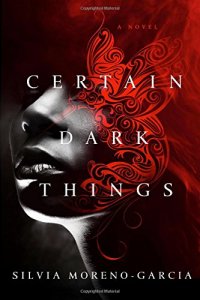