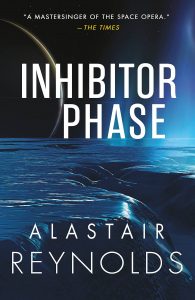 Alastair Reynolds’ Revelation Space uni­verse looks forward nearly 40,000 years (and backward a billion) and encom­passes several distinct sub-series whose stories occasionally cross each other. And like other sprawling, nonlinear series settings (think Larry Niven’s Known Space, Ian M. Banks’s Culture, or Neal Asher’s Polity), it can dump the reader any­where and anywhen for a story that may or may not require familiarity with what has gone before or will come after. Inhibitor Space is the fourth in the sequence that includes Revelation Space, Redemption Ark, and Absolution Gap – a group that can be seen as the core of this future history, since it outlines the struggles of humankind in a vast and deep galactic conflict that eventually takes us out of the Milky Way altogether. This scope allows for the inclusion of all manner of items from the Big Box of Tropes: Stapledonian timescapes with plenty of rise-and-fall cycles; present action haunted by events from deep time; the proliferation of post-human species and societies: implacable non- or post-sentient forces bent on destroying technological civilizations.

The main action of Inhibitor Space unwinds gradually and rather indirectly, starting with the narrator, Miguel de Ruyter, on a mission to destroy a starship that threatens to reveal the presence of Sun Hollow, an extrasolar sanctuary where a small group of humans are hiding from the “wolves” – also known as the inhibitors, swarms of ancient machines dedicated to wiping out technological civilizations wherever they arise. And hiding out means destroying other fugitive starships that might draw the attention of the wolves to the heavily camouflaged Sun Hol­low. But the apparent refugee starship is a ruse, and its sole survivor has actually come looking for de Ruyter, who is neither who or what he believes himself to be. Intermittent flashbacks reveal not only de Ruyter’s identity but a history of complex intrahuman warfare, of personal and political betrayals, and of adventures only glanc­ingly addressed in this novel. Nor is that starship survivor, Glass, the ordinary human woman that she seems to be, and her nature and powers are only partly revealed by the end of the novella-length Part One that sets up the rest of the tale.

Glass and her miraculously potent stealth star­ship take de Ruyter on a multi-stage mission in search of a weapon that can hold off the wolves, and along the way his old self slowly starts to re­assert itself. There are several stops on this hunt: a ruined and derelict zombie starship/AI calling itself John the Revelator; the ruins of the Glitter Band and Chasm City (setting for The Prefect, Elysium Fire, and Chasm City) and the horrific Swine House; an ocean world hosting the alien Pattern Jugglers, who can unmake and remake those who swim with them; and the crushing depths of a gas-giant world where the crucial weapon is hidden. Glass and “de Ruyter” are joined by characters with similarly complicated histories: the potent post-human Lady Arek; the damaged medic Probably Rose; and Pinky, a smart-mouth hyperpig who is more human – and perhaps more courageous and steadfast – than the posthumans he accompanies.

The whole story is haunted by memories and histories and tangled relationships growing out of fraught backstories: lost loves and friendships, failures and betrayals, desperate conflicts and sacrifices and escapes and extinctions – both the personal and the deep past rolling over the unsuspecting present. Throughout, the busy mix of SF tropes provides a metaphor-rich environment that makes the novel more than a series of gosh-wow special effects sequences and encounters-with-marvels. “I was/became a different person” is not a metaphor here, and the transformations wrought by time and trauma and dire necessity underlie the convolutions of the sprawling storyline. The Stapledonian vision includes reflections on the constraints on action in the physical world, the need to do the neces­sary without consideration of personal cost, ac­cepting forced choices, and above all persisting, refusing to give up. As Pinky, who is as close as this book gets to a normative character, puts it, “The universe doesn’t give a damn about what’s fair and right.”

We keep not dying. We’re hanging in. We’re a jumble of different ideas and different ways of living, and we squabble, and some of us smell a little funny, actually some of us smell really funny, but the main thing is this. We’re not a bunch of identical black cubes with only one idea in the universe. We’re messy and broken and we make stupid mistakes but we aren’t stupid, mindless machines that are too dumb to realise their programming no longer makes any sense. We’re people. Fish people, pig people, people-people, creepy zombie spider people….

So there are calculated risks, unavoidable costs, acceptable sacrifices, survivable injuries, tradeoffs, rocks and hard places (one of the stops is the planet Charybdis) – all in order to survive a bit longer, to find a way of slowing the wolves (who can’t really be defeated)

Not that there aren’t enough gosh-wow sequences to satisfy the most wonder-hungry reader: the perspective shift when an enormous cavern is recognized as the interior of a ruined starship like “the cloisters of some abandoned cathedral, wreathed in pale worming vines and slowly succumbing to ruin and time;” a descent into a gas giant where pressures are measured in tens of thousands of atmospheres; swimming with the Pattern Jugglers, “an information-storage biomass, intelligent in some respects but not re­ally conscious in any sense that we’d recognise,” generating shapes from their million-year-deep memories. And the book keeps uncorking new revelations right to the end.

“Space opera” is an apt description of this shaggy, extravagant novel – and of the whole Wagnerian cycle of which it is a part: gigantic sets, titanic conflicts, explosive set pieces, outsize emo­tions, characters beyond the extraordinary, driven by the direst of necessities. Gosh-wow (seriously).