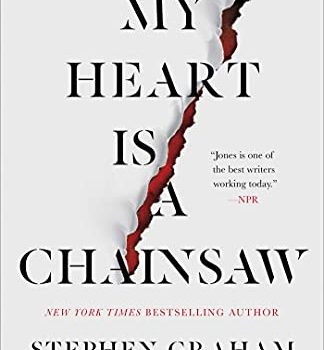 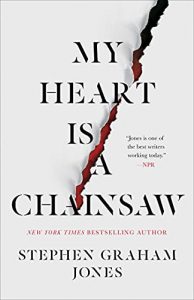 I am not a fan of slasher films, but I know enough – as just about anyone with any pop cultural awareness does – to soundly appreci­ate Stephen Graham Jones’s use of the subgenre he so brilliantly employs in My Heart Is a Chain­saw. Not being a slasher aficionado means there’s at least one level of this marvelous read that I can­not fully grasp, but that is not really a bad thing. It demonstrates that the novel works well for an audience who doesn’t know Michael Myers from Jason Voorhees. Chances are those readers will also learn a great deal about slasher movies. I did.

Horror is, according to seventeen-year-old Jen­nifer ‘‘Jade’’ Daniels, her religion. Her profound expertise in and love of slasher flicks has become her universe and a way to cope with the ugliness of the real world. Jade deals with the ‘‘anger and rejection, all the unfairness and resentment’’ she (justifiably, we learn) feels with a philosophy based on the rules and ‘‘logic’’ of slashers. As she is – more or less – graduating high school, she sees the signs that a ‘‘slasher cycle’’ is starting in her hometown of Proofrock ID.

Proofrock has its local spooky legends – Stacey Graves, the Lake Witch; Ezekiel, the preacher who locked his congregation in their church to drown as Indian Lake was created; a trio of murders at the local camp – and, like all small towns, it has some secrets from its past. Thanks to a group of billionaires known collectively as the Founders, the n’er-do-well town is on the verge of what promises to be tragic transformation. Across Indian Lake from Proofrock, the Founders are es­tablishing the super-exclusive Terra Nova enclave. The presence of the expensive mansions and their owners is, among other things, sure to make the townies all too aware of what they don’t have.

Jade is walking alienation. She has no friends and the only adult she connects with is her history teacher, Mr. Holmes, who allows her to expound on slashers in a series of essays intended to help her gain the history credit she lacks to actually earn a high school diploma. Her white mother having pretty much deserted her, Jade lives with her abusive father, an Indian. But Jade has zero connection to a tribal community. She didn’t even know she was Blackfeet until, as an elementary schoolchild, she ran across a return address with a tribal seal.

Jade’s strange credo serves her well: she’s spunky, smart, resilient, witty, and courageous. The genius of Jones’s creation is that she is so grittily endearing she almost makes the reader forget how her belief system obscures reality. You can start to overlook she is also suicidal, delusional, irresponsible, paranoid, dangerous, and a thoroughly unreliable narrator. Jade is so convincing (even though she occasionally doubts herself) the reader starts to buy into her slasher scenario(s), despite the fact that Jones clues you in to who the killer is with the first two deaths – two youthful Dutch tourists – in the opening chapter. You might also begin to wonder if any of the tale is taking place outside of her head.

The arrival of Letha Mondragon, the daughter of one of the Founders, confirms Jade’s belief that a ‘‘slasher cycle’’ is about to begin in Proofrock. Letha is the perfect ‘‘final girl’’ of the movies, the one Jade feels she can never be. Letha’s presence is conclusive proof for Jade that bloody mayhem is about to begin. Jade sees herself as Letha’s guide. With her wealth of knowledge, she can prepare the newcomer for her destined role. And while Jade doesn’t exactly welcome the multiple murders she predicts, she accepts them as inevi­table. After all, key components of her slasher theory, she explains, are that the killer is seeking revenge and that the victims ‘‘are people who were asking for it.’’

Sure enough, the bodies start turning up, no one believes Jade’s warnings, and real life turns deadly. Although a gory slasher-type scenario seems to be unreeling, much more is going on as well. This is also a coming-of-age tale, a story about cultural impact, a story about relationships, a thriller, a paean to late 20th-century horror films, and a lot more, including quite a bit of humor. It’s also a slow revelation about Jade, one of the most interesting young female characters you are likely to encounter. Will she ever realize ‘‘the real world doesn’t… follow any special rules… you can’t pick your genre…’’?

I heartily recommend the novel. I also feel My Heart Is a Chainsaw does not quite measure up to the author’s previous novel, the masterful The Only Good Indians, only because there seem to be a few flaws in the plot. I can rationalize most of them well enough to ignore. Except for one: why would a doting billionaire father uproot his straight-A daughter from whatever prestigious academy she attends and plop her into a rural high school for her final semester? Don’t allow my quibble to stand in the way of grabbing My Heart Is a Chainsaw and starting the pages turning. Once you start, you won’t be able to stop – even if you don’t care for slasher films. 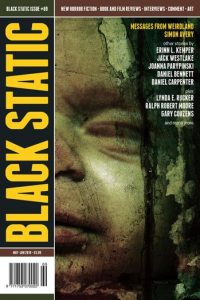 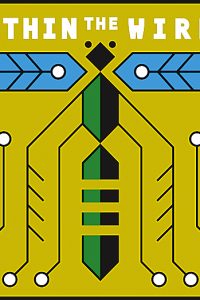