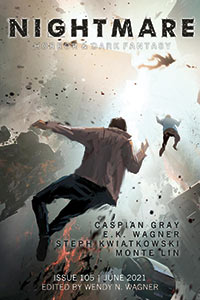 Fantasy #67 is the strongest issue yet in its new in­carnation. “Like Birdsong, the Memory of Your Touch” by Izzy Wasserstein packs a great deal into 700 words, including a near-future scenario in which nature triumphs over humankind and a relationship ends. P.H. Low‘s “Disenchant­ment” is bittersweet. A girl is born with a hole in her heart. It heals but something is still missing within her. As an adult, she must find a spell that will finally fill her up.

In “The Sweetest Source” by J.L. Jones, young Deron wants to meet the legendary Enver the Bright. His mother cannot make the journey across the desert, but he goes with her friend, Rabbit. Deron takes a lesson about patience he learns from Rabbit to heart that reinforces what his mother has taught him about coding and, when Enver offers the happiness the Source has given him, Deron decides not to accept. His patience and coding talent are rewarded. It’s a sweet tale in which goodness and motherhood win.

“By Our Own Hands” by Anya Leigh Josephs is a story that resonates in current times and offers hope and truth. David Lev’s grandmother, a Holo­caust survivor isolated by the pandemic, warns him that the evil of anti-Semitism is resurgent. She sends him searching for an ancient scroll that can provide protection. Despite his modern doubts about such things, David finds the scroll and, as the grandmother says, “Our stories don’t end. Not after thousands of years. No matter what they try to do to us. Our stories don’t end. And don’t you think there might be a reason for that?”

Fantasy #68 is not as strong an issue. “Dos Coy­otes” by Catherine J. Cole is a flash piece that tells of were-coyotes, who – “unlike werewolves, who look for their own out of a sense of camaraderie towards the pack” – are solitary hunters. They look for others of their kind only to “get rid of the competition.” Or at least that’s how it is until Lupita meets young Vincente.

The narrator is condemned to Hell for a reason he cannot remember in “Your Ticket to Hell” by Rajan Khanna. After a long time he recalls the “sin” that sent him there. I suppose it is up to the reader to determine if this supposed trespass merits his punishment. Christine Tyler‘s “The Port of Le Havre, Night Effect, 1873” is a short, poetic contemplation of death or transformation by something/someone.

Like Fantasy, Nightmare #104 is a strong issue and is followed by a less impressive one. “Negative Space” by Tim Waggoner portrays a man and his wife who are visiting a recently widowed friend and her children at their first Christmas without the deceased. The dead husband’s memorial video is playing unceasingly in the background. It’s all somewhat disconcerting, and everything grows more so as Waggoner uses second person present tense to tighten the tension until everything turns surreal, but it’s a surreality that seems unnervingly real. Good story.

In “The Cabbit” by Maria Dong, the protago­nist’s boyfriend has a pet cabbit – supposedly a cross between a cat and a rabbit. It eats, he claims, “the parts you don’t want anymore. Hair, fingernails. That kind of thing.” The cabbit devours a great deal the young woman doesn’t want. I was invested enough in the character that, in the end, I hope she discovers what she does want. Interesting and engaging.

All four of the original stories in Nightmare #105 left me debating how effective they might be for dif­ferent readers. All are well written, but I’ll suspend judgement. In Caspian Gray‘s “Empty Houses“, the numerous mirrors in their new house spook the narrator (and their cat). Then the cat disappears – except for a reflection in one of the remaining mirrors. A visiting friend also disappears – after the creepiest mirror is rehung. The story’s effectiveness hinges on whether the reader invests in the couple’s relationship, so it may or may not work for you.

“Cake Between the Teeth” by Steph Kwi­atkowski is a creepy story about a hotel night manager’s encounter with a female guest who brings a derelict in from the street. A cluster of tiny eyes appears on an Asian boy’s pointer finger in Monte Lin‘s “See with Your Eyes, Not with Your Hands“, a story about otherness. None of the eyes are dark brown like his. His friends’ reactions to the eyes reveal a great deal about their feelings about the kid.

The Dark #72 starts with “Crooked House” by Nina Kiriki Hoffman. In the depths of the Great Depression, young Pete wants to sing with a big band. The ghostly presence of his sorrow-filled dead sister Daisy makes his need to escape his circum­stances even stronger. But his story is not the real horror here. That comes from why Daisy died. This is a gut-wrenching tale well if briefly told.

In Suzan Palumbo‘s “Of Claw and Bone“, an expectant mother catches rodents, preserves their skulls, makes a mobile of them, and hangs it over her daughter Zel’s cradle. “Rodents are quick witted, cautious and stockpile food for hard times, qualities Zel’s mother believes a girl must have if she is to survive.” Older, the girl adopts the traits of “the perfect squirrel” to protect her mother – hoping her father is less likely to notice her and her mother. It doesn’t work, and although the man never harms Zel, she resents her mother for allowing her father to beat her. Other skulls – and actions – are eventually required to save them both. Bravery takes more than magic. This story is unique and effective.

A neighbor boy dies in “Water Child” by Frances Ogamba. Utonne, who works at Emeks Medicine Store, knows she lacks the knowledge and education to be practicing medicine and wor­ries a medication she provided may have killed the child. Footsteps, voices, noises, and the ghost of a bare-chested boy haunt her. Ogamba skillfully builds the suspense.

Gabby takes an unusual bus and meets a strange woman with an even stranger story in “The 21 Bus Line” by Gabriela Santiago. It is a Very Big Mistake. I usually avoid buses. I shall now definitely do so.

The strongest story in The Dark 73 is the dream­like “I was a girl once but I slipped” by Rupsa Dey, which is sort-of about borders and girls who cannot be contained. Frances Ogamba‘s “The Urn” features an African writer who possesses a strange urn that assures her good luck as long as she feeds it the proper humans. Success, indeed, comes her way. A woman, Akwaugo, visits, and the urn warns its owner not to let her near it. Of course, despite all, Akwaugo finds the urn. It’s an interesting story that might have benefitted from a bit more development.

In “Welcome Karate” by Sara Saab, 72-year-old Missy “Jock” Joquard returns to her hometown after 55 years and buys an old fitness center. Some­thing strange is happening in its swimming pool with a camera. We learn a bit about Jock, and then the story comes to an end. This one had me hooked but ended too abruptly. “Lipoppire” by Jack Klausner concerns a woman literally possessed with weight loss. Other than the literal aspect, it could be true-life horror.