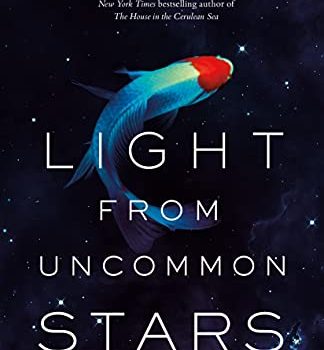 In order to escape damnation, Shizuka Satomi makes a deal with the devil. She must entice seven other violin prodigies to trade their souls for success. She finds a young transgender runaway to be her seventh, but also develops a crush on a starship captain who might offer some other hope.

Fantasy novel, third book in the Tide Child series. Joron Twiner has lost his shipwife, Keyshan’s Rot is running through is body, and he’s running from a prophecy that says he will destroy the world. But the Sea Dragons have miraculously returned, so maybe some other miracles are possible.

Gothic YA fantasy novel set on the banks of a cursed lake. Violeta Graceling and her younger brother expect a monster at Lakesedge, but instead discover the compelling Rowan Sylvanan and the sinister death god he is bound to. Violeta must undergo hazardous challenges to save her brother, Rowan, and herself.

Fantasy novel about Persephone May, a 30-year-old foundling who discovers her family are witches, trapped by a curse only she can end.

Middle-grade medieval fantasy novel. In the midst of a war, a monk finds a mysterious girl out of prophecy and nurses her back to health. As Beatryce recovers she recounts fabulous tales, and Brother Edik realizes that people are searching for her, and the king wants her dead. Illustrated by Sophie Blackall.

Literary novel with SF elements. A long-lost book from ancient Greece has effects on three different times and places: 1453 Constantinople, present-day Idaho, and an interstellar ship bound for an exoplanet.

Garber, Stephanie: Once Upon a Broken Heart

Young-adult fantasy novel. The first in the eponymous series, a spin-off from the Caravel series. Evangeline Fox offers the legendary Prince of Hearts a bargain when she learns her love is about to marry another.

Horror novel. Sadie unexpectedly becomes the Liar in Red Valley, California — keeper of secrets, with power enough to remake the world (with enough blood) — but what she wants is answers.

Young-adult fantasy novel drawing on African mythology. Two teens in the jungle city of Lkossa, where magic has been driven underground, help each other after an attack by an ancient creature.

Horror novel, a reimagining of Washington Irving’s “The Legend of Sleepy Hollow”. Local boys like to playact the Horseman’s story, but when they discover a headless body in the woods, they start to wonder if the Horseman was actually real? Or did the legend hide something even worse?

One night in August a huge new star appears in the sky, leading to a series of strange events. Translated from the Norwegian by Martin Aitken.

Non-fiction collection of neo-Platonic dialogues on cybernetics and its influence on culture and ethics. This is the first English-language edition, translated by Peter Butko from the Polish.

Young-adult fantasy novel, the first book in the Class Chronicles series, set in a city where only those clearly light or dark are welcome, and those in-between classes begin to rebel. Half-caste Evie gets close to Prince Cass to find out what the king is planning, and finds him more charming than is safe.

Far-future SF novel. Autonomous Maintenance System Unit Four defends a mine orbiting Jupiter, but when captured by aliens that look like it, it begins to question everything it thought it knew.

Horror novel. A woman returns home, encounters a masked intruder, and flees. When she wakes up in the hospital she is told she killed the intruder in a very deliberate and horrific fashion. She must search her suppressed memories to discover the truth.

Post-climate-apocalypse SF novel. A young woman infected by a deadly parasitic fungus on a devastated Earth must choose between a chance at safety at a legendary college, or helping her ravaged community and ailing mother.

Moore, James A.: The Godless

Epic fantasy novel, the fifth book in the Seven Forges series. The war with the Sa’ba Taalor has ended, but troubles continue, including a spate of murders, a necromancer stealing souls, and an army of the Godless who are following a new master.

Fantasy novel, the second in the Scholomance trilogy about a deadly magic school. El Higgins plans to survive graduation, but she must resist her foretold destiny of dark sorcery and destruction if she wants her friends to make it out too.

Year’s best anthology of 27 short SF/F stories from 2020, with a discussion of the year by Strahan and a list of recommended reading. Authors include Charlie Jane Anders, Yoon Ha Lee, Ken Liu, and Tochi Onyebuchi.

SF novel, the third in the Empire Games trilogy set in the same world as the Merchant Princes series. Disgraced worldwalker Rita and her intertemporal-agent mother must deal with an inter-timeline coup, a renegade British monarch, and robotic alien invaders.

The first collection of Allen’s personal drawings and paintings. Each character is accompanied by a line of text, a poem, or a brief story, building into an overall narrative journey into the mind of the artist. This is an oversize trade paperback with French flaps.

May 31, 2014 admin Comments Off on New Books, May Supplemental

tangled up in "-punk"