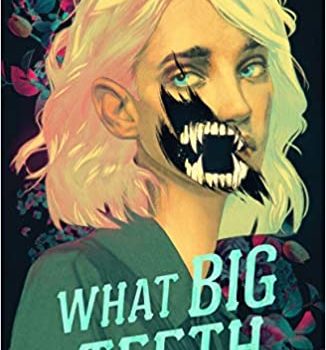 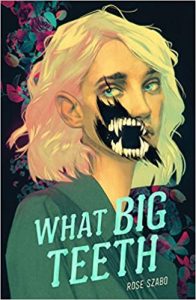 Eleanor Zarrin’s family is a weird and violent bunch. They read fortunes in the guts of birds, go running in the woods just for the hell of it, and also don’t have any table manners, among other quirks. But, they’re the only people that Eleanor can turn to after a terrifying accident occurs at her boarding school. Left with plenty of questions and nowhere to go, Eleanor returns to a family that prowls her dreams and nightmares.

Family secrets, hungry werewolves, and mys­terious visitors are the foundation of What Big Teeth, Rose Szabo’s debut YA gothic fantasy novel. Eleanor, a reserved and brooding young girl, must keep her estranged family together while battling a frightful darkness within herself. Her self-discovery comes against the backdrop of the dreary, Dracula-esque Zarrin household, where wild relatives run amok in the woods, and her nightmares lead her to terrifying conclusions about herself and the accident.

What Big Teeth is saturated with tropes of the gothic genre – an old house, vivid dreams, restrained violence amidst elegance, and nods to Edgar Allan Poe, among other horror clas­sics (Dracula as a notable comparison). Szabo delivers on the weirdness, menacing pace, and unsettling themes. Half the fun of the novel was reading depictions of this bizarre house and its inhabitants. The other half of the fun was when the book was over, and I realized that I could have never predicted Eleanor’s disturbing revelations about herself and her family.

One realization that left me unsettled about What Big Teeth was that no one was worth root­ing for. The nuns are wicked, the family friend has secrets of his own, and even Eleanor seems to have little inclination to do good unto others. While I didn’t want anything bad to happen to the Zarrin family, I didn’t have much of an incentive to want anything good to happen to them, either. What should have been mere eccentricities turned out to be unexplained hatred for their neighbors, and their cruelty did not always seem central to the plot. The Zarrin family, in fact, was so notori­ously difficult to be around that it took a funeral and some dangerously wielded magic to get any guests to visit. A detail like that is something I wanted to savor (imagine a family so terrible to be around that an entire town avoids them) but each character was so confidently flawed and unwill­ing to change that I became a passive bystander while reading.

Every Zarrin seems hellbent on making poor decisions, whether it is with their romantic lives or previous tragedies that are rarely disclosed. Perhaps these collectively terrible decisions are because of generational trauma or animalistic instincts. Regardless, it was always unclear just how much self-control they actually had, or were unwilling to exhibit. Midway through the novel, I was curious if there would ever be a villain worse than the family, and realized the only way I would enjoy the novel would be to go along for the ride, without trying to guess where it would take me, or who would be the final villain to defeat. I wanted the Zarrin family to be like the Addams family, but I found myself seriously uncomfortable throughout the novel, and not at all entertained by their behavior. Even after learning more about the family, I had so many questions about why they chose to act like this in the ways they did.

I found Eleanor particularly frustrating, until the end of the book. While it’s understandable that estrangement would make it difficult for her to as­similate back into her family, I found it a bit odd that she had forgotten some things seemingly ingrained in her as a child. I had to take a few deep breaths every time she seemed to get herself into unnecessary trouble. Aside from Eleanor’s naivety, there was an awkward childish element to each adult character that made it seem as if they were playing dress up in a house that no longer fit them. The unease never seemed to end, and Szabo deserves a heaping amount of praise for consistently sustaining this mood throughout the book. The title of the book is perfect for the surprise ending.

What Big Teeth has a pacing and literary flair to it that is quite unique and difficult to put my finger on, but it’s unlike anything I have read. What I re­ally enjoyed is how well atmospheric and detailed Szabo made this story. Their ability to incorporate horror elements of this novel was akin to dampness – seeping into the corners of the page and permeat­ing each chapter.

What Big Teeth is a deliciously creepy story about irredeemable family secrets and the monsters we contain within ourselves. The pieces of this book work like an elaborate puzzle, but are worth putting together by the last page. 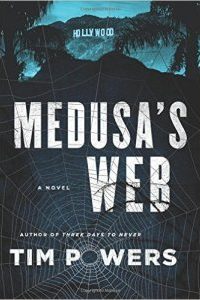