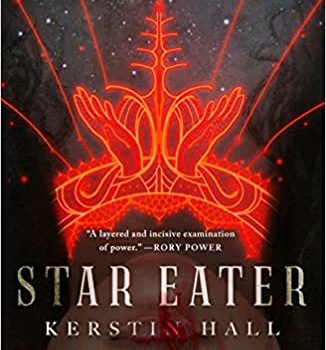 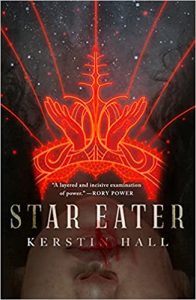 Kerstin Hall’s novella, The Border Keeper, came out in 2019 to no small acclaim and at least one award nomination. Star Eater demonstrates that the prom­ise of The Border Keeper wasn’t a flash in the pan. This is an exquisitely gripping novel with a bloody, unflinching heart. And yet, for all the intricate bru­talities of its worldbuilding, it holds out the hope of revolutionary change.

Those intricate brutalities include ritualised can­nibalism, coerced reproduction, eugenics, hetero­sexually transmitted monsters, infant murder, drought and food shortage, and other interesting things: Hall isn’t holding back from the gory in her examination of elites who dominate a society by quite literally eating their own.

The Sisterhood of Aytrium is the ruling power of the city of Aytrium, which they keep afloat above a region haunted by monsters. The Sisterhood’s power is heritable, but it’s fueled by martyrdom – the flesh of their mothers, who are inducted into a kind of irreversible magical coma so that their flesh can be harvested. Sisters cannot have sexual relations with men, because too close contact with their power turns men into monsters – Haunts, who hunger for the flesh of sisters – but as their power is inherited down the bloodline, and their society is built on their power, they nonetheless are required to reproduce, and partners are found for them in the form of con­demned criminals. Sisters are required to attend such “Renewals” regularly.

Elfreda Raughn’s mother became a martyr only about a year ago. She’s a junior sister. Her job is in food management and supply, and Aytrium is facing a food shortage of significant proportions – and a drought. Her day-to-day duties are tolerable, but she desperately does not want to fall pregnant. Or to attend anymore Renewals. As soon as she gives birth to a girl child, the clock starts ticking on the countdown to her own martyrdom. El suffers from unpredictable visions – detailed hallucinations – that only the presence of her friend Finn and, sometimes, Finn’s sister Millie, can help. She’s kept the hallucinations secret from her superiors, lest it hurry on her own martyrdom, but it’s not particularly helpful to her peace of mind.

When El is approached by a shadowy faction with­in the Sisterhood – who may or may not be aiming at the overthrow of the status quo – she’s torn between distrust (they’re blackmailing her co-operation with a pretty bit of a setup) and hope (they promise they can get her out of Renewals). As their spy, she starts to move among the highest reaches of the Sisterhood, a world full of political tensions and fatal grudges, where a misstep could see a sister condemned to early martyrdom. Something’s going on in the shadows, something that may or may not have to do with one of the factions of the non-magical resistance move­ment that’s been trying to work against the Sisterhood for decades. But things only get more dangerous for El when a sister – her senior in the food supply division – is murdered bloodily in the street. Certain highly-placed women in the Sisterhood would be just as happy if El got the blame. Worse is to come, for El is about to learn that the history she knows of her world is, at best, incomplete, and that incredible power lives in her flesh – power that could essentially remake the world, power stolen from its original possessor. El can change everything – but it’s much more likely she’ll be martyred and the power in her veins used by others. If she wants to survive, she’s going to have to take desperate steps.

Star Eater is subversive novel, and a queer one. It’s interested in bodies and in systems: in intensely embodied power relations, in the reified metaphor of consuming one’s parents, in being consumed by one’s children, in the personal and political horror of control and regimentation of the female body and its reproductive and generative potentialities, in the divisions of status and ambition that even people who suffer under the same systems create between themselves, in and of their bodies and their social positions, and in its interest in scarcity and consumption. The Sisterhood of Aytrium is a trap, but it’s a trap that many of those caught in it believe to be necessary, and some believe to be freedom and power. The queerness of Star Eater rests as much in its unsqueamish examination of power relations and the meaty, bloody metaphor of its magical mechanics as in its normalising treatment of queer relationships and the sexualities of its major characters: it’s a novel with teeth, and it sets those teeth into a thematic argument about – an indictment of – the hereditary transmission and constant maintenance of power that comes from acts of, essentially, theft and consump­tion. One might say rapine.

For all that, though, Star Eater is wildly hopeful about the potential of supportive, subversive commu­nities, about the strength of complicated friendships, about kindness and the possibility of transformative change. The strength of the friendships between El and Finn, between El and Millie, the relationships El has (and had) with and through her mother and her mother’s peers, are particularly important. There’s a sense of a whole web of connections, across genera­tions, both among those opposed to the system in different ways, and those who uphold it. It’s striking how full and complex Hall’s world is here, how invested with communities and meanings. Neither support for the Sisterhood nor opposition to it is an uncomplicated thing.

Hall writes with striking, assured pose, bring­ing her world and characters vividly to life. Both in style and (thematic) substance, her work here reminds me of Max Gladstone’s Craft novels, of Aliette de Bodard’s novel-length fantasy work, of A.K. Larkwood’s blisteringly good debut The Un­spoken Name. (Hardly surprising, then, to find both Gladstone and Larkwood have contributed advance praise.) Star Eater is a fantastic book. I recommend it highly. 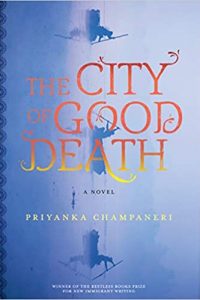