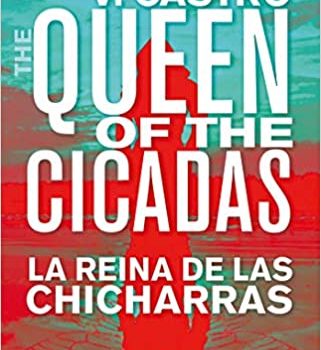 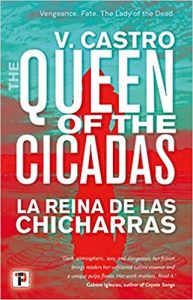 Fortyish Belinda Montoya, protagonist of The Queen of the Cicadas by V. Castro, has overcome a great deal in her life. Despite racism and a dis­advantaged Texas childhood, she became an at­torney in Philadelphia, but things aren’t going all that well now. After two divorces and in the midst of a strained relationship with her teen son Jacob, she drinks too much, sleeps around, and has – to understate it – self-esteem issues. Attending the wedding of a friend at a lovely restored Victorian farmhouse in Texas, she realizes it is the historic location of a vicious murder almost 70 years before, a murder that gave rise to the not-exactly urban (since the area is rural) legend of La Reina de las Chicharras/The Queen of the Cicadas. Like Candyman or Bloody Mary, looking in a mirror and calling on La Reina three times will summon the vengeful victim. Considering Belinda helped her friend plan the wedding for a year, was central to the decision to have it at the place (which has been featured in paranormal-related media for years and attracts guests due to its haunted reputa­tion), and is well aware of the spooky legend, it is hard to believe she didn’t realize it sooner. (The author herself seems to have a little trouble with this point but continues gamely on.)

Belinda, at the reception, informs the newlyweds (or, in the case of the bride, reminds her) and all assembled for the joyous occasion of the bloody 1952 murder of Milagros Santos, an undocumented Mexican worker, and the consequent demises of others involved, except for the one who remains in a vegetative state. Through chapters set in the past, we learn the horrific details of the murder, how it was ignored by the local whites, and the vengeful rise of La Reina de las Chicharras. The Aztec goddess of death, Mictecacíhuatl, hearing the death cries of Milagros, wreaks some immedi­ate vengeance and devises a plot for both of them to be reborn. Belinda teams with Hector, the gay owner of the hotel/event venue, to discover the truth about Milagros. They almost immediately and quite conveniently gain access to documents revealing much about the past. Belinda has been – conveniently – laid off her job, so she has time to play detective. The season is over, so Hector can detect along with her. Hector, conveniently, has a psychic grandmother and is descended from a long line of curanderos and thus has access and experi­ence with hallucinogenic mushrooms, which are handy in breaching the veil between worlds. But finding out the truth about the past is not the whole story.

As I am not-so-subtly hinting, the plot seems a bit weak to this reviewer. Castro’s writing is clear, but not particularly vivid. The best thing about the novel is its accurate portrayal of the life of migrant farmworkers in 1952 Texas. Additional points can be awarded for effective use of Mexican culture and mythology, women-oriented elements, a theme of perseverance, and the condemnation of racism. I suspect more casual readers of horror will find The Queen of the Cicadas a far more satisfying read than I did.

Lila Garrott Reviews In the Night Wood by Dale Bailey