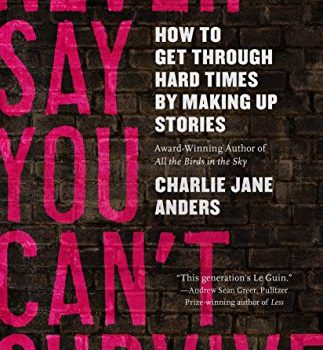 Anders, Charlie Jane: Never Say You Can’t Survive: How to Get Through Hard Times By Making Up Stories

Collection of essays on writing, society, politics, and how to flourish during the the present emergency.

SF novel, second in the Outer Planets trilogy, part of the Grand Tour of the Solar System series. Ilona Magyr seraches for her father, who was lost while exploring Neptune.

SF space-opera novel, second in the Divide series after The Last Watch. The Divide at the edge of the universe is collapsing, and only the Sentinels, dregs of the military, are there to save existence.

Fantasy mystery novel, the first in a series featuring Detective Zaniel Havelock, who can speak with angels, in a world where a precarious treaty between Heaven and Hell depends on human faith and actions.

Syd Chambers knows that there’s life on other planets because he’s descended from it. His father was from a distant world called Denza and has been missing—presumed dead—for years.

When Syd discovers a device his father left behind which shows not only that he’s alive, but where he is, Syd must set out on a mission of his own.

Young-adult novel. A girl grieving for her family and a boy looking for his roots take a road trip searching for ancestors and chasing ghosts. Written in verse.

Untold story based on the Star Trek: Picard TV series, giving the background story of future crew member Cristóbal Rios, and his life as an independent freighter captain.

SF novel, the third in the Finder series about interstellar repo-man and con artist Fergus Ferguson, who is back on Earth, trying to live a normal life. While doing a favor for a cousin, Fergus stumbles across an ancient alien artifact that might mean the whole solar system is in danger.

Historical fantasy novel. Civil unrest plagues the nation of Elsira as refugees from their old enemy, Lagrimar, seek new lives in their land. Final book in the Earthsinger Chronicles series.

Thriller/horror/dark mystery novel, 20th in the Agent Pendergast series. Bodies found with no blood in their veins in Savannah GA may somehow be tied to the 1971 D.B. Cooper hijacking.

Young-adult standalone fantasy novel. The Heliana are winged-lion shapeshifters who live in a flying city, safely protected by skilled warriors until a disease begins to sicken the children.

Fantasy novel about Mel Smith, a grieving woman who finds folk magic and unexpected connections in a small Appalachian town.

Sword & sorcery fantasy novel, the second in the Legacy series. For the first time in many years, the Tressian Republic and the Hadari Empire are at peace. But darkness never sleeps. As the sins of the past are once more laid bare, every road will lead to war.

Every so often you come across a book that seems to act as a nexus, drawing other recently read books into an unexpected pattern, even though they otherwise seem completely unconnected. For me, this year, that nexus was The Dollmaker by Nina Allan (riverrun). One of the two central characters is a dwarf who becomes an expert and sought-after maker of dolls, which immediately called to mind Little by Edward