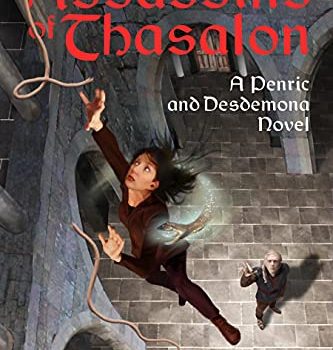 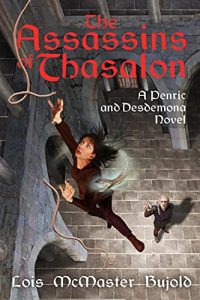 Lois McMaster Bujold is a household name in science fiction and fantasy at this point. She is perhaps best known for her Miles Vorkosigan space opera novels, but personally I’ve always enjoyed her fantasy more: the four-book Sharing Knife series, and the stories in the world of the Five Gods – The Curse of Chalion, Paladin of Souls, The Hallowed Hunt, and lately the stories of Penric and Desdemona, which Bu­jold has opted to publish independently. The As­sassins of Thassalon is the latest of these stories. It’s also Bujold’s first fantasy novel since 2009. True to form, it’s a thoughtful, humane, mature, and compelling novel: the confident work of a writer at the peak of her career.

We first met Penric in Penric and the De­mon, when a rather young Penric found himself abruptly possessed of a rather old and opinionated demon. Desdemona, as Penric came to call her, carries the impressions of twelve hosts before him, all of them female, and in consequence of his new responsibilities, Penric finds himself a calling as a sorcerer-divine in the service of the Bastard, fifth of the five gods and patron of oddities and things out of season. Since then, at least a decade and a half has passed in Penric’s life, and circumstances have taken him from the Weald (site of Penric and the Shaman and, I believe, Penric and the Fox) to the fringes of the Cedonian empire (Penric’s Mission, Mira’s Last Dance, and The Prisoner of Limnos, which form a kind of trilogy of their own, as he rescues a falsely arrested general, Adelis Arisaydia, and escapes with Arisaydia and his sister Nikys to the safety of Orbas, and then returns – with Nikys – to rescue Nikys’s mother). He’s now settled in the Duchy of Orbas, where he’s had to deal with both plague (The Physicians of Vilnoc) and pirates (The Orphans of Raspay). Now married to Nikys, with one child toddling and another on the way, Penric is quite happy as the duke’s court sorcerer and tame scholar. The court politics of Cedonia reach out to draw his brother-in-law back in, though. Shortly after Adelis receives an invitation to return to Cedonia and support one faction in the unstable regency council, Penric and Desdemona have a front-row seat to an attempt on his life. This assassination attempt is unlike others aimed at Adelis before: the would-be assassin is a hedge-sorcerer.

Most people understand that sorcery cannot be used directly to kill another human. This is a mistaken assumption, if only slightly: sorcery can be used to kill, but only once. The death of the target opens the way to the gods, and the Bastard reclaims the demon – leading to its dissolution as a discrete individual. The hedge-sorcerer who targeted Adelis is not on her first demon: when Penric’s trap catches her, he learns that she has been used in this fashion before, and more than once. Her name is Alixtra, and her five-year-old son Kittio is hostage to her compliance in Thasa­lon, the Cedonian capital.

It is normal practice – inasmuch as normal practice applies to sorcerers and demons – to bring a hedge sorcerer to a saint of the Bastard to get rid of their demon. Penric tries this, be­cause without a demon Alixtra becomes solely the problem of the civil power, and not a knotty theological conundrum with political overtones that Penric’s god has tipped into his lap for him to solve. (Some temple sorcerer in Cedonia is recruiting people to be assassin hedge-sorcerers. This is wrong on so many levels.) But alas for Penric and his comfortable domestic round, the god refuses to take back the demon. Alixtra is a sorcerer, and her safety, and her demon’s and Kittio’s, are his responsibility. So is the source of the sorcerer-assassin plot. Now he’s bound for Thasalon with an under-trained sorcerer, a saint, and – of course – Desdemona, where he intends to enlist the aid of Adelis’s fiancée and her loyal retainer. But his tentative plans meet the Bastard’s own chaos when a regency minister is killed and Penric is not the only witness to his sundered ghost.

One of the themes that runs through Bujold’s entire body of work is responsibility. It meshes well with her compassionate and practical theol­ogy in the world of the Five Gods, for The Assas­sins of Thasalon, like so many of the Penric and Desdemona stories, is concerned with care and obligation, the responsibility for people in your care or otherwise under your oversight. Here the concern with parenthood, with care for raising and protecting vulnerable youth, dovetails with the quasi-parental concern of a teacher for a stu­dent, and of a responsible sorcerer for the demon they are paired with. Love – different kinds of love – loyalty, and responsibility all intertwine. As does the numinous: the presence of the gods, their concern for the souls of the living – if not their comfort, or their bodies – suffuses this world, Bujold’s theology is gentle and comforting as it is ruthless. The gods have no hands in the world but the hands of those who work on their behalf. Fortunately, Penric and Desdemona between them have quite a competent pair of hands.

The Assassins of Thasalon is a delight, full of character and incident, and if it were one whit less thoughtful and thought-provoking, I’d call it a romp, because it’s also very fun. Bujold here is at the height of her powers, and it’s a joy to behold.

Faren Miller Reviews The City of Brass by S.A. Chakraborty 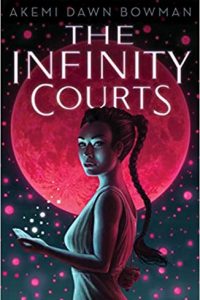 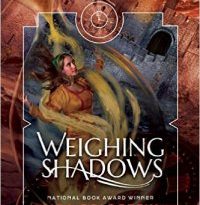