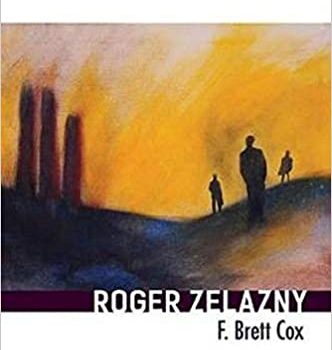 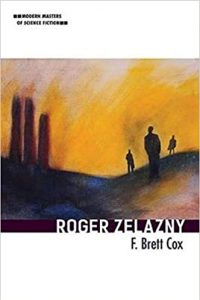 F. Brett Cox’s superlative entry in the Modern Masters of Science Fiction series contains a circular arc of sorts, perhaps in a subtle nod to the narrative games often played by the subject of Cox’s study, Roger Zelazny. Our initial sense of Zelazny the professional writer, and the close, caring friend of notable figures in the SF/F community, is powerfully evoked by the public expressions of loss and appreciation in the wake of his death from cancer in 1995. Following this Introduction, Cox takes us back to Zelazny’s origins, proceeds through five core chapters organized chronologically (birth through 1963; 1964-1968; 1969-1971; 1972-1979; 1980-1995) to cover his major works and life events, and concludes, in an Afterword, at the beginning, with thoughtful ruminations on Zelazny’s end, and what his standing, both critical and popular, may look like in the years to come. Besides these sections, the book contains a fascinating short interview with Zelazny (originally published in 1972), a bibliography, and a handy list of second­ary sources.

Cox’s reasonable objective is clearly laid out. At the time of Zelazny’s passing, conventional wisdom suggested that Zelazny’s top works had all been written in the first fiery phase of his career – particularly the years 1963 through 1970 – and that during the last decade and a half to two decades of his life, his critical reception steadily declined as his popular acclaim rose. “Zelazny’s breakthrough stories and novels were among the best and most important in the history of science fiction,” the story goes, “but little, if any, of his later work displayed the same level of ambition, innovation, or sheer audacity.” A number of writers felt that Zelazny had, for vari­ous reasons, failed to live up to his early, incredibly dazzling, promise. Is this truly so? Cox asks. More importantly, how helpful a view is it?

The answer that emerges from Cox’s incisive and consistently well-researched volume is, perhaps un-controversially, that the aforementioned narrative is schematically correct but incomplete and perforce reductive. A better way to assess Zelazny’s overall body of work, Cox proposes, is to “consider his work in terms of different impulses, always in tension with one another…. Zelazny’s fiction is in continual tension between his ambitions as a literary artist and literary professional and demonstrates a preoccupa­tion with the autonomy of the individual – frequently explored in terms of political violence – that is just as noteworthy as his explorations of mythology and immortality.” Of particular importance is “the steady movement within those works from maintaining in­dividual autonomy via terroristic violence to existing within a larger community, from blowing the system up to living within it,” an idea that re-asserts itself in sometimes apparently disparate texts.

A glance at the chosen years of division in Cox’s chapters seems to implicitly abet the notion that the works most deserving of through examination were frontloaded in Zelazny’s writing journey. Chapters two and three advance Zelazny’s life by only eight years combined, while chapters four and five vault over the succeeding 24. But that’s not an entirely fair reading of Cox’s critical apportioning, since the early works exemplify many of Zelazny’s signature storytelling moves – “breezy energy and stylistic confidence,” an “energetically allusive style,” and so on – and in this sense have to be more slowly and deliberately unpacked, to create a baseline against which to compare the latter offerings. They also define most of Zelazny’s lifelong thematic interests. From the early years, 1965 bears singling out as “a genuine annus mirabilis”: it began with the novella “He Who Shapes”, followed by the novelettes “The Doors of His Face, the Lamps of His Mouth” and “The Furies”, and ended with magazine serialization of his debut novel, …And Call Me Conrad (later renamed This Immortal). Cox analyzes these and many other important early works (“This Moment of the Storm”, “The Keys to December”, “For a Breath I Tarry”, “This Mortal Mountain”, and so on) in detail, offering plot synopses, touching on dozens and dozens of allusions, performing thought­ful, comparative appraisals, and helpfully always incorporating reception into the conversation. We learn, for example, that while Theodore Sturgeon thought that Zelazny’s “The Furies” was a “tour de force,” Frederik Pohl actually rejected the story for Galaxy, on the grounds that it was “difficult to follow, and maybe not worth the trouble.” This, Cox observes, neatly summarizes “a long-term debate about Zelazny’s fiction. Was the author fully, and brilliantly, in control of his materials, or not? Was he so carried away with colliding genre tropes and high literary language that he forgot to ensure it all made sense, or was he simply a wizard whose magic required no explanation?” In the included interview, Zelazny himself offers a partial resolution: his pen­chant for writing from his “weaknesses” in order to consistently improve his craft may have led to the ambition of certain works exceeding their execution. Beyond this, however, Cox admits that “it is difficult not to regret the degree to which, over time, market awareness so often overtook brilliance.”

To get a real sense of Zelazny’s unparalleled genre ascent, consider the following: “By the time of the 1968 Worldcon… Zelazny had completed the first half-dozen years of his career as a professional science fiction and fantasy writer. In that time he had published three novels, a collection, an edited anthology, and approximately sixty works of short fiction. He had been nominated for the Hugo Award eight times and the Nebula Award seven, winning each award twice.” Cox provides useful contextu­alization of this meteoric rise to acclaim within the genre in terms of the New Wave, and parallels and contrasts it with Samuel R. Delany’s similarly ex­plosive arrival on the scene. After probing key works like Lord of Light, Cox instructively points out that “the publication of Nine Princes in Amber three years after Lord of Light and a year after Zelazny became a full-time writer led some to conclude that the first Amber novel was a deliberate shift toward more commercial writing. Both the novel that many consider Zelazny’s finest and the novel that became the opening volume of his greatest popular success were, however, written consecutively.” Cox then makes a convincing case for Jack of Shadows “as a bridge between the first and second decades of his career, looking back to the explosively creative 1960s and forward to the more settled, prolifically commercial 1970s.” My Name Is Legion remains a 1970s highlight: “one of Zelazny’s most interesting and artistically successful books.” Contrast all this with the 1980-1995 period: “…his ever-expanding bibliography could be considered to support the belief that he had largely abandoned the artistic ambitions of his earlier career. From 1980 to 1995 he published twenty-three books. Of these, only two, Eye of Cat (1982) and A Night in the Lone­some October (1993), were standalone solo adult novels.” Cox argues that, along with the novella “24 Views of Mt. Fuji, by Hokusai”, these two novels were Zelazny’s major late achievements. The second series of Amber novels no doubt had a much larger impact; tellingly, however, they were “all but ignored by reviewers in the major science fiction magazines of the day.”

Besides neatly folding in biographical information when it informs a particular text – e.g. “Any reader who knows the events of Zelazny’s life immediately before the story’s [‘A Rose for Ecclesiastes’] compo­sition will be hard pressed not to read the story bio­graphically” – Cox also casts light on how Zelazny handled criticism. A fascinating instance occurs in Zelazny’s 1967 Ozarkcon 2 guest of honor speech, in which he drew on theoretical work by Northrop Frye to challenge comments made by Franz Rotten­steiner and James Blish, who had questioned “the very notion of using the fixed, enduring structures of mythology in science fiction.” Another praiseworthy element of Cox’s approach is clearly separating between critical engagement with Zelazny’s work at the time of its publication, and more contemporary concerns, such as the handling of female characters and issues of cultural appropriation. In Cox’s estima­tion, Joanna Russ offered “perhaps the most concise statement of a critical concern that followed Zelazny throughout his career: ‘Will Zelazny ever write the inside stories of his stories? Can he?”‘ Another persistent matter is that of genre. Throughout his prolific career, Zelazny wrote straight crime, sci­ence fantasy, epic fantasy, science fiction, science fiction mysteries, sword-and-sorcery, and so on, often switching with ease and seeming restlessness between them. While this complicates any literary evaluation by a single set of genre protocols, it also helps explain Zelazny’s far-reaching influence on writers such as George R.R. Martin, Neil Gaiman, Jo Walton, Rajan Khanna, Max Gladstone, Elizabeth Bear, and Laird Barron.

Cox acknowledges that we may not yet be able to really ascertain Zelazny’s long-term reputation or standing in the genre, but laments that “the level of academic analysis and widespread awareness within a broader range of literary communities that has come to the work of such Zelazny contemporaries as Delany, Russ and Le Guin never fully came to Zelazny’s work in his lifetime and has been elusive since his death.” Besides any intrinsic qualities in the work itself, I would posit two additional factors worth considering: first, that these authors lived much longer than Zelazny, and second, that by dint of doing so they lived through, and to some degree interacted with, their own unfolding legacies in a way that Zelazny simply could not parallel. Joanna Russ, after all, died in 2011; Le Guin in 2018; Delany, thankfully, is still with us.

Cox consistently brings great critical acumen to bear on his readings, which are sensitively attuned to Zelazny’s specifics but never lose sight of the broader literary context, and he organizes an imposing array of material in insightful and intuitive ways. He cap­tures the excitement of Zelazny’s work, the thrill of its evolution, the astonishing panache of its heights. I do sense that Zelazny the human being slips away a little towards the end. It would have been nice to know more, for example, about the collaborative comic fantasy trilogy that Zelazny co-authored with Robert Sheckley, not because the work itself demands attention, but to see what might be gleaned from the relationship between these two often highly individualistic writers. Who conceived the project, and was it envisioned purely as a financial transac­tion? What did Zelazny and Sheckley think of each other’s work, etc.?

To be clear, one never doubts Cox’s own invest­ment in or passion for his project. “My brother, James C. Cox, Jr., provided me with my first copy of Lord of Light and took me to my first science fiction convention, the 1974 Worldcon, because Roger Zelazny was the guest of honor,” Cox shares early on. “This all started there.” Surely, for other readers it will now start with Cox’s own book. What fine kindling. 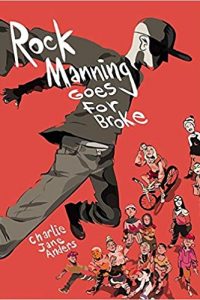