Paul R. Alexander was born September 3, 1937, in Richmond IN, the son of the late Fred and Ora Olive Alexander. After graduation from Wittenberg University in 1959, and then the Art Center College of Design in Los Angeles, he found work in the art field with architectural firms, and then moved into advertising, concentrating mostly on still-life and “men and machines” subject matter.

In 1976 he began working with an art repres 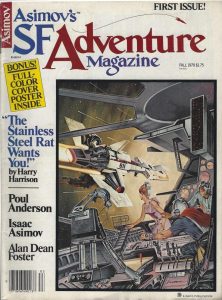 entative in New York who brought his work to the attention of Ace Books. Impressed by his command of hardware and machinery illustration, Ace gave Alexander some assignments. His first published cover was for Ace’s Best from F&SF anthology (1977). He also created the cover for the first issue of Asimov’s magazine in 1978. Although Alexander became as proficient at illustrating people as he did machines, he is still best known for his high-tech illustrations — “one of the top ‘gadget’ artists currently working in the American paperback market” wrote Vincent Di Fate in his entry on Alexander in Infinite Worlds: The Fantastic Visions of Science Fiction Art (1997). His covers for David Drake’s The General series and Keith Laumer’s Bolos series, both for Baen in the 1990s, were particularly memorable, and examples from both series were chosen for Spectrum anthologies.

Alexander worked in gouache on illustration board, airbrush and handbrush. He was one of those rare illustrators who prepared concept sketches only after reading the complete manuscript. An “old school” artist, he always preferred to submit his own ideas for covers rather than having an art director select the scene. While still doing some corporate and advertising art in the 1980s, and SF art into the 1990s, by 1998 he had largely retired from the field and turned his attention to his long-time hobbies of model trains and photography, and to painting for his own enjoyment and occasionally for local church, civic, and charitable organizations. He was a long-time member of St. Paul Episcopal Church. 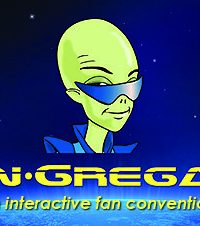