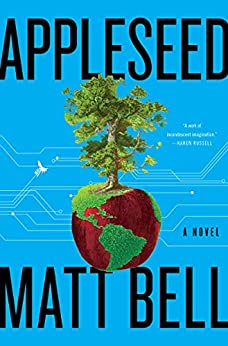 Nonfiction book exploring the entire story of the Star Wars franchise from the beginning. Features the commentaries of hundreds of actors and filmmakers involved with and impacted by Star Wars, as well as writers, commentators, critics, executives, authors, film historians, toy experts and many more,

Epic fantasy novel, sixth and final in the Song of the Shattered Sands series.

Literary SF novel about global warming, starting in 18th-century Ohio and moving into 2070, when one company has come to own most of the world’s resources, and beyond, to 1,000 years in the future when ice covers North America.

Chambers, Becky: A Psalm for the Wild-Built

SF novella, the first in the Monk & Robot series, set in a future centuries after robots gained self-awareness and left their jobs for the wilderness.

Fantasy novel of an amateur cryptozoologist researching the fabled creatures living alongside humans in the mythical land of Yong’an City. Translated from  Chinese by Jeremy Tiang.

SF space opera novel with Lovecraftian overtones, sequel to The Outside, set in a galaxy ruled by AI gods and angels.

Middle-grade SF novel. Eleven-year-old Jillian has always dreamed of joining her space-explorer parents on a mission. When she finally has her chance to visit an alien world the local wildlife starts acting dangerous, and she has to find a way to save her family from the creepy aliens.

Original anthology of 16 gender-bent and otherwise bent and inclusive retellings in the Arthurian mythos, from past to future. Authors include Nicola Griffith, Daniel M. Lavery, Ken Liu, and Silvia Moreno-Garcia.

SF noir novel, the first book in the Water City trilogy set in 2142, when underwater cities are common. Celebrity scientist Akira Kimura feels threatened, and reaches out to an old friend who is now a police detective for help. But she is already dead when he gets there, and he risks everything to investigate.

Morgan, Beth: A Touch of Jen

Darkly humorous horror novel about “a love triangle so toxic that it breaks the order of the universe and unleashes a literal monster.” An insecure couple of service workers both idolize an Instagram star, but when they get the dream opportunity to join her elite world, everything goes wrong and strange.

Futuristic fantasy novel, first in the Dreambird Chronicles. Ji-ji, a biracial slave in the Homestead Territories after the Second US Civil War, enters the Freedom Race in hopes of gaining her freedom.

Epic fantasy novel, the second book in the Fall of the Gods series. Former street rat Buc’s plan to destroy the gods means taking down the ruler and her ally, the Sicarii — who plots Buc’s destruction.

Young-adult SF novel set in a world where Breeders, born in debt to the Corporation, can only improve their lot through reproduction — or rebellion.

Like Gary, I’ve never felt comfortable with “best” lists—too linear, too one-dimensional, too competitive. (I don’t have any problems with making comparative judgments, but ranking an arbitrary set of works always struck me as, well, arbitrary.) And, as he said, who do I think I am anyway? Gary’s second question, about audience(s), is exactly on point… The Locus readership is hardly representative of the whole range of consumers of science