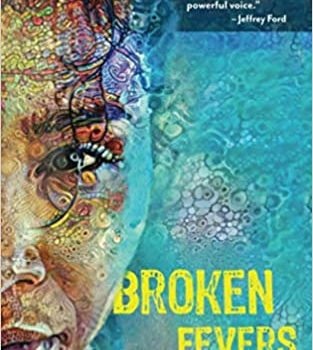 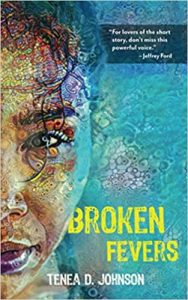 Tenea D. Johnson’s Broken Fevers is a wildly imaginative short story collection that tackles some important topics with style and delivers a healthy heaping of meaning in each narrative, regardless of length. A solid mix of genres, this collection pulls readers into short stories that do a lot more than just entertain.

Johnson sets the atmosphere in the opening story, “Bare”, which is on the surface a creepy tale about a woman removing her skin on a strip joint stage and a commentary about the male gaze, among other things, right underneath that bloody surface. And that’s just the beginning.

“Foundling”, the second story, is much longer than the first. It follows a woman who works securing souls and transporting them. She has a perfect record, but when the inevitable happens and she loses one in less than a second, she’s forced to change jobs. While in her new job, she discovers that there is more going on than meets the eye, and her discovery gets her framed and put in prison. The down time helps her concoct her vengeance, which she starts putting together the moment she’s out. A tale of justice that delves deep into near-future technology and its good and bad possibilities, this story has a truly cinematic feel.

“The Taken”, the fourth story in Broken Fevers, is a standout, and that’s saying a lot in a collection in which there are no throwaways. The narrative chronicles what happens after the kidnapping of a Senator’s daughter. She gets thrown in a cage and eventually a boat along with other abductees. But they’re there not for ransom; the group that took them – they are called The Masks by the abductee – is sending out a message about slavery, justice, and reparations. Johnson communicates all this well and brings history into the mix while simultaneously playing with the role and definition of a “bad” person:

She was trying to remember the diagrams. All her life, she’d flipped past the Black His­tory Month specials, those horrible images somebody should have forgotten by now. But now she wished she could remember. Then at least she would have some idea what the hold looked like. Maybe then she’d know where the blonde girl was and where they’d put the men. She could feel flesh, but the heat made it difficult to tell which was hers. The Masks hadn’t been back down since they’d chained the captives to each other, and then the ship. And she’d been near unconsciousness then.

The beauty of Broken Fevers is that Johnson talks about important things while telling an entertaining story, offering a diverse cast of char­acters, and exploring multiple genres. There are discussions here about racism and social justice as well as a very present feminist undercurrent, but these elements are a part of tales that range from horror and science fiction to fantasy and even crime, and none sound preachy.

“Sugar Hill” is another standout. At once a love letter to New York City and a fantasy nar­rative in which Otherness is centered, this is the kind of story where fantastic elements abound but the character, an Asian trans woman, serves as vehicle for bringing diversity to the page in a natural, organic way. It’s also wonderfully gritty and captures the essence of NYC perfectly:

There are safer stations in the MTA than 155th Street. But few can compare with its entertainments: as Ts’ai-Ho descends onto the platform, a homeless man dressed in tatters shits a yellow load of last night and grunts to himself about the lack of privacy in subway stations. Ts’ai-Ho looks past him, searching the shadows.

Discussing the 14 stories that make up Broken Fevers would take too long, but they’re all worth reading. A few other standouts include “Publish­able Regrets”, which is a column published in a newspaper saying it’s the end of a series they ran with the confessions of the dead; “Only Then Can I Sleep”, which is a very poetic story about rebirth and transformation that brings Nietzsche’s eternal return to mind; and “How the Carters Got Their Name,” which again uses history well and packs a lot into a story that’s barely four pages. It also happens to have a superb opening paragraph:

A lot of Black folks are walking around with their owner’s last name. Or rather their ances­tor’s owner. Others are a little luckier. They’re Johnson from Son of John. Baker ’cause that’s what they did. Cobbler from the skill it took to earn that name. Ezekiel was one of these last. Sometimes he wished he were a son of John, though – ’cause Carters had earned their name in death, and evolution.

Johnson has a unique voice. Her straightforward style makes her message reach readers undiluted, and these stories pack a punch. Regardless of genre of preference, there is something here for everyone, and there is also plenty to digest.