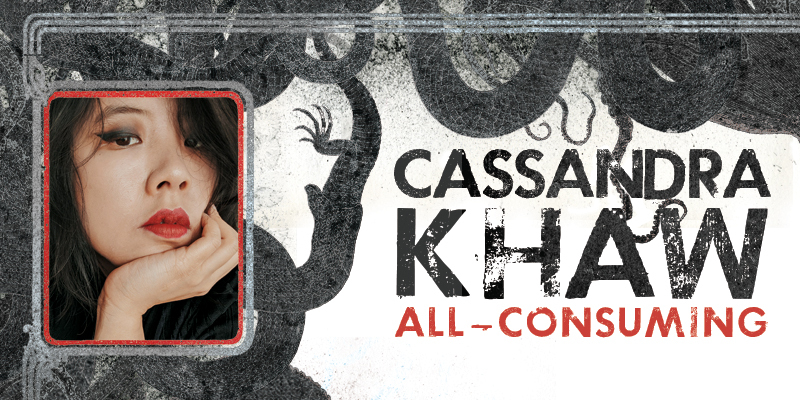 Zoe Khaw Joo Ee was born August 31, 1984 in Kuala Lumpur, Malaysia, but has gone by Cassandra Khaw for the past 20 years. Khaw lived in Malaysia until age 25, then spent ten years traveling before settling in Montreal, Canada. Khaw worked as a journalist and video game writer in addition to writing fiction, and is currently a senior scriptwriter at Ubisoft Montreal.

Khaw began publishing short fiction in 2014, and particularly excels at novella length. The Gods and Monsters series began with novellas Rupert Wong, Cannibal Chef (2015) and Rupert Wong and the Ends of the Earth (2017), collected in Food of the Gods (2017) and continued in debut novel The Last Supper Before Ragnarok (2019). Their Persons Non Grata novella series includes British Fantasy Award finalist Hammers on Bone (2016) and A Song for Quiet (2017). Novella Nothing But Blackened Teeth is forthcoming this October. Khaw contributed two chapters to serial audio series Born to the Blade, created by Michael Underwood (2018). Khaw co-edited Flesh: A Southeast Asian Urban Anthology (2016, with Angeline Woon). They also write poetry and essays.

Next novel, The All-Consuming World, will be out in September. Khaw is also writing a supernatural serial killer duology with Richard Kadrey, beginning with The Dead Take the A Train.

“I spent a lot of time reading as a kid because I was incredibly energetic and both of my parents worked. They eventually discovered I was a voracious reader, so they just buried me in books. Fairy tales, occasional science books, whatever they could find. I kinda ended up a little bit of a hypochondriac because one of the first books they handed me was this giant encyclopedia of medical ailments, and I read it cover to cover at an oddly young age. (My mom eventually told me to stop buying so many books; I was costing them a fortune.) I read everything. I remember Mistress of Spices, and a lot of fairy tales – they’re all mixed up in my head. I’m fond of the old stuff with blood and gore and death and doom. So much doom. I was completely enamored of the Dragonlance series growing up.

“As far as books that might have been a large influence on me, the first one that comes to mind is Richard Kadrey’s Butcher Bird. I grew up on Dragonlance and fairy tales, so there was a sense that there was always a formula to a story: this happens, and then that happens. Butcher Bird just came out of left field, like Kadrey took one look at the idea of genre and just kicked it down in his signature punk fashion. I remember thinking, ‘Oh my god, you can do that?!’ The other books that really influenced me were Frances Hardinge’s, like her entire backlist, although that came later when I was an adult. I picked up A Face Like Glass randomly, I think, because it was discounted at a local bookstore and I tore through the entire book, and was just utterly in love with its poetry. Eventually, I ran off and bought everything else she had written at that point, read through those, and only after I was done did I realize that all of her books are middle grade, and it absolutely stuns me because she has the most beautiful, poetic turns of phrases in there. I realized these were all completely palatable to middle-grade audiences, but the craft there was, well, it really drove home that language is an instrument in people’s hands. You can do magic with it. And her work fascinated me so much I had to go do more of my own with it.

“I wrote my first novel when I was nine, as you do. When I was done, my mother basically went to all the local bookstores and said, ‘If I printed this, could I just put it on your shelves?’ They said, ‘That isn’t how it works.’ She said, ‘What if I paid you?’ They were like, ‘That’s still not how it works.’ Despite the early start, writing fiction kind of fell along the wayside for a long time.

“I actually wanted to be a forensic specialist, and my mother said, ‘No. Absolutely not.” So I got into programming and did AI and web develop­ment for a while, but then a friend asked me to set up a website for him. I agreed, and he said, ‘Do you want to write some articles?’ I did, and then I got very annoyed when no one paid attention to my articles. I decided that was because no one knew who I was, and I started doing the traveling thing, and became a journalist for about five years. Then I wandered into PR, and then somewhere along the line I ended up writing a tie-in novel, randomly, without knowing what I was doing. I was halfway through the novel, and I just sat there going, ‘Oh no. I need to figure this out.’ I started writing short stories from there. I didn’t necessarily always want to be a writer – strangely, I really wanted to play with corpses. It was a long, convoluted path that led me to writing.

“I think it’s because I’m not very bright that I can be so prolific – my solution to a lot of things is rapid iteration. I admire people who can sit forever just studying the mechanics of writing. They’re like watchmak­ers. But I’m not that person, so I basically just keep writing aggressively, trying to see what I’ve done wrong, and if the editors say no, I go ‘Okay’ and keep trying until it works. The only way I do anything is to just keep throwing myself at things.

“Journalism was actually a hindrance in my writing process, because I had to unlearn a lot of techniques. Journalistic writing is incredibly spare, which is maybe why I ended up so baroque in my writing style. Journal­ism did give me an understanding and acceptance of editing, although some of my editors nowadays are like, ‘You can say no. You do not have to say yes to everything.’ I always end up replying, ‘It’s cool. I have no fear of dragging my darlings out behind the shed and shooting them.’ I’m not very attached to any of my words.

“Every publishing house has its own process. Some of them are glacial and meticulous, while others are more ready to leap ahead and go after things. It’s been odd getting used to that, and how different editors function as well. Some editors are very hands off, and some are very hands on, and I’m utterly intimidated by some of them and how they can detect even the smallest plot holes, which they then drag into the light and shake at me, go­ing ‘Why is this here?’ But it’s been interesting to have had the opportunity to get published by so many different establishments. It feels almost like moving between kingdoms, each of them with their own government and methodology.

“Horror is an act of exorcism. I had a really traumatic childhood and early adulthood, and this, combined with the fact that my parents, for some obscure reason, insisted that I watch things like John Carpenter’s The Thing with my eyes open at the ages of six or seven, came together to result in really vivid nightmares – constant, unceasing nightmares, night after night. When I was younger I would wake up screaming very often, and I remember catching myself once trying to run out the door, waking up on my feet.

“Writing horror takes that away. It feels almost like dragging bits and pieces of those dark images out into the light and staking them onto the wall. It’s nothing more academic than that. I write hor­ror to quiet my brain, more than anything else.

“Good horror, to me, isn’t exploitative. If it’s something that is written with a marginalized person as the punchline, no matter how well it’s constructed, it’s bad horror. It’s just terrible when people do things like that. You don’t need to be cruel to scare people. Good horror is something that seeps into the skin. It lingers, almost like the aftermath of a nightmare. It can take so many forms. It can be something subtle that sticks with you and creates a sense of unease. Midsommar was very uncomfortable. I didn’t find it particu­larly scary, but I constantly thought about it after I watched it. Similarly, Ursula Vernon’s The Hollow Places had the same effect. Good horror sinks in, even when it’s almost blatant. Stephen Graham Jones’s The Least of my Scars is also really good horror. When I finished it, I just calmly put down my Kindle, went to the bathroom, and took 30 minutes of shower time because I had to dig the grime out from under my skin. That’s good horror for me. I don’t know when or if I write good horror – I just write what comes to me. I know that’s a really hippy-dippy answer, but images flare up, I have to put them into words, and somehow they seem to resonate with people. They seem to make people uncomfortable, so… this is good? I never know how to react when people say, ‘You’ve given me nightmares.’ Yes? Sorry? What is the answer? I don’t actually want to make you scared, but….”

Read the full interview in the July 2021 issue of Locus. 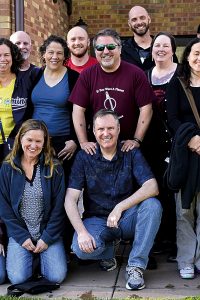 Gary Westfahl: The Addled Archaeology of the Future