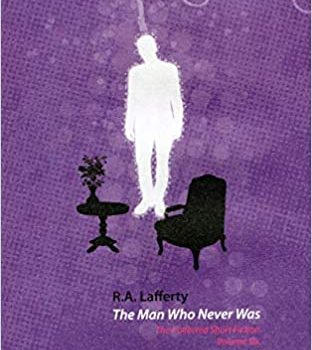 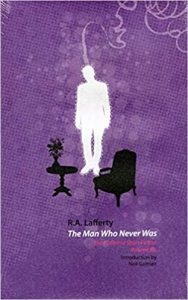 By literally eyeballing the list of Lafferty short stories at ISFDB, I get a rough count for his canon of some 200 to 250 short stories. This figure consorts with what his Wikipedia entry maintains. The current Centipede Press series collecting his less-than-novel-length oeuvre is featuring about 20 stories per volume. So now, with Volume Six, we are approaching or are actually just past the halfway mark of restoring his short fiction to a new readership. It’s been a magnificent achievement so far, in terms both of the craft of bookmaking and of the literary thrills engendered. Everyone involved deserves a round of applause. If you visit my review of Volume Three from five years ago, you’ll see some specific citations of individuals involved (as well as a few minor squawks about the lack of cheaper editions for the mass market).

But alas, very tragically, one of the notable crew has departed us at much too young an age. Editor John Pelan passed away in April of this year. He left us the Afterword to the current Lafferty volume, and I only hope that his absence will not stymie or hinder the continuation of this magnificent project that forms part of Pelan’s literary legacy.

In that Afterword, Pelan reports on a reader who complains, basically, that a little Lafferty goes a long way, and that these volumes amount to too much of a muchness. (That frustrated consumer should have contented himself with the recent compact collection The Best of R.A. Lafferty.) Obviously, I don’t feel this way, nor do many others. While it is true that Lafferty’s voice and themes and angles of attack were very idiosyncratic and persistent, highly recognizable from one story to another, his fictions do vary across a certain spectrum of effects, as Neil Gaiman points out in his fine introduction. The same “complaint” might be lodged against The Collected Stories of Theodore Sturgeon (North Atlantic) or The Collected Stories of Jack Williamson (Haffner). It seems to me that if you really enjoy an author, seeing more of them every year or so is a happy-making occasion rather than a cause for ire.

In any case, let’s have a look at a few of the items here. Pelan opted for a non-chronological assortment technique, so that we have Lafferty’s very first genre work here, as well as items from two decades afterwards.

Lafferty always had a grand time with the metaphysics of existence. How could we know whether an object or person really existed or not? Things and folks wavered in and out of reality all the time in his tales. In “The Man Who Never Was”, a person is willed by a magus-type figure out of life—or is he?

The trope of reliving one’s life over and over in order to make different choices gets a brisk workout in “Maleficent Morning”. While Borges gets praise from academicians and literary critics for such tales as “Tlön, Uqbar, Orbis Tertius” and its treatment of mythical worlds hiding in plan sight, Lafferty’s equally brilliant handling of the theme in “What’s the Name of That Town?” receives less than its deserved share of kudos.

Nobody could do jolly death and glib destruction better than Lafferty. It invoked a kind of Buddhist or shamanistic disregard for the corporeal vehicle we all cherish so vainly. “The bird sliced Widepicture sheer in two, gobbled up both pieces of him, and then withdrew from the broken room with a clatter of ungainly wings like thunder run backwards.” Such is the fate of one of the protagonists in “Oh Tell Me Will It Freeze Tonight”.

Although often painted as a primitivist and naif, Lafferty knew the genre specifics of his era inside out, and thus was able to manipulate them adroitly for surreal outcomes. “Quiz Ship Loose” is a Star Trek: TOS episode on hallucinogens, as the crew of a probe ship find themselves on a planet of superior beings. And oh yes, calling the teleport device the “Instant Chute” is genius.

One might be entering John Crowley’s Aegypt sequence when starting “Groaning Hinges of the World”, and the disorientation is fully as great as in Crowley’s quartet.

The only indication of the turning over is a groaning of the World Hinges too brief to terrify. That which rises out of the Earth has the same appearance in mountains and rivers and towns and people as the land that it replaces. The land and the people do not know that they have turned over, but their neighbors may come to know it. A man looking at the new, after the land had turned over, would not see it different from the old: and yet it would be different. But the places and the persons would have the same names and appearances as those they replaced.

I first read “Slow Tuesday Night” over fifty years ago, and it’s never left my brain. My absolute favorite Lafferty story for its droll hyperbolic applicability to our modern era and for its bittersweet compression of a man’s whole rags-to-riches-to-rags arc.

Here’s “Day of the Glacier”, Lafferty’s first pro sale (he had three prior outings in small literary zines) and it’s replete with Us-versus-Them Cold War shtick, yet still off-kilter enough to reveal what was to come later in his style and concerns. So many of Lafferty’s stories partake of and embody the prevailing myths and fads of his day—manufactured pop stars; the Man in the Grey Flannel Suit; rogue computers—that his stories are a time-travel machine for anyone who lived through that period. I sometimes wonder if these superficial trappings and ornaments and assumptions might dissuade a young reader from appreciating what is eternal about them.

Although werewolves lie at the center of “Three Shadows of the Wolf”, the vast bulk of the story is more naturalistic and mainstream than much else of what Lafferty wrote. One could almost imagine him having a career like that of, oh, Michael Crichton or John Grisham if he had wished for it and been consistently able to tone down his brilliance and jaggedness.

Lafferty’s opening sentences and paragraphs always sucked the reader right in. So it is with “Lord Torpedo, Lord Gyroscope”. Please indulge my lengthy quote, just so I can convey some of the juicy savor of Lafferty’s voice.

Karl Riproar was the unusual son of two torpedo-makers, Epstein Riproar and Nastasia Hectic-Smith. Karl was extremely hyperactive in both mind and body. He was a genetic and chromosomic freak, as are all extraordinarily hyperactive persons. And he was descended from a short line of such freaks. By heredity and induced mutation and massive chemical and magnetic intrusion, he became one of the very active and hectic ones.

Epstein Riproar who was Karl’s father had been a hyperactive and violent man, an intelligent but erratic doctor and designer who found himself outside the law because of his manufacture of torpedoes. These torpedoes were not the physically explosive directional underwater bombs. They were people who were hyped up to carry out such violent assignments as were given to them. They were powerful and swift, and perhaps they were intelligent. Anyhow, they were of surpassing speed in mind and body, and of relentless strength and power and impetus. There was some argument as to whether the ‘torpedoes’ were chemically stuffed and stimulated, or whether they were actually mutants. Well, Epstein Riproar made every kind of torpedo that there was any market for, and he sold them to eager buyers for top prices. These torpedoes could be used for hit men or for assassins of every type. They could get in and out of any jam. Because of their speed of attack there was scarce any protection against them. Such mentality as they had was of the high speed variety. They could conceive and carry out a murder or mutilation in a tenth of a second.

Karl’s mother was Nastasia Hectic-Smith, a hyperactivist and incendiary and maker of torpedoes herself. She herself had gone through genetic tampering that was deliberately designed to double her activity and relentlessness. It also, by one of those slip-ups that sometimes happen, doubled her intelligence, which was already high. This was not necessarily a disaster.

And lastly, with “Marsilia V”, we get a humorous war story that might have flowed from the pen of Frederic Brown or Eric Frank Russell, in which the milquetoast intellectual soldier triumphs over his comrades who are “good-hearted though; just mean everywhere else.”

Utterly unique, the Late-Blooming Lafferty singlehandedly expanded the territory that fantastika could claim as its own. He built tesseract houses of infinite dimensions that were marvels to inhabit—until they juddered and snapped shut on their visitors, trapping them in a glorious eternal tangle. 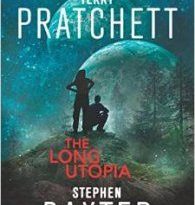