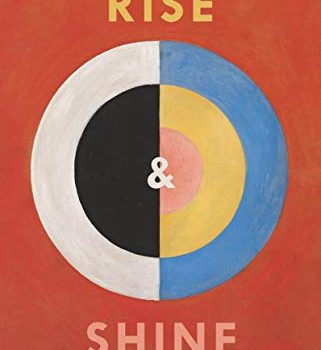 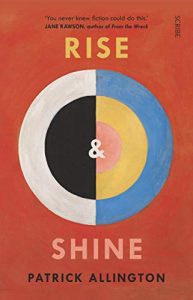 I’ve noticed that I seem to be gravitating toward post-apocalyptic fiction. This is not something I set out to do, and yet when I look back at my col­umn over the last seven months, I’ve read at least six post-apocalyptic novels (more if you include dystopian fiction). What’s striking about these books is that they are wildly different in tone and execution, ranging from an experimental fable (Fauna by Christiane Vadnais) to a moral­ity tale about punishment and discipline (The Last Good Man by Thomas McMullan) to a hard-nosed climate catastrophe (Hummingbird Salamander by Jeff VanderMeer). If I dig fur­ther back to books like Ghost Species by James Bradley, The Theory of Bastards by Audrey Schulman, and Last One’s Left Alive by Sarah Davis-Goff, it becomes clear, at least to me, that some of the most innovative genre fiction writ­ten over the last several years have been about the collapse of civilisation. Patrick Allington’s second novel, Rise & Shine, is further evidence of this, a story about the apocalypse told as an absurdist black comedy.

The novel begins with a short, though vivid, description of how the world ended:

No one who survived could really say whether it was a single big catastrophe, or a series of smaller messes, or if it was just the slow grind of excess…. The details hardly matter now. The earth, pushed past its limits, began to eat its own. Most of the eight billion victims died over a period of a few months. Quickly, slowly: these things are relative.

The few survivors are rescued by Walker and Barton, two friends who, in their desperate search for food, stumble across a new form of sustenance. Skip thirty-four years, and what’s left of humanity now inhabits the city-states of Rise and Shine, governed by their saviours Walker (Rise) and Barton (Shine). The residents live in relative comfort despite the fact their bodies are riddled with tumours, everything organic is poisonous, and both cities are fight­ing an endless war against each other. We soon discover it’s that very conflict that is keeping the population alive. Each morning, over breakfast, the citizens of Rise and Shine tune into edited highlights from the war-zone and are nourished, both emotionally and literally, by their compas­sionate response to the violence and suffering they witness.

Rather than toggle between the two cities, Al­lington centres the action on Rise. We encounter Walker, emaciated, desperately sick, and so close to death, yet still focussed on safeguarding the population. He is assisted by his dedicated Chief Medical Officer, Curtin, who does her best to keep Walker alive, and his boisterous Chief of Staff, Hail, who spends his day shit-stirring Walker, based on the theory that his boss was “at his best when he was mildly irritated.” Allington also gives voices to the residents of Rise. There’s Sergeant Sala, a soldier from the front-line, forced to return home after she is shot in the face, a moment captured on film that goes viral across Rise and Shine. There’s Flake, a family man with two kids, sickened by his sexual response to a still photo of Sergeant Sala’s wounded face. There’s Grainy, who, along with a growing number of citizens, finds he can no longer stomach the war footage. And Malee, who feels “there had to be another way to do this… another way to feed the people,” and starts growing a single vegetable in her garden. There are other perspectives as well, far too many for a novel this slender, but ultimately the story circles back to the relationship between Walker and Barton and their differing views on what’s best for the human race.

Rise & Shine is a funny novel. The dialogue-driven narrative lends itself to some great banter, especially between Hail and Walker, and then later Sergeant Sala’s “give-no-shits” attitude to anyone in power. Allington is also not afraid to play up the absurdity of his premise, whether it’s the overly polite officers who interrogate the dissenters or a family giving thanks for the battle they’re about to witness. In the end, though, the novel’s best gag, a beautifully judged bit of black comedy, is that it takes the death of billions and the devastation of the planet for humankind to find a practical use for compassion. To this, Allington adds a cynical twist: not all forms of empathy are the same; there’s no sustenance to be gained from walking an old lady across the road or giving charity to a worthy cause. It’s only the intense emotional reaction to pain and anguish that fills a person’s belly. However, as the narrative unfolds, Allington (via Barton) makes the case that empathy of this type has a short expiry date; people need something more substantial, such as growing their own food, to survive. It’s an observation, central to Rise & Shine, that resonates, that speaks to the current moment, to how we’ve become inured to tragedy: the mass shootings, the violence against women and people of colour, the natural disasters caused by climate change. It’s not because we’re cruel or apathetic, but because our Government’s re­fusal to address these issues, instead relying on thoughts and prayers, means our compassion has become nothing more than empty calories. 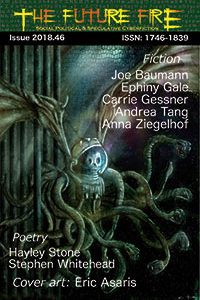