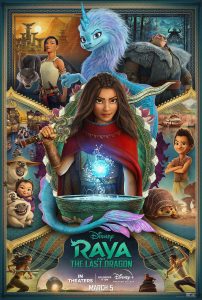 Five hundred years before the start of Raya and the Last Dragon, the vibrant land of Kumandra is attacked by the Druun, monsters that turn their victims into stone. Kumandra’s guardian dragons band together to defeat the Druun, but in doing so are petrified, leaving behind only a magic gem infused with their power.

In the struggle for control of the dragons’ power, Kumandra splits into five tribes — Heart, Fang, Spine, Tail, and Talon, each with distinctive geographies — and each tribe takes a piece of the gem for itself. Then the Druun return.

Josh: What an incredible world they built! Using Southeast Asian culture and folklore and stories we don’t often find in mainstream fantasy, which was really nice to see. I ended up comparing it to Onward, since that was the last Pixar kind of high fantasy movie we reviewed, and I like Raya‘s worldbuilding a lot more, but I still find Onward‘s emotional impact stronger.

Arley: I thought Raya was fine. It was decent. It didn’t have that emotional hit like Up. I would call it a good movie, if it had a more emotionally resonant story. Like, it’s well constructed, it’s well written, all the pieces are there but it just doesn’t quite click. But, you know, I’m glad I watched it.

Now, Raya (Kelly Marie Tran) is on a quest to locate the last dragon, Sisu (Awkwafina), recover the gem fragments, and restore the land to its former health. She’s accompanied by her faithful pet/steed, Tuk Tuk (Alan Tudyk), and pursued by warrior princess Namaari (Gemma Chan) and Fang tribe soldiers.

Exploring shipwrecks, raiding temples, and navigating night markets, Raya gathers a team of orphans and misfits to help her, including a boy named Boun (Izaac Wang), a baby (Thalia Tran) with her own gang of pickpocket monkeys, and warlord Tong (Benedict Wong). They are all from different tribes, but they’ve all lost someone to the Druun, and while the message of friendship and unity may be glaringly obvious to us, the audience, it’s less apparent to the people actually down in the muck, surrounded by tragedy.

Arley: There are hella writers on this movie, and when I saw that many names I was surprised it wasn’t more of a mess, because usually that many cooks in the kitchen will just mess everything up.

Josh: Yeah, it was a pretty coherent plot and didn’t leave a lot of gaps. It was fairly predictable from the beginning: they tell Raya she’s the last guardian of the stone and I thought, okay, well she’s going to mess that up somehow and have to go on a journey to redeem herself. You can see the betrayals coming a mile away, etc.

Arley: This could be an impact from having all those cooks in the kitchen, because I felt like it’s hitting these checkboxes, but it’s not hitting the notes. Okay, we have the single dad, we have the family stuff, we have the “saving my people” stuff. So they set up the themes in the beginning and carried it through the middle, but it didn’t feel like a revelation, it didn’t feel like an “aha” moment. They carried through the themes properly, sewing it up at the end, the way that they should.

Josh: It is a Disney movie — I’m not expecting them to take a lot of risks, storywise. One cool thing they did do was set up the end to rely on the antagonist, so that the villain’s journey was almost as important as the hero’s journey. Everybody in this movie sees themselves as the good guy, they all have understandable motives, and there is this implacable, external threat coming for everyone, so it wasn’t just cardboard villains all the way down.

There are a lot of elements to recommend the movie: the humor is good, the Indiana Jones-style antics are fun (Raya’s whip-sword, in particular, is awesome), there are strong female leads, and some of the set pieces are gorgeous. It skews toward a younger audience, naturally, but older viewers will still enjoy it. Tuk Tuk, kind of a cross between an armadillo and an armadillidium, is just one of the many small details that build up to a unique fantasy world.

The story avoids falling into a monotonous quest narrative — travel here, collect the gem, travel to the next place, collect the gem — because each location offers its own mini-arc, with different solutions to varied problems. It never becomes a video game series of checkpoints, and each added member of the quest party contributes in vital ways.

Josh: My wife’s favorite character was the baby.

Arley: Yeah, I liked the baby! But I was also cognizant of the fact that I was being manipulated by the baby as a character. Which I didn’t mind. It’s like baby Yoda. That’s fine, it’s cute. Now you’re just playing with my emotions, it’s fine. You’re just selling toys. However, the animation in general is a highlight, it’s just really great. I love the expressions, the color schemes. I love the textures of the dragons. Sisu even looks like Awkwafina when she shapeshifts. That said, for Awkwafina’s body of work, this is probably one of my favorite performances of hers.

Josh: It’s probably one of my favorite Alan Tudyk performances.

Arley: Even the enemy creatures were cool. The basic look is familiar but then they added this thing where when they move they kind of stretch out and it’s all stringy. Throughout the movie there are these little embellishments that made things really interesting.

Josh: One of my only complaints was that when they were showing the scenes with all of the dragons, I think it was during the crystal formation, and they’re all multicolored, I thought, “This looks a little My Little Pony right now.” It was a bit too flashy, like it almost belonged in a different movie or series.

Raya and the Last Dragon also brings to Disney canon a less-familiar viewpoint on dragons. Whereas in Western stories — from “Beowulf” to St. George to Tolkien — dragons are seen as maiden-abducting, wealth-hoarding adversaries to be slain; in Raya (as in the cultures that influence it) they are symbols of prosperity and fortune, and the reverence that each character has for them is strikingly beautiful. Young Raya and Namaari describe themselves as “dragon nerds,” Namaari salutes their stone statues, and even the most battle-hardened characters are reluctant to cause any harm to a dragon: a sharp departure from previous Disney portrayals such as Maleficent and Madam Mim.

Arley: I liked that rain is used as a positive in this movie. Usually a downpour is used to signify darkness, depression, or negativity, but rain equals life! Even in the one moment where it had a slightly negative connotation, when Sisu was upset about something, Raya hops up and she has a big smile and she’s like, “Why the downpour?!” So they even counterbalanced that moment with brightness. Final thought: We need more movies like this. Long overdue.

Josh: This world is so cool, and the characters are all fleshed out enough, that I’d like to see some more stories set here. Ultimately, I’m usually very against the love stories in a lot of Disney films, but Raya and Namaari were like, “We’re enemies, we’re both strong warrior women,” so I felt like it would fit. Maybe that’s where they end up. I hope they fall in love.

JOSH PEARCE, Associate Editor, started working at Locus in 2016. He studied creative writing at SFSU and has sold short stories and poems to a variety of speculative fiction magazines. Find him on Twitter: @fictionaljosh or at fictionaljosh.com. One time, Ken Jennings signed his chest.

ARLEY SORG, Senior Editor, grew up in England, Hawaii, and Colorado. He lives in Oakland CA. A 2014 Odyssey Writing Workshop graduate, Arley is co-Editor-in-Chief at Fantasy Magazine, Associate Editor and reviewer at Lightspeed & Nightmare magazines, interviewer at Clarkesworld Magazine, and reviewer for Cascadia Subduction Zone Magazine. He can be found at arleysorg.com – where he has started his own “casual interview” series with authors and editors – and on Twitter (@arleysorg). 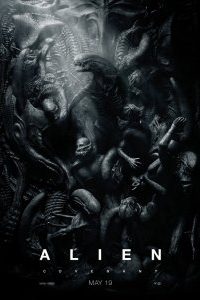 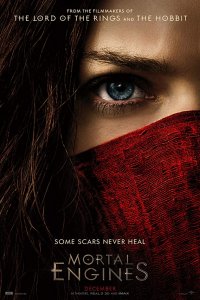 A Myriad of Texts, Reloaded, or, The Cliché-Hoarder’s Guide to the Galaxy: A Review of Jupiter Ascending