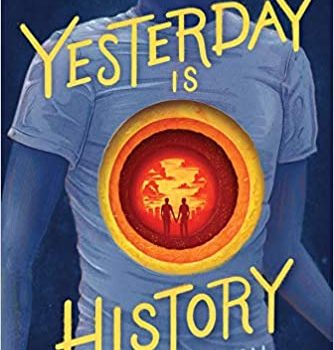 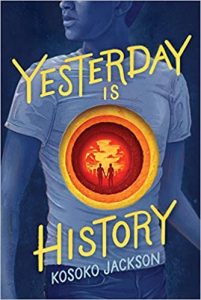 Seventeen-year-old Andre Cobb has survived cancer and is six months into receiving a life-saving donor liver as Kosoko Jackson’s achingly romantic time-travel drama, Yesterday Is His­tory, opens. Andre is dearly loved by his parents, has a great best friend and, while he is struggling in school due to his illness-related absences, is still fortunate enough to attend a first-rate private Bos­ton academy. Cognizant of his privilege, Andre is also restless and uncertain if his long planned pursuit of a medical career, heartily supported by his parents, is really the right choice to make. Then, in the midst of a stressful moment, he finds himself transported from his bedroom into the street in front of his house and quickly realizes that he has also been sent back in time.

So, here we go! It’s time for a grand adventure dealing with paradoxes about changing history and traveling to see famous people do famous things!

Or… it’s not. Yesterday Is History is far more focused on one story, one young man, and sev­eral big decisions about how his life is going to change. In 1969 he meets another teen, Michael, who is facing big challenges of his own. And then back to 2021, where he returns after a tantaliz­ingly brief conversation with Michael, Andre has to figure out what is happening and how to control it. Fortunately, his donor’s family gets in touch and start teaching him about time travel, which is a genetic gift he has apparently picked up from his donated liver. They think it’s a great thing with little downside (as long as you follow some Prime Directive-like rules), a somewhat naive conclusion that Andre promptly dismisses while pointing out that he is Black and far more at risk in the past than they are. While he tries to learn what he needs to know, he finds himself jumping back to 1969 and Michael with little control. It seems they have formed a connection, which becomes much more significant when they acknowledge that both are gay.

Jackson dispenses with how time travel works very quickly, narrowing down on the relation­ships between Andre and Michael in the past and Andre and Blake, his donor’s brother, in the present. Blake is supposed to be teaching Andre how it all works, but his family is dealing with a massive amount of emotional fallout from their grief and no one is communicating well, which means Andre isn’t getting all the information he needs. He and Michael are also falling hard for each other, which brings into sharp relief how, as compared to 2021, being gay in 1969 is fraught with an enormous amount of peril. Even with only occasional visits, Andre is often the only bright spot in Michael’s life. But Blake… Blake understands how chaotic time travel can be and sees the impossibility of Andre’s love. On top of everything else is the weight of keeping all of this a secret from everyone he cares about and the fact that Andre’s physical health is still fragile. In the end, it’s not so much that he has to choose as that choice is thrust upon him, and he has to figure out how to make his love strong enough to survive it.

Yesterday Is History is a beautiful, romantic story that also manages to pack in a lot about growing up and taking ownership of your own future. Andre’s reflections on how race is a per­sonally significant part of the time travel experi­ence is a welcome aspect to the narrative, as are the discussions about how Michael’s existence as a young gay man in 1969, even though he is white, also places him in peril. More than any­thing though, this is a novel about the best kind of love: the sort that enriches everyone involved and endures long after a first, or last, meeting. Jackson has crafted something both thoughtful and quietly captivating that will likely be returned to again and again.