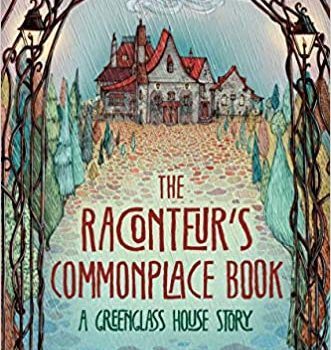 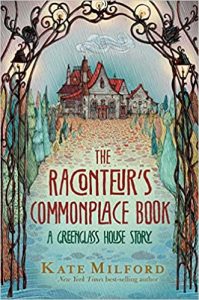 Kate Milford returns to the world of her Greenglass House novels with the be­guiling puzzle that is The Raconteur’s Commonplace Book. Set in a 19th-century-esque time period, the new title focuses on the 15 people waiting out an endless rain in the Blue Vein Tav­ern. The roads are flooded by the rising Skidwrack River and the rain shows no sign of letting up, making everyone increasingly nervous. To pass the time, and in particular capture the attention of the youngest traveler, Maisie, the group decides to exchange stories. What follows includes tales of haunted houses, ghost ships, peddlers engaged in dangerous bargains and more than one deal with the devil. As everyone takes a turn, they reveal more about themselves and just what might be at stake with the rising river. Layer by layer, Milford creates a compelling narrative that in the end takes the reader far afield from what initially seemed to be a trapped group whiling away the hours. By the time the final page is turned, it is clear that The Raconteur’s Commonplace Book is about nothing less than what it means to live with deep regret, and how far humans will go to assuage their own guilt.

The Raconteur’s Commonplace Book is mar­keted as middle grade with a prospective reader age range of eight to 12. While I agree that there are plenty of eight-year-olds who will dive deep into this book, and especially enjoy the various stories, which often include young protagonists, I think Clarion would be wise to consider this more of an all-ages read. The tavern’s inhabitants are almost all adults and present a wide range of backgrounds. The stories they choose to tell are specific to who they are and the conundrum at the book’s heart – the question of how all these stories come together – is a mystery that will likely beguile the most attentive of readers. I am sure that many of them will reach the end only to flip back to the first page and begin reading it all over again, this time with the intention of catching everything they missed.

The prevailing theme to be found here, though it is often buried quite deep, is that of deal making, specifically the kind of deals that are made with the devil. Milford pulls from some of her earlier books, dropping in a familiar character or two which will certainly make her fans happy, but it is unnecessary to have read all of her works to enjoy any of her individual books and this is particularly true of The Raconteur’s Commonplace Book, which carries a complexity and thoughtfulness all of its own. The sinister nature of the rain, which everyone senses is not going to stop, fits perfectly into Milford’s well established world where light and dark forces are often pitched in quietly significant battles. That subtle war is the hook she so effectively uses to draw her readers in – the challenge to see if protagonists will be smart enough to extricate themselves from tricky positions against nefarious forces. But it’s the thoughtfulness of her characters, even those who have made bad choices, that gives her books their glowing power.

Everyone Kate Milford writes about is achingly human, and that is especially true of the denizens of Blue Vein Tavern. These are not necessarily heroes (or villains) but they are most certainly compelling characters and possess a degree of wistfulness that is unusual in teen fiction. These people, regardless of age, race, or station, have lived lives that demand introspection. And while some of them possess a degree of magic and pow­er that is certainly fantastic, they are collectively so intriguing that readers will find it impossible to look away as their situation becomes more and more perilous. Intricately written, gorgeously crafted, and captivating from start to finish, The Raconteur’s Commonplace Book is the kind of title that remains in your heart and is certainly one of my favorite reads this year. 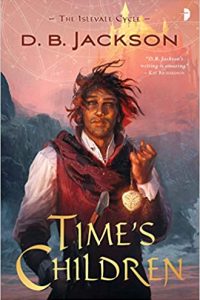