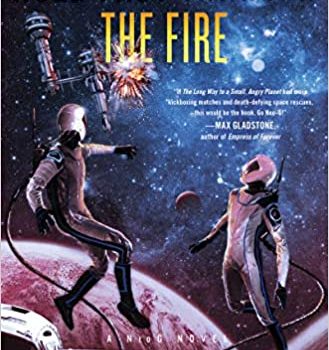 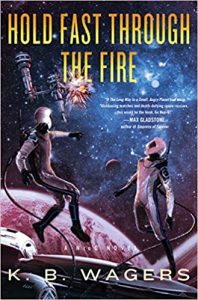 Hold Fast Through the Fire is the second NeoG novel by K.B. Wagers (acclaimed author of the Indranan War and the Farian War space opera trilogies). While it can be satisfying as a stand­alone, I believe it benefits from having read A Pale Light in the Black, Wagers’s first novel in this setting. It helps with small character details, and with appreciating how far some characters have come.

The Near Earth Orbital Guard (NeoG) is an organisation that performs much the same func­tion in space as Coast Guards do at sea. Their fleet of interceptor ships do customs patrol and search and rescue, in conjunction with the navy and other military and law enforcement branches of service. They also participate in the Boarding Games, a multi-service competitive extrava­ganza with a wide public following, involving competitions in cage fighting, fencing, piloting, navigation, and boarding operations. The crew of the Zuma’s Ghost are two-time Boarding Games champions, but personnel changes have arrived to shake up their winning chemistry. Alongside these changes, they’re entangled in an intelligence operation that’s aimed at a major threat – but their new commander’s approach may break the team’s trust and cohesion in a way that won’t be easy to recover from.

Nika Vagin served aboard Zuma’s Ghost before his stint with Intelligence. Now he’s back, and his orders have him keeping vital information from his curious, competent team. His XO, Lt. Max Carmichael, is very good at digging at in­consistencies and very protective of her people, and Nika’s attempts to keep her in the dark may screw up their relationship for good. They may also screw up his relationship with his adoptive sister Jenks, now promoted to the Zuma’s Ghost‘s Chief Petty Officer. Jenks is only just starting to trust other people and to let other people in. Her relationships with Senior Chief Luis Armstrong and Navy lieutenant Tivo Parsikov are only just settling down into something she can rely upon, and it’s unfortunate that both Luis and Tivo are in on the secret that Niko’s also keeping.

Spacer Chae Ho-ki is also newly aboard Zuma’s Ghost, serving with the NeoG as part of a plea deal that keeps them out of prison. They’re being manipulated and threatened by powerful – and casually murderous – people, with connections in high places, who want to keep the NeoG from interfering in their bottom line. NeoG Intelligence – and Nika – know about this, and are using Chae to try to get evidence to indict some of those pow­erful people, but Chae doesn’t know they know. The situation is primed to go sideways, especially when the crew of Zuma’s Ghost find themselves in the line of fire.

And that’s before someone commits an act of terroristic violence that kills numerous NeoG personnel, hoping to spark political divisions and agitation among far-flung (and commercially exploited) settlements into a shooting war. Trust is at a premium, but some of the Zuma’s Ghost crew are falling apart. Especially Jenks, for whom losing Luis, on top of discovering his breach of her trust, is a terrible blow.

Hold Fast Through the Fire is a darker book than A Pale Light in the Black. It’s deeply concerned with trust and relationships: the way they can be manipulated by bad actors, or even by well-meaning people who screw up and hurt the people they care about because they were liv­ing too much in their own heads. It’s concerned, too, with grief, with trauma, and with recovery and, for all its willingness to grapple with heavy themes, it’s a book that comes down on the side of optimism, of healing and triumph. That’s both satisfying and comforting.

Wagers brings their usual deft gift for action and pacing to this taut, tense, sometimes nail-biting novel. Exciting space adventure with real human consequences is a personal favourite of mine, and Wagers – with their inimitable flair – gives us a diverse cast of compelling and relatable people, in a story that has a heart, a sense of humour, and plenty of banter. Particularly notable, and particularly pleasing, is Wagers’s treatment of diverse gender experiences and a diversity of sexual orientations and orientations towards relationships: Hold Fast Through the Fire, like its predecessor, takes place in a world where bigotry regarding gender, relation­ships, and orientation is part of the past. It makes for a satisfying and rather reassuring reading experience. I can use more optimistic futures.

Hold Fast Through the Fire is an intense, ex­citing, and delightfully entertaining novel. I hope Wagers returns to this setting, and these characters, in the future, because I’d read many more books like this one.