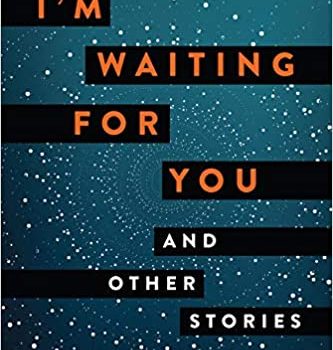 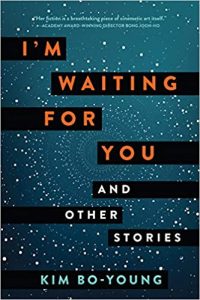 Between the films of Bong Joon-ho (The Host, Snowpiercer, Parasite) and Yeon Sang-ho (Train to Busan, Peninsula) and its various series on Netflix (Kingdom, Sweet Home, Uncanny Counter, etc.), South Korea has lately become a significant player in SF/F media, but South Korean fiction has so far enjoyed far less visibility. A good general introduc­tion was offered a couple of years ago in Readymade Bodhisattva: The Kaya Anthology of South Korean Science Fiction, edited by Sunyoung Park & Sang Joon Park (reviewed here in April 2019). One of the authors included was Kim Bo-Young, a leading SF writer whose “Between Zero and One” offered some striking observations about parenting, education, and time travel. Now her first two col­lections in English are appearing within weeks of each other: On the Origin of Species and Other Stories from Kaya Press (credited to Bo-Young Kim) and I’m Waiting for You and Other Stories from Harper Voyager (credited to Kim Bo-Young). While I’ve not yet seen the Kaya Press volume, there’s a good deal that’s impressive in I’m Waiting for You and Other Stories, even though it really consists of only two pairs of stories. “I’m Waiting for You” and “On My Way”, translated by Sophie Bowman, are wildly romantic SF, depicting both sides of a marital engagement that inadvertently stretches into centu­ries, while “The Prophet of Corruption” and “That One Life”, translated by Sung My, are posthumous eschatological fantasies drawn from Korean and Buddhist sources.

“I’m Waiting for You”, which Kim tells us was written as an engagement gift for a friend, is almost structured as a rom-com of missed connections, although its tone is increasingly grim. Cast in the form of 15 letters written by a prospective groom to his bride, its central conceit involves using relativistic time-shifts to coordinate a planned wedding: the bride has left for Alpha Centauri with her family and won’t return for several years, Earth time. To reduce his waiting time, the narrator takes advantage of a circumsolar voyage called the “Orbit of Waiting” – essentially a trip to nowhere, designed to jump forward in time – in order to meet her for the wed­ding. The idea of using space travel as time travel to keep an appointment is hardly new – it was a plot point to bring two lovers together as far back as Joe Haldeman’s The Forever War – and, not surpris­ingly, things begin to go wrong: her ship is delayed, he changes to another ship, then that one is delayed, and as a succession of missed connections takes us further and further into a bleak future, the story shifts tone from romance to elegy, with haunting images of a devastated Earth, centered around the landing port where they were supposed to meet (which eventu­ally disappears entirely) and the church where the wedding was planned. While the groom finds him­self increasingly isolated through the years – even spending years in a tiny one-person spaceship – the bride’s experience, detailed in her own 15 letters in “I’m On My Way”, is one of being surrounded by too many humans and AIs who can or will not understand her devotion. Together, the stories form not only a haunting if sentimental portrait of star-crossed love, but also a compelling vision of a decaying Earth and a sharp meditation on the hazards of both too much community and too much solitude.

“The Prophet of Corruption” and “That One Life”, which is largely an appendage to the earlier story, are less compelling dramatically, if more dense with what might be called eschatological world­building, or cosmology-building. Kim explains in a glossary – which might usefully regarded as part of the story – her idiosyncratic use of the term Prophet: “Any second-generation entity born from the division of the primordial universe is called a Prophet.”Each shape-shifting Prophet occupies their own Bardo between incarnations in the Lower Realm, which may include anything from ants and mayflies to humans. Each Bardo, we are told, “represented a ‘heaven’ for each religion.”The main conflict involves the Prophet Naban and a third-generation Prophet named Aman, who is Naban’s offspring and who wants the Prophets to use their powers to alleviate suffering in the Lower Realm, and perhaps to grant the Lower Realm greater autonomy. This rebellious attitude is what Naban views as corruption. While the stories are rich in sensual detail, the overall ef­fect is less one of a plotted tale than an emergent cosmology borrowing terminology from Buddhist and Chinese legend (Fuxi, Tushita, bardo) as well as from science and SF (spaceships, biopropellants, neural networks, entropy). If not quite a page-turner, it’s an impressive imaginative performance, sugges­tive of a William Blake-style visionary cosmogony, and perhaps it’s even more impressive on the part of the translator Sung Ryu. The book is rounded out by some very useful notes on the stories by the author and translators, the aforementioned glossary for “The Prophet of Corruption”, and some utterly charming reminiscences from the married couple who originally commissioned “I’m Waiting for You” and “I’m On My Way”. 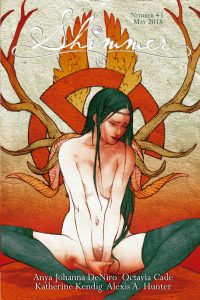 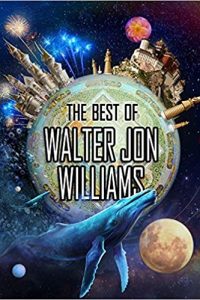