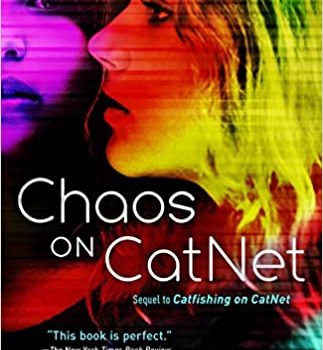 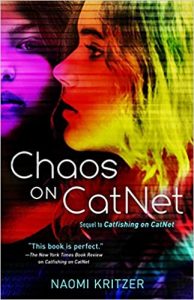 Naomi Kritzer’s Chaos on Catnet is a direct sequel to her Lodestar Award winner Catfishing on Catnet, and it does exactly what a sequel should do: expand the stakes, introduce a few important new characters, reveal some secrets and puzzles left over from the first novel, and deepen the tone a bit. The trick is to manage all this without retreading familiar plot points or losing the authentically breezy YA tone of the first novel. Catfishing on Catnet managed to keep that almost sunny tone intact while developing some pretty dark plotlines: the teenage Steph and her computer-genius mom moved from town to town in an effort to avoid being tracked down by her abusive and even homicidal father, never settling anywhere for long and never giving Steph a chance to develop friendships. Her social life took place almost entirely with a group of mostly geeky friends on a website called Catnet, which is actually managed by one of those friends, who (we learn) turns out to be a power­ful AI calling itself CheshireCat, and who basically just wants to look at cat pictures and help out her new friends. Chaos on Catnet begins with Steph’s father safely behind bars, and Steph and her mom finally settling into a more stable life in Minneapolis. But while the first novel featured a really scary father, this one features not one but two really scary moth­ers, a mad scientist programmer, a whole passel of doomsday cultists, and a rogue AI which seems to waffle between just wanting to look at flower pictures and trying to turn itself into Skynet. Fortunately, it also introduces a kick-ass grandma.

We could see that rogue AI coming at the end of Catfishing on Catnet, when CheshireCat received an anonymous and untraceable message saying “I know who and what you are. Do you know me?” That novel divided its first-person narratives between Steph and CheshireCat, interspersed with occasional discus­sions among Steph’s “clowder” on Catnet. Chaos introduces a third narrator, Nell, a new schoolmate of Steph’s whose cult-member mother has disappeared and who now finds herself living in her long-alienated father’s polyamorous household, which includes his wife, her girlfriend, and his girlfriend. This is obvi­ously appalling to Nell’s more or less fundamentalist Christianity, and sets up one of the challenges Kritzer sets for herself: creating a credible voice for the con­flicted Nell, who shares her mother’s religiosity but has a girlfriend of her own, Glenys. She’s not nearly as savvy or quick-witted as Steph and her Clowder friends (though she’s sarcastic enough to refer to the adult women in the home as Thing One and Thing Two). When Glenys disappears, Nell needs to learn some degree of trust for people she has been trained to view as evil.

But there is more to the cult than even its creepy belief in deprogramming gays, and it may involve that rogue AI. A Pokémon GO-style website called the Mischief Elves sends its members on odd assign­ments gathering things, while the social media site used by the cult seems to be organizing something far more ominous and more violent, if a bit more far-fetched. This leads to Kritzer’s second major chal­lenge, and one she openly acknowledges in a brief afterword: setting a near-future novel involving urban violence and terrorism in a changing, post-George Floyd Minneapolis, a city described in such convinc­ing detail that is almost seems like another character facing hard life choices. The choices Kritzer makes, like those of her characters, are essentially optimistic, and it’s that resilient optimism – ranging from the possibilities of law enforcement reform to the power of friendship, even to the awesome potential of free-will AIs – that makes Chaos on Catnet as appealing and empowering as its predecessor. 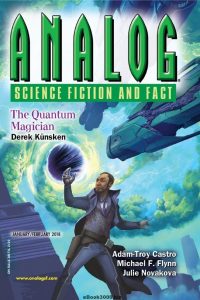