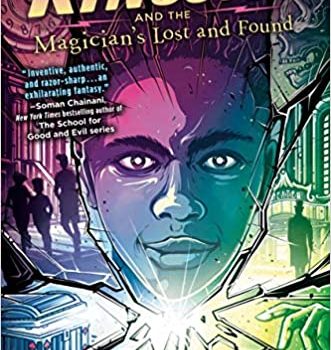 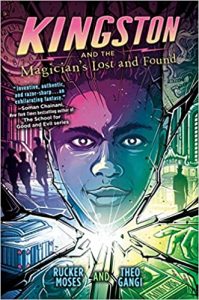 The writing collaboration of Rucker Moses (pen name of Craig S. Phillips & Harold Hayes Jr.) and Theo Gangi has created Kingston and the Magician’s Lost and Found, an adventure novel of breakneck pacing and major magical concerns. It begins with the return, after four years, of Kingston and his mother to the Brooklyn neighborhood where he grew up. They have come back to help Kingston’s two uncles save the family brownstone by staving off foreclosure. Kingston is immediately drawn to the Mercury Theater, the site of his father’s disappearance during a magic act. Three people leaped into a mirror that night and none of them returned. Kingston’s family knows this is because of dangerous magic but more than anyone else, he yearns for an answer to what went wrong. In Brooklyn, along with his cousin and an old friend, he immediately finds himself in the midst of a dangerous mystery. His father – or someone far more nefarious – has left clues for Kingston to follow. But no one knows what lies at the end of this trail or just how far he should go to find the truth.

This is a story where setting is everything. A map decorates the early pages and it is finding that map, and the places on it, that propels the narrative. Brooklyn is a very big character here, from the local pizza, to the brownstones, street art, and, finally, the Mercury Theater. Kingston, Veronica (“V”), and “Too Tall” Eddie, run from one destination to another as they try to find a way to bring Kingston’s father back. Along the way they pick up some enemies, first some local kids who seem oddly transfixed by Kingston’s quest, and later a woman of terrifying origins. Kingston reaches out to his magic-loving uncles and finds some new friends who are enmeshed in the mys­tery for their own reasons. In the end he loses a part of himself, jumps into a mural, wanders a ghost cemetery and waits for a clock to strike 13. Through it all, the teens stay together and don’t let up until the very exciting finale.

Kingston and the Magician’s Lost and Found sacrifices a bit of nuance to keep the plot moving at such a rapid clip. Hints are dropped about V’s relationship with her father, but for all that he promises to the narrative, he and Kingston’s other uncle remain largely flat char­acters who exist primarily to direct the kids in one direction or another. It is also disappointing that for all the physical movement, much of the mystery unfolds by Kingston being told things. Good guys tell him things and bad guys tell him things. V and Eddie follow along behind as he learns all these things, but there is no strong group dynamic, à la Stranger Things, of kids working together here, and their contributions overall are relatively small, which is a shame.

Reluctant readers will likely shrug their shoul­ders at my complaints however, and just enjoy the rush. For them, the book will be a boon and we shouldn’t undercut that positive impact. Moses and Gangi have found a formula to keep the pages turning and Kingston, most definitely, is a hero to stick with until the end. If this group returns for a second installment, I just hope everyone else gets a chance to shine as well.