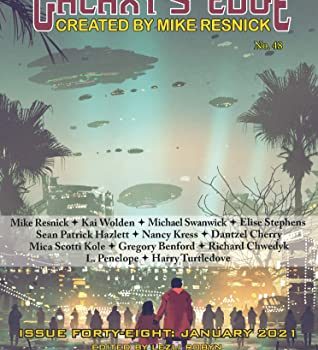 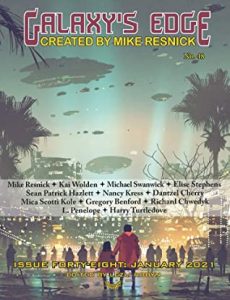 Galaxy’s Edge for January has a nice story from Elise Stephens, “Drowned Prison“. A lumanar named Hallis comes to Kardag Prison, where the dangerous “Banner Lords” are held. These are experts in a sort of painting called lumastration, in which the painter magically infuses their art with emotions, and the Banner Lords were used in war, so their paintings would make those who see them insane – and also eventually their creators. Hallis is a trainer of lumanars, and so some of these Ban­ner Lords were his pupils, and he wishes to argue for more humane treatment of them. Instead he must investigate a serious of unexplained deaths among the imprisoned Banner Lords. Again, the mystery and its solution aren’t that interesting, but the magical concepts, the moral questions raised, and the interaction between Hallis and the prison Warden, a failed student of his, make it enjoyable.

I tried a magazine new to me, Fusion Fragment. The January issue is its fourth. The visual presentation is arresting and ambitious, though I don’t think it really works in this issue – all black and white with bits of red, and the print is white on a black background, not my favorite. However, it looks like each issue is designed differently, and I will say that at least the covers of the three previous issues look very good. In a way, I thought the fiction this issue was similar: arresting and ambitious but not really working – a bit too over the top. Overall a disappointing outing, but I think there’s potential. The most enjoyable story was Maria Dong‘s “The Ten Thousand Lives of Luciana Kim“, in which the title character, who had wanted to commit suicide, instead finds herself in some sort of virtual gameworld, replaying vari­ous different scenarios again and again, dying again and again.

I’ll also recommend a nice story collection, The OK End of Funny Town by Mark Polanzak. This includes 19 stories, three of them new to this book, many of them in a fabulist mode, though none of the reprints come from genre sources. Most of the stories seem to be set in a slightly altered present, somewhere in the Northeast of the US (seemingly mostly upstate New York or the Boston area), and they are told in a similar whimsical and sometimes rather po-faced voice. (George Saunders might come to mind.) Some have an extrapolative side, often a bit satirical: “Our New Community School” suggests some stranger and stranger educational innovations, such as “New Practical” adult education courses like “Staring at Walls and Thinking While Seated.” “A Proper Hunger” posits various restaurants to bring patrons “closer” to their food sources, eventually leading to “kill-and-eat” restaurants, where you hunt your food before eating.

The stories are sometimes satirical, sometimes gnomic, but I think I liked the more personal ones that make us feel for the characters. “Test” is in the form of a written test, but the questions veer to the personal, about the narrator and his ex-girlfriend… and the “test” itself becomes a character – and, all effectively portrays the main character’s loneliness. And my favorite of the original stories, “How You Wish“, portrays the main character’s relationship with his wife via various different wishes, in things like birthday cakes and shooting stars, and in the end it’s hauntingly moving. 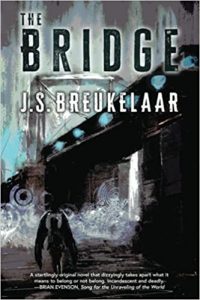