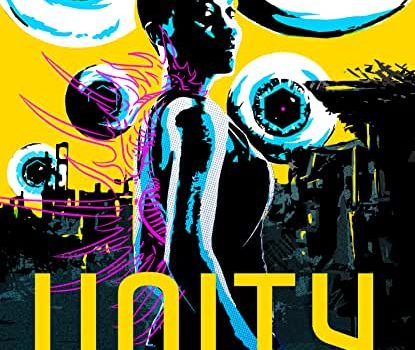 Danae is not only herself. She is concealing a connection to a grieving collective inside of her body. But while she labors as a tech servant in the dangerous underwater enclave of Bloom City, her fractured self cannot mend. In a desperate escape, Danae and her lover Naoto hire the enigmatic ex-mercenary Alexei to guide them out of the imploding city.

But for Danae to reunify, the three new fugitives will have to flee across the otherworldly beauty of the post-apocalyptic Southwest. Meanwhile, Danae’s warlord enemy, the Duke, and a strange new foe, the Borrower, already seek them at any price.

Elly Bangs’s debut novel Unity is a rare book, a passionate, complex, profoundly philosophical novel of apocalypse. Bangs has crafted a detailed story that leaps from the page, a narrative in which every character, every action, every sentence achieves integration into the larger purpose and achievement. It’s not a terribly approachable book, but it is a deeply rewarding one, a fully realized journey from despair to hope.

Indian fantasy novel, second in the Burnt Empire series based on the Mahabharata, featuring Aqreen and Krushita, a mother and daughter on a quest to protect the innocent and bring down tyrants.

Fantasy novel, the third and final in the Chronicles of Amicae trilogy in which a bomb squad defuses the magical weapons of a long forgotten war.

Young-adult post-apocalyptic Western SF novel. Delta sets out to rescue her family from a ruthless dictator in the Wastes.

Sequel to Finna, book two in the LitenVerse series. Derek lives for work, spending 18 hours a day there, but when he takes a sick day off, his loyalty is called into question. He is assigned to a special inventory shift to find defective products, assisted by four replicas of Derek himself.

SF novel, the third in the Web Shifter’s Library series begun in Search Image, returns to the adventures of Esen, a shapeshifting alien who must navigate the perils of a hostile universe.

SF space-opera novel. The Divide at the edge of the universe is collapsing, and only the Sentinels, dregs of the military, are there to save existence.

Far-future SF novel. A woman pilot stranded on a world encounters a being from a species damaged by humans centuries before.

Graphic novel adaptation of the near-future SF novel by Stephen King & Owen King. In a future so real and near it might be now, something happens when women go to sleep: they become shrouded in a cocoon-like gauze. If they are awakened, if the gauze wrapping their bodies is disturbed or violated, the women become feral and spectacularly violent. And while they sleep they go to another place, a better place, where harmony prevails and conflict is rare. One woman, the mysterious “Eve Black,” is immune to the blessing or curse of the sleeping disease. Is Eve a medical anomaly to be studied? Or is she a demon who must be slain?

Supernatural mystery novel drawing on Choctaw mythology and contemporary Native American life. Detective Monique Blue Hawk investigates murder at a children’s museum, a crime linked to a family of shape-shifting witches. This is the 88th book in the press’ Sun Tracks: An American Indian Literary series.

Collection of 12 stories of journeys through space and time. Silverberg provides both a general introduction and story introductions.

Skovron, Jon: The Queen of Izmoroz

Epic fantasy novel, the second book in the Goddess War series, inspired by Russian legends. Sonya has brought a foreign army to free her country from imperial rule, but her allies may have other goals.

Book 19 in the Black Dagger Brotherhood series, featuring Sahvage, a powerful MMA fighter with a buried secret that can change the world of Caldwell forever.

Sitting down to write this article was a debate between expressing an observation and my willingness to be metaphorically punched in the nose if I didn’t express myself well enough. This is because diversity is a hot topic and there are vocal opinions on both sides. There are two looming concepts that I’m looking at: “How do you make an anthology that actually sells?” and “Making sure that the anthology