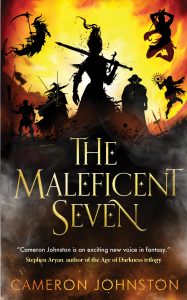 I’d never heard of Cameron Johnston before I received a review copy of his The Maleficent Seven, due out from Angry Robot. Its pitch is “fantasy Magnificent Seven, but everyone’s a villain,” and while I don’t normally enjoy a book that’s all about bad people doing bad things, this one works surprisingly well.

For one thing, it has a sense of humour.

Forty years ago, dread demonologist Black Herren, at the head of a mighty army, was on the verge of conquering the entire continent. Then, abruptly, she decided that her priorities had been a little skewed. Abandoning her army and her (dread, terrible, not very good at co-operating without fear of her) captains to squabble amongst themselves, she retired to a small village – where she’s raised her child and grandchildren and spun her long-term plots ever since. But now a new army, led by the divinely touched Falcon Prince and full of zealots, is conquering the land, eradi­cating all worship of other gods, and Black Her­ren’s village of Tarnbrooke is in its line of march. What’s an elderly demonologist to do but get the dreadful band back together? And she has some information the most terrible of her old captains, the necromancer Maeven, wants. At least for now.

Maeven wants a lot of things. Not least of which is to fill up her little black necromantic knife (every necromancer’s favourite accessory) with powerful souls, in order to reclaim the one thing she actually cares about – her sister, Grace – from her much-hated brother Amadden. Some of Black Herren’s old captains might do very well as fuel. But she has to recruit them first, starting with the old-school oaths-and-honour-and-vicious-murder vampire lord Lorimer Felle, and going on to in­clude the ex-war-god Tiarnach – committer and survivor of genocide; the brutal orc warrior, now chieftain, Amogg Hadakk (a charismatic figure from a people whose customs are violent and alien); Verena Awildan, family woman and ruth­less pirate queen; and alchemist Jerak Hyden, an egotistical horror of a scientist who’d burn the world if he thought he could make cool shit with the ashes, or maybe just to measure how long it would take. Also in the cast: doomed lordling Lau­rant Daryn, who marches with the Lucent Empire and finds his lack of belief in their cause replaced with unnatural fervour, and Penny, a Tarnbrooke villager who unwittingly impresses Amogg with her courage and gets taken under the orc’s wing for the battles to come.

And oh, there are battles. First the battles to recruit the whole band, and then the battle for Tarnbrooke, and finally Black Herren’s long-awaited battle for supremacy, but if I tell you who that battle’s with, it’ll ruin the surprise. Coarse, crude, bloody, brutal, and utterly over-the-top: The Maleficent Seven reminds me of nothing so much as one of those horror films that leans so hard into the blood and guts and banter that it stops being horrifying and becomes comic. It helps that all of these horrible people are humanised: they have human connections and human cares, even if they’re largely selfish (Jerak Hyden being the monstrous exception). It helps, too, that The Maleficent Seven has a sense of humour, a go-big-or-go-home delight in playing with entertaining villains and doomed last stands.

This is no one’s redemption, but it is an enter­taining ride. 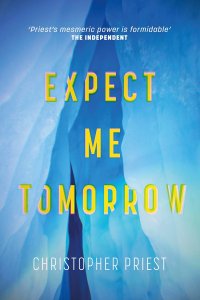