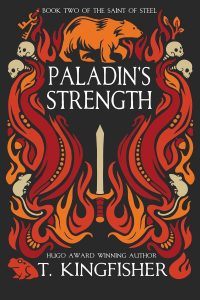 Paladin’s Strength is another novel with a vivid and engaging voice. A sequel of sorts to Paladin’s Grace, T. Kingfisher’s latest quirky romantic fantasy sees Istvhan, one of Paladin’s Grace‘s minor characters, and Clara, a lay sister from a fairly unique religious order, develop a mutual attraction while having some fairly uncomfortable adventures. It’s a perfect antidote for the pandemic blues.

Istvhan is a former berserker paladin of a now-dead god, the Saint of Steel. Currently employed by the Temple of the White Rat, he and fellow ex-paladin Galen are escorting a wagon east for the temple. He has also been tasked to look for evidence of the clay-headed men, magical creations who committed many murders in the city of Archenhold – they plant their own heads on headless human bodies, which, alas, do not stop rotting and shortly become useless to them, so they are quite the regular serial killers.

Clara used to be a traveling merchant for her convent, the Sisters of Saint Ursa. But within the last month her convent was burned to the ground and she and her sisters were captured by raiders. Clara fell ill and was left for dead by their captors. She encounters Istvhan as part of an unfortunate cultural misunderstanding with her current hosts, the Arral, and as Istvhan is a man raised to have a proper and appropriate respect for nuns – even lay sisters – it falls out for the best for them to travel together. This allows for the development of a mutual and fairly intense interaction between them: an attraction significantly complicated both by bounty hunters willing to capture other Sisters of Saint Ursa, and by the revelation that Clara can turn into a bear. So can her sisters, and this is why they were hunted. (An alternate title for this novel would be Were-Bear Nun and Berserker Paladin Fight Crime, Fall in Love.)

Personal misunderstandings – some of them related to Istvhan seeing Clara bite a man’s head entirely off – abound. But Istvhan doesn’t let a little thing like violence put him off what he conceives of as his duty, so when bounty hunters attack, he separates from the rest of the party escorting the wagon to accompany Clara cross-country to Morstone. Their solo journey, and the encounters along the way, brings them closer together, even as Clara worries that Istvhan will be put off by her bear-ness and Istvhan worries that he might offend a woman who can turn into a bear and bite his head off. 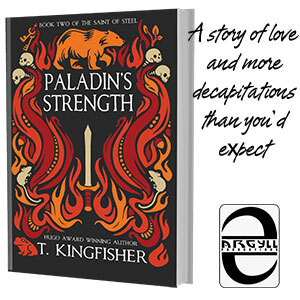 Morstone is a trading entrepôt ruled by some very bad people. The local Temple of the White Rat is rather overwhelmed by the extent of its social problems because people turn to that very practical temple for help. But Istvhan and Clara learn that Clara’s were-bear sisters have been captured in order to force them to fight in Morstone’s gladiatorial arena. The White Rat’s temple staff can offer them only organisational assistance but no direct aid, and the plan for breaking the sisters out relies on any number of things going well. Fortunately or unfortunately, Istvhan also has a lead on the origins of the clay-headed men. Surely nothing too terrible can possibly go wrong!

Spoilers: things go wrong. Things go very wrong, leading to a show-down with clay-headed men in the middle of a gladiatorial arena, death, destruction, and a watery escape.

Paladin’s Strength is an engaging sword-and-sorcery sort of fantasy romantic adventure. Fans of previous novels set in the same world (like Swordheart) will appreciate recurring characters such as Brindle the job-gnole, and Kingfisher’s energetic and atmospherically weird approach to world-building remains strikingly appealing. It’s interesting to see the edges of this world grow more filled-in over the course of several separate works: the ways in which Kingfisher brings together the utterly weird and the pragmatically mundane are reminiscent of Terry Pratchett, although Kingfisher is – by my lights – a more naturalistic writer, rather less devoted to poking fun in the cause of social commentary. Clara and Istvhan, too, are engaging, both separately and as a couple, though the narrative does lag a little in its pacing in their cross-country adventures. Kingfisher is very good at complex, well-meaning people, and that shines through.

A very excellent adventure, all things considered. I would be very happy to read many more stories set in this peculiar continuity. 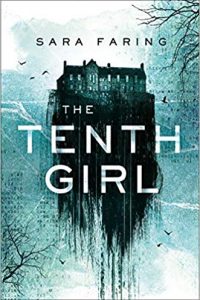