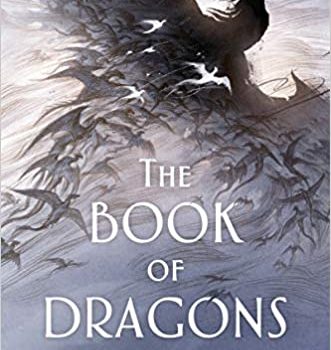 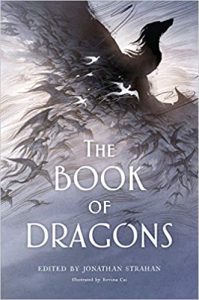 F&SF opens the year with a remarkable no­vella from John Kessel. “The Dark Side” concerns Leon Czolgosz, the murderer of President McKinley. The story runs on two tracks, one detailing Czolgosz’s actions leading up to his crime, plus some backstory, and also the aftermath as he is tried and executed. The other track concerns a fantastic trip to the Moon, where Czolgosz encounters an oppressed group of humans and joins a plot to assassinate the Lunarian king…. At first it seems like the Lunar story will be a sort of allegorical representation of Czolgosz’s earthly struggles, but things are more complex and politically ambiguous than that. This is an odd, unexpectedly entertaining, and thought-provoking story.

Karen Joy Fowler contributes a lovely story, “The Piper“, in which a young man living in a comfortable village joins the army with his fellows when the King’s men come calling and soon comes to regret it. Seems simple enough, but the story has a mysterious dark undercurrent, and is told just beautifully. Robert Reed is also in strong form with “Integral Nothings“, about the sudden arrival of “Blessings” – tiny changes that slowly but inexorably improve the situation on Earth. It becomes clear that these must be caused by some external power: what takes longer to realize is that they come at a cost, or, perhaps, what takes longer to realize is what change to Earth might in some eyes benefit the planet the most. It’s a coldly scary piece.

The standout story in Uncanny‘s January-February issue is “Beyond the Doll Forest” by Marissa Lingen. The narrator is a governess of sorts for a young girl, Karin. Karin has, not a doll house, but a miniature forest… and, well, you do know what’s happening, and where her mysteriously missing older sisters are, and what’s up when Karin confesses her fear of an evil sorcerer. Like many fairy tales, we know what’s going to happen, but the telling of the story is enchanting.

Jonathan Strahan’s The Book of Dragons is his second anthology of dragon stories: let’s admit it, dragons are very cool and a continuing excellent source of story. There are any number of lovely stories here. I’ll particularly mention “Habitat” by K.J. Parker, in which a youngest son who has by sheer luck managed to kill a dragon is induced by the local prince to try to capture one for him. It goes without saying that that’s a dangerous and stupid thing to want, but the narrator really doesn’t have a choice in the matter. The story tells of his first kill, of a dragon that had killed his brother, and then of his plan to capture a dragon for the Prince. Parker buries a very neat sting in the tail of the tale, as it were.

Kate Elliott‘s “The Long Walk” concerns Asvi, an older woman whose husband has just died. Women have no autonomy in her society, and the older tradition was that a wife must die when her husband dies. Nowadays they instead send them on the Long Walk, to where the dragons are, as an of­fering to thank the dragons for keeping the demons from human lands. Asvi’s family can buy her an exemption, but she comes to realize she will never have a true place with her son and his wife… and she choose to take the Long Walk. All this is quite wonderful, and very sharp about gender roles and class. I don’t think the somewhat-too-predictable conclusion works quite as well as the opening sec­tion, but it remains a very worthwhile story.

Dragons are fantasy creatures, of course, but there’s a long tradition of giving them a science-fictional rationale, and I liked Ann Leckie & Rachel Swirsky‘s version of this, “We Continue“, about a boy who was adopted by a dragon when she found him sick and abandoned. But now the dragon – and her whole hive – is dying, and by happenstance she finds a human to be his new companion…. The cen­tral part of the story, the best part, subtly and cleverly sketches the dragon life cycle and social structure, while letting us in as well on where we are and why the humans are there.

Two more stories are the very best. “Camou­flage“, by Patricia A. McKillip, features a Magical Arts student taking his final exam and ending up mysteriously in a completely different place and time, where he encounters two women and sees their dragons, who can rarely be seen, because of their magical camouflage. He has a role here too – which may have something to do with his exam. I’m not telling where and when this test occurs, because it’s part of the fun – but the mix here of magic, time travel, war, and dragons is delicious. Time travel is an essential part of “Dragon Slayer” by Michael Swanwick, probably the most sheerly fun piece in the book. Olav is a fighter and a merchant and pirate and whatever else he needs to be, and he wanders south after finding his wife coupling with a demon, and then killing them. On the way he joins a caravan, ending up adopting the only surviving boy after brigands kill them all. The boy isn’t really a boy, in the way of such stories, but Olav still teaches Nahala to fight, and in the new city they come to he proposes to return to thieving. That’s a bad idea, though, as a time-traveling wizard tells them… and soon enough the wizard has a job for Olav, which is good for a while, but which gets dangerous when the job involves killing a dragon – a dragon which has been giving Olav nightmares. The resolution is clever and twisty, involving nice use of the wizard’s time traveling ability, and nice use of the dragon’s identity, and fun fates for Olav and Nahala and the wizard and the wizard’s apprentice…. Just great fun. 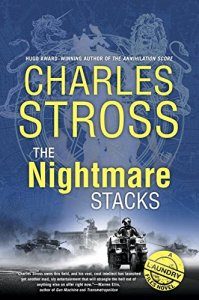 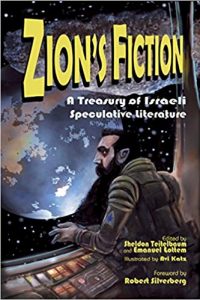