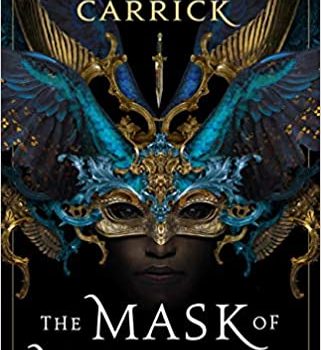 M.A. Carrick, The Mask of Mirrors (Orbit 1/21) Marie Brennan & Alyc Helms join together under the Carrick pen name to bring us this first in the Rook & Rose trilogy. Con artist Ren comes to Nadezra, the City of Dreams, and gets swept up in its aristocratic glamor and nightmare magic for a captivating fantasy adventure.

Kristin Cashore, Winterkeep (Dial 1/21) Cashore returns to the world of her Mythopoeic Award winning Graceling with another companion novel, this one set in a kingdom full of airships and telepathic foxes. A wonderful addition to an extremely popular YA series.

Olga Grushin, The Charmed Wife (Putnam 1/21) Thirteen years after marrying Prince Charm­ing (and tired of it), Cinderella seeks out a witch to solve her problems. But instead of asking for a love potion to recapture the old fairytale romance, Cinderella wishes for a darker ending to the story. A twisted and inventive version of the time-old tradition, perfect for modern audiences.

Dominique Hecq & Eugen Bacon, Speculate (Meerkat 1/21) A collaborative collection of 58 pieces (with ten reprints) of microlit, a hybrid of speculative poetry and flash fiction. Each piece is in two parts, with one author offering the poem and the other a response, in a stunning exploration of language.

Greta Kelly, The Frozen Crown (Harper Voyager US 1/21) Kicking off the Warrior Witch duology is the story of Askia, a princess raised in army camps as her people struggle against a mad em­peror’s invasion. Wending her way through mortal danger and court intrigue, she must also keep her powerful magical abilities secret while fighting to free her land.

Caitlín R. Kiernan, Comes a Pale Rider (Subter­ranean 11/20) This collection returns to the world of one of Kiernan’s most compelling characters: the albino monster hunter Dancy Flammarion, in­troduced in the 2001 novel Threshold before going on to feature in numerous stories (some collected in Alabaster in 2006) and a spin-off comic series from Dark Horse. She appears here in five stories, two original, with illustrations by Ted Naifeh.

R.A. Lafferty, The Best of R.A. Lafferty (Tor Essentials 1/21) This is the first US edition of a retrospective collection (published in 2019 by Gollancz in the UK) by the famously inventive and hard-to-categorize author, edited by Locus‘s own Jonathan Strahan. In addition to 22 mind-bending stories, there are introductions and afterwords by luminaries including Terry Bisson, Samuel R. Delany, Harlan Ellison, Neil Gaiman, Nancy Kress, Cat Rambo, John Scalzi, Jeff VanderMeer, Robert Silverberg, Connie Willis, and more.

Stina Leicht, Persephone Station (Saga 1/21) This Western-tinged SF novel (think “a feminist Mag­nificent Seven“) should delight fans of space opera adventure: when remote Persephone Station is targeted by a remorseless intergalactic corporation that wants to exploit the planet, local nonbinary crime boss Rosie Ashmore and her colorful gang of assassins, mercenaries, and ne’er-do-wells step up to stop the bad guys.

Nick Mamatas, The Planetbreaker’s Son (PM Press 1/21) The newest installment in the long-run­ning PM Press “Outspoken Authors” series of slim collections showcases the Stoker Award-winning author and editor with two stories (including the original title novella), plus an essay about his days writing term papers for money, and the traditional unusual interview conducted by Terry Bisson.

Eden Royce, Root Magic (Walden Pond 1/21) This debut middle-grade dark fantasy novel has plenty of appeal for adults, as it follows Gullah-Geechee children in 1960s South Carolina who learn magi­cal rootwork and use it to fight evil – of both the supernatural kind, and the all-too-human variety. “An entrancing story of family love, legacy, and strength; of finding oneself; and preserving a con­nection to the past.” [Paula Guran]

Nnedi Okorafor, Remote Control (Tordotcom 1/21) The ever innovative author’s latest novella mingles SF, fantasy, and coming-of-age elements in the story of a girl who encounters an alien seed that imbues her with strange powers and transforms her into the adopted daughter of Death. “Easy to read, emotionally gritty, and wildly imaginative… a great addition to her already stunning oeuvre.” [Gabino Iglesias]

July 5, 2012 admin Comments Off on New and Notable Books, July

The Festival That Did: A Report from Celsius 232 by Ian McDonald

In July 2020 there was an SF/F festival. Live, not virtual. It ran from July 14-19, with inter­national guests and visitors, editors, artists, film-makers, translators, and fans. I’ve just come back from it, and I shall explain. Celsius 232 is a festival in Avilés, in Asturias, in Northern Spain. It has run for nine years, over which it’s become a major Spanish festival, with the ability to attract international guests