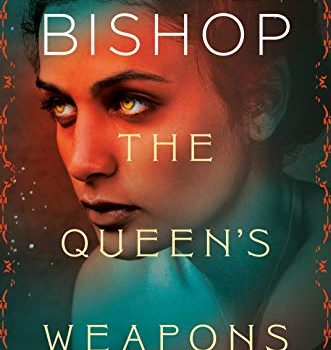 Fantasy novel, book eleven in the Black Jewels series. Author has stated that this is the end of the series for now.

Tie-in novel featuring the Marvel Comics character, Dr. Michael Morbius, who cursed himself with an insatiable thirst for human blood after trying to cure his blood disorder.

Standalone fantasy novel, in an new setting. A group of former heroes have trouble when one of them turns to dark magic to resurrect her husband.

Sequel to The Inconvenient God. Fantasy novella about a woman who “decommisions” old gods, investigating whether one of her clients has become active again, interfering with a seaside development, in a setting inspired by Southeast Asia.

Victorian fantasy novel, sequel to The Paper Magician, second book in the Spellbreaker series. In 1895 England, a young spellbreaker investigates a series of magical murders.

Fantasy novel. A young woman born with two hearts, considered by her people a striga—a dangerous demon—finds her life threatened and explores her true nature.

Young-adult SF novel. Nate is a runaway GEM, a genetically engineered medical surrogate created as a cure for the elite from the deadly lung rot, but he needs illegal medicine to live. A first novel.

Urban fantasy, the second book in the Blood & Bone series. An ex-con biker and a Texas cowboy are conscripted to fight demons posing as mythic and historical characters, as part of the coming apocalypse.

Military SF novel. A military journalist is ordered to impersonate his commander in secret peace talks as on a remote moon.

Slatter, A.G.: All the Murmuring Bones

Dark gothic fairy tale. Long ago the O’Malley family struck a deal with the mer: safety for their ships in return for a child of each generation. But after years of decline, the family has been unable to keep their side of the bargain.

Stewart, Andrew Kelly: We Shall Sing a Song into the Deep

Post-apocalyptic SF novella, about a girl disguised as a boy, part of a religious order that maintains an aging nuclear sub to trigger the Second Coming when the time is right.

YA Fantasy novel, debut. An exiled witch has been cursed with the inability to love, and can only regain that emotion by stealing it from others.

A female biker gang in space rescues a gay prince from an alien planet.

Anthology of eight fantasy stories (one a novel excerpt) and “reportage” from around the world, looking at geological time, climate change, and myths; all the pieces are in translation. Authors include Bakhtiyar Ali, Erika Kobayashi, and Michèle Rakotoson; translated by various translators.

Elizabeth Molly Tanzer was born October 29, 1981 in Marietta GA. When she was 12, she moved to West Palm Beach FL and lived there until her mid-twenties. She attended Rollins College in Winter Park FL and graduated with a bachelors in art history. She spent a year as a social worker, then went to Florida State University for a Master’s in humanities, with a focus on 18th-century literature. Afterward,