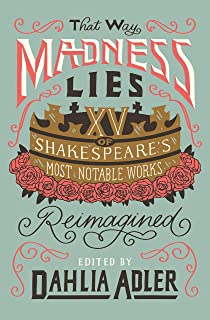 Young-adult original anthology with 15 retellings of some of Shakespeare’s most noted works, including some fantastic elements. Authors include Melissa Bashardoust, Anna-Marie McLemore, Tochi Onyebuchi, Mark Oshiro.

Urban fantasy novel, sixth in the bestselling Alpha and Omega series. In the wilds of Northern California, mated werewolves Charles Cornick and Anna Latham must discover what could make an entire community disappear.

Thriller with speculative elements, 18th in the NUMA Files series. A decades-old Nazi conspiracy is uncovered in Antarctica, including strange fast-growing man-made ice that could cause a new ice age.

Darrien and Onalin lead a team of commandos, searching for some way to stop the swiftly-approaching Namadi fire ships from wiping out five different worlds.

Young-adult fantasy novel based on the Brothers Grimm story “The Seven Ravens”. Robyn and his brothers are all cursed and turned into ravens, with their estranged sister their only hope of becoming human again.

A secret city run by a monstrous figure offers anyone a chance at a new life, with a guaranteed home and job, but they can never leave. Then one day, after tasting a new orange-flavored soda with strange properties, one resident awakens to the prison he’s living in. First in a series.

Young-adult North African-inspired epic fantasy. Final book in the duology and sequel to A River of Royal Blood. Queen Eva has to make peace with her sister to avoid a rebellion.

FBI Agent Dominic Wood tracks down the father he never knew, only to find the man believes he’s a werewolf.

Months after Inara leaves Serenity, Mal and the crew finally learn the reason for her sudden departure: she is dying of a terminal illness. The crew goes in search of a potential cure, but the man who developed the only known treatment has been incarcerated on a notorious prison planet.

Young-adult horror novel/ghost story. Sophia goes to Bitter Rock, the island where her mother disappeared. And where 31 people disappeared a generation earlier.

Young-adult fantasy novel, a “magical realism reimagining of ‘The Snow Queen'”. Graciela and a boy she barely knows are both assaulted at a party, leaving strange magical aftershocks in the neighborhood.

In Vancouver, two women discover they both can feel emotions that people leave behind on objects, but their efforts to develop the gift leads to danger.

Rowland, Rebecca, ed.: The Half that You See

Silleck, Sean: The End of Cake

After the apocalypse, a baker named Pete stands between the return of civilization and the end of humanity. Debut novel.

Near-future science fiction novel about two sisters on an island engineered out of the Great Pacific Garbage Patch.

Fantasy novel set in a world where markings on women’s bodies are used to predict the future. A first novel.

Omnibus of Blood Angel stories, includes the novels Flesh Tearers, Death of Integrity, and Lemartes, as well as two novellas and a number of short stories.

Series of essays by the best selling author of over 120 short stories, and 50 novels, drawn from various presentations in his decades-long career.

A woman ferries passengers around Washington DC in her haunted car while her estranged ten-year-old great-nephew has conversations with a mysterious man next to the river. 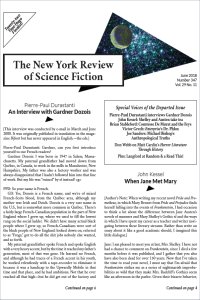 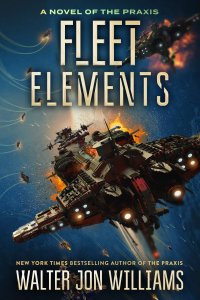 Kit Reed was born in San Diego CA and earned a BA from the College of Notre Dame of Maryland. In the ’50s she worked as a reporter for the St. Petersburg (Florida) Times and in Connecticut, for the New Haven Register, where she was twice named New England Newspaperwoman of the Year in 1958 and ’59. In 1974 she became an adjunct at Wesleyan University, where she ran fiction