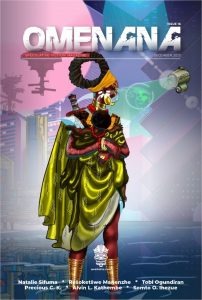 Speaking of speculative fiction from Africa, Omenana‘s 16th issue dropped in December. This one is full of tales of hauntings and other spooky happenings. A very confused ghost nar­rates “A Magician” by Rešoketšwe Manenzhe. In “Drummer Boy in a World of Wise Men” by Tobi Ogundirun, a young boy abandoned by his drummer father knows something is wrong when two strange men show up looking for his talking drum. The boy has drumming talent of his own, and he’ll need all of it to stand up against the forces that his father also fought. In “Silhouettes of Souls” by Precious C.K. a young woman signs on to help a scientific expedition studying the lo­cal lake. There’s an island there where unmarried pregnant women were taken and left to die; local legend says one of those women caused the waters to rise up and poison the lover who abandoned her. The scientists think that disturbances to the lake floor can cause methane to be released, which can quickly overwhelm and asphyxiate the unwary (the island is a real place in Western Uganda, and the gaseous phenomenon known as mazuku has been observed in several lakes across Africa). Is it mere coincidence that the next time it happens it wipes out a boat of partiers that include the young woman’s cheating father? In “The Game” by Alvin L. Kathembe a very detailed game of pick-up soccer takes a dark turn as the two stron­gest players become the subject of a bet between their fathers. The final story is “Fair Trade” by Natalie Sifuma, a classic fable where a man wants very much to build a better house for his wife. He trades for stones but when they are stolen he goes to a sorcerer and trades something much more dear to identify the thief and get his materials back. As always, be careful what you wish for.

At the beginning of December Strange Hori­zons published a special issue featuring stories from Mexico. It starts with a fascinating entry, written as a play, called “Tsintatak” by Ateri Miyawatl. Written in Nahuatl and translated into both Spanish (by the author) and English (by Adam Coon), this describes a grandmother/granddaughter relationship, working together at the grandmothers’ house. They talk about local food and food in far-away New York before the speculative element comes into play at the end. It is much different from pretty much anything else I read this year. “Prometheus with a Happy Face ツ” by Daniela L. Guzman imagines Tsu, a tlacuache (opossum), hanging out with a jaguar in a denuded, post-climate-change world. He’s becoming increasingly depressed both because the situation is hopeless, but also because he’s learned of the legend where the tlacuache plays the Prometheus role in bringing fire (technology) to the humans that they’ve since used to ruin the world. They’ve also learned that the remaining humans are trying to wipe out even the memory of the animal species that have gone extinct, and they decide they won’t let that happen to them. This is one of the most charming Anthropocene stories I’ve read.

“Dark Star” by Vraiux Dorós (translated by Toshiya Kamei) is a story combined with com­mentary combined with speculation combined with rabbits, which I couldn’t fully grasp in a single reading. There’s a lot here to reward more careful reading. “Galaxy’s Best” by Luz Rosales is a viscerally creepy story about a human woman who becomes obsessed with the cruel alien chef/judge of an intergalactic cooking show. The shows end with the losing human contestants being abused and then eaten by the judge; Iris begins to sexually fantasize about that encounter and direct her career to get to that point.

Not associated with the Mexico special issue, but definitely international, is “Bitter Soil” by Cat Aquino in November. Set in the Philippines in 1745, Juana is a house servant on the plantation where her brother disappeared. This is an intense look at the depravity of slavery and the hope behind different forms of revolt and resistance.

Strange Horizon‘s sister publication Samovar publishes stories in translation three to four times a year. The October issue features “Express Train to Beijing West Railway Station” by Congyun “Mu Ming” Gu (translated by Kiera Johnson), in which a young businessman falls asleep on the train ride home and wakes to find a new conductor demanding a different kind of ticket. He emerges into a much-changed railway station, and it turns out that he can’t leave without a ticket either – in this case a diary or other reflection of his life. He’s entered a realm where different multiverse lines intersect (Twilight Zone style) and he needs some sort of memoir to identify which line he should be on… at which point he realizes that he can write himself onto another one. I appreciated the way the story plays through the consequence of that decision, such that when he’s an old man he finds himself in the interstitial station once more and gets to reflect on his changed life with a lot more context. Very well done. “20th Century Hotel” by Tomihiko Morimi (translated by Emily Balistrieri) is fascinating in a completely different way. Set in 1915, Heitaro is a very modern young man who completely rejects the “superstitions” about yokai and other supernatural stuff. That’s a challenge when he goes to investigate a haunted hotel room, where, in response to his presence, the hauntings seem to be escalating over time. In the end Heitaro’s stubborn commitment to rationalism is rewarded with a visit from the head yokai, who has some very sobering information to impart, but one suspects that if giant floating eyeballs and illusionary immolations haven’t shaken the young man’s convictions, neither will oracular proclamations.

Creative Surgery is Italian author Clelia Far­ris‘s debut collection (with translations by Rachel Cordasco and Jennifer Delare), and it’s a great start. The first story, “A Day to Remember” is an extended meditation on living in a world that feels much smaller when circumscribed by cli­mate change. We follow an artist in a post-flood Italy as she tours her community by boat, barter­ing for what she needs while altering people’s memories to their preferences. They’re disrupted literally overnight by an extreme freak weather event, and we repeat the tour at speed as we see how everyone we just met has been affected by this new crisis. No one escapes unscathed, but some personal change is positive; nothing is ever an unalloyed negative. My two favorite stories in the collection, “Secret Enemy” and “Rebecca“, both have protagonists trapped in a single room for reasons that are hidden until the very end. In the first, a male character seems to be a doctor of some sort, forced to provide treatment through a mirror/portal to an eccentric billionaire. The nar­rator obviously loathes his patient and practices bonsai to keep himself calm and centered. We watch as the man in the mirror becomes increas­ingly unhinged after a bad relationship, and it only takes subtle nudges from the “physician” for things to go even further off the rails. “Re­becca”, on the other hand, is trapped in a single room of a huge estate owned by her ex-husband, which seems to be experiencing some very odd physics. She’s continuing some level of physics research by scribbling on whatever paper she can find, but it’s not until her husband’s new wife comes visiting (á la Bluebeard) that we learn just what’s going on. The final story of the collection provides the title, and it imagines a future where “Creative Surgery” allows for the creation of all kinds of grotesque chimeras. In a world where medical students will assault people for any kind of biological tissue to work with, Vi Stern is a successful engineer of these hybrid creations and the narrator is a tech well suited to help her cause. The fact that the tech is also embezzling most of the profits from the ventures for their own body modification program seems to cause Vi no trouble at all. In this story no one is quite what they seem, and Vi’s dramatic disappearance at the end causes many threads to finally unravel, to be tied up relatively neatly in the conclusion. This is a disturbing vision of the future, with multiple layers when it comes to the questions of what is “natural” and what is “acceptable.” 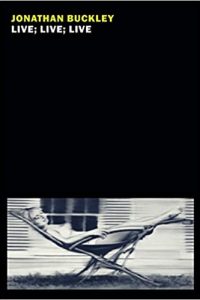