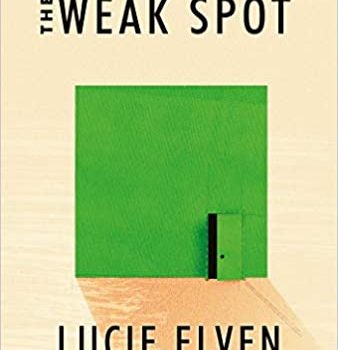 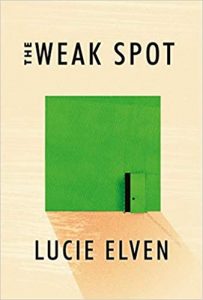 Lucie Elven’s novella, The Weak Spot, is set in a village somewhere in Europe; “an unrushed place” situated at the top of a mountain, which can only be reached by a funicular. Into this secluded environment comes our unnamed narrator, a young pharmacist who scores a gig at the local chemist, under the tutelage of its owner August Malone. From the outset Elven, and her heroine, leave us in no doubt that there’s something odd and unstable about the Head Pharmacist:

He was a large man of around fifty with an up­per lip that dropped beautifully over his mouth. He looks unregulated and liable to weep yet also orderly, a wardrobe out of whose stuffed shelves coats and pillows would tumble if you opened the door with care.

With peculiar, even unhealthy views on how to do business, Malone sets out what is expected of the narrator; how she should “experience the customer’s needs more urgently and their disap­pointments more keenly than [her] own,” and “ask them what they were hoping for, about their ambitions, and… to remember all those details for the next time they came.” As the days and months progress, trapped in the hermetic environment of the village, the narrator feels her sense of self slipping, subsumed by the stories and whispered rumours of the townspeople and the machinations of her boss, now running for Mayor.

While nothing outwardly speculative occurs in The Weak Spot, early on our narrator is told about the beast that stalked the region: “a monster, a hyena or a wolf crossed with god knows which leopard.” The creature never makes an appearance, but that tale, quite cleverly, sets a dark, fairytale-like tone for the rest of the novella. Added to this is Elven’s refined prose, saturated with imagery, which lends the story a claustrophobic atmosphere. Simply put, The Weak Spot is a powerful and dis­comfiting tale about power and populism. August Malone is the perfect fairytale villain, in one re­spect a blundering oaf (a cross between Trump and Boris Johnson), and in another respect a Machiavel­lian monster who gaslights and manipulates those around him, particularly women. In the actions of our narrator, we see how quickly a person can lose their sense of self and become complicit to the desires of a dominant, charismatic individual, but also the extraordinary effort it takes to break-free of that person’s influence. It’s a state of mind that I believe many of us can relate to, especially given the past 12 months; it certainly resonated with me.

The Weak Spot is a strong debut, a contempo­rary fable, beautifully written, that feels very much of the moment.