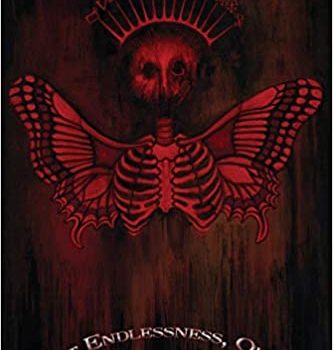 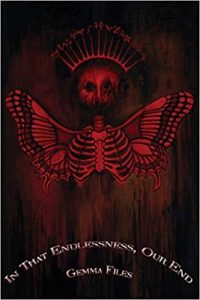 Fifteen recent (the earliest appears to have been published in 2017) stories by Canadian writer Gemma Files combine to make a terrifically ter­rifying collection, In That Endlessness, Our End. Files doesn’t exactly expose the horror found in the mundane because, once the thin veneer of normalcy is scratched, very little is mundane about her fictional realm. Dreams are always nightmares, residences provide discomfort, offspring are no delight, encounters with the eldritch are common, families are invariably dysfunctional, relationships tend toward the doomed, and even the electrical grid is a thing to fear.

The indelible lead-off story, “This Is How It Goes”, is about a particularly nasty apocalypse in which folks literally split into two; the original and the “dupe” then fight to the death. A women trying to wire lighting in her condo discovers electricity can be evil (and that we all doomed). A character in “The Puppet Motel”, one of the best stories in the book, senses a beckoning tone of wrong­ness in a new luxe high-rise apartment. “Come Closer” relates how a creepy house moves about the neighborhood and entices even the wary to enter. A dentist invests in a film and gains access to its alluring aged-yet-ageless B-list star in “Cut Frame”. In “Sleep Hygiene”, a questionable therapy for a dangerously sleep-deprived insom­niac leads to something worse than nightmares. Expectant parents are tortured by repulsive smells and disturbing music in “Always After Three”. In “Thin Cold Hands”, the survivor of a dreadful childhood mothers a strange daughter. “Venio” tells of a group of writers who play a prompting game that opens a door to something horrific. A young woman meets her paternal family in the strikingly descriptive “Look Up”, and whatever she (or the reader) might expect is not what hap­pens. The power of cinema takes on an entirely different meaning in “The Church in the Moun­tains”. “Distant Dark Places” reveals a way to fix all the ills of the Earth, but “every new beginning comes from some other beginning’s end” and “Worm Moon” are also about an existential reset point. Anger is bottled in “Halloo” to an eventu­ally devastating effect. “Cuckoo”, the collection’s concluding entry, deals with disappointed parental expectations. In That Endlessness, Our End is a must-read for horror aficionados who delight in dread.