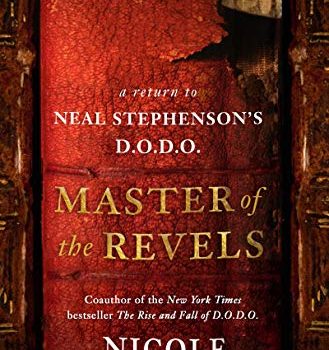 Galland, Nicole: Master of the Revels

Science fantasy time-travel adventure novel, a sequel to The Rise and Fall of D.O.D.O.. A daring young time traveler must return to Jacobean England to save the modern world. Co-written with Neal Stephenson.

Alternate-history fantasy novel, the third book in a series featuring mercenary gunslinger Gunnie Rose, who this time travels to the Russian Empire (in San Diego) to rescue her magic-wielding sometimes partner, Prince Eli.

Young-adult SF novel, sequel to The Truth App. Jarli only narrowly escaped death after his world-shattering app made him infamous. Now there’s a new foe afoot and Jarli is far from safe.

SF novel. A man battles his addiction to a devastating nanotech drug that steals identities and threatens the survival and succession of mankind as a galactic species.

Young-adult fantasy thriller. Kira Adams has discovered a cure for death, and it may just cost her life. Marti Leimbach’s first YA novel.

Original anthology of 19 stories celebrating inspiration in all its forms. Authors include Kevin J. Anderson, Neil Peart, October K. Santerelli… The sixth volume in a series in support of the Don Hodge Memorial Scholarship Fund for the Superstars Writing Seminar.

Middle-grade fantasy/mystery novel. Nothing is what it seems and there’s always more than one side to the story as a group of strangers trapped in an inn slowly reveal their secrets in this new standalone mystery set in the world of the best-selling Greenglass House.

Paranormal romance novel, book 11 set in the Fever world. MacKayla Lane faces the ultimate threat when war breaks out between the kingdoms of shadow and light.

Videogame tie-in, the first volume of the official novelization. Mysterious explosions have rocked the planet, setting off a series of supernatural phenomena known as the Death Stranding. Spectral creatures that devour the living have pushed humanity to the brink of extinction, causing countries to fall and survivors to scatter and live in pockets of isolation. Translated by Carley Radford.

Videogame tie-in, the second volume of the official novelization. Translated by Carley Radford.

Nowakowska, Maggie, ed.: Geek Elders Speak: In Our Own Voices

Non-fiction. A selection of essays and interviews about the history of women creators in SF/F and media fandom.

SF adventure novella. One woman will travel to the stars and beyond to save her beloved in this lyrical space opera that reimagines The Little Mermaid.

Young-adult fantasy. Sixth novel in the Miss Peregrine’s Home for Peculiar Children, concluding the series. Jacob and his friends face deadly enemies and race through history’s most dangerous loops.

Collection of 15 stories, one new, delving into notions of family, identity, indebtedness, loss, and hope, while merging literary fiction and magical realism.

Young-adult urban fantasy set in Toronto. A queer cast of characters races to stop a serial killer whose crimes could expose the hidden world of faeries.

Wagers, K.B.: Out Past the Stars

Tie-in novel based on the movies. A tech team goes to set up the environmental systems for a new colony, but has to deal with both tricky diplomacy and a series of hidden caves containing deadly secrets.

Dystopian reimagining of Wide Sargasso Sea set in Andalusia. After the ravages of the Green Winter, Earth is a place of deep jungles and monstrous animals. The last of the human race is divided into surface dwellers and the people who live in the Upper Settlement, a ring perched at the edge of the Earth’s atmosphere.

While reading for Locus this year, I kept an unof­ficial list of notes about things I wanted to mention in my end-of-the-year es­say. The biggest word on the list is “WITCHES,” which cropped up in more than one memorable title to cross my desk. From the field hockey team that takes a solemn oath within an Emilio Este­vez notebook in Quan Bar­ry’s We Ride Upon Sticks to the mill workers