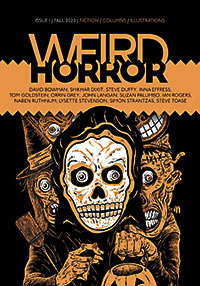 Fall 2020 brought a new online magazine, a new print periodical, and the return of a digital magazine.

Baffling launched October 1, 2020 with four “unapologetically queer and unashamedly weird” stories of under 1,200 words. (Going forward they will publish one flash story a month on Patreon, compile the offerings quarterly, then publish that for free online.) Baffling #1 offers a welcome glimpse of Jewelle Gomez‘s vampire Gilda in the future with “Merida, Yucatan: 2060” and a terrifying tale of suburban wildlife in “Velvet” by Nino Cipri. Less successful, but still interest­ing are science-fictional siren song “From the Deep, the Music Rises” by Izzy Wasserstein and Maxwell I. Gold‘s “Cellars, Caskets, and Closets“, a story of madness.

Weird Horror #1 also debuted in October. It is a handsome new print periodical featuring “pulpy dark fiction in the weird fiction and horror genres” with plans to publish twice yearly. The inaugural issue is something of a mixed bag. “Children of the Rotting Straw” by Steve Toase is weird but not pulpy; in an eerily empathetic story of a mother and child trapped somewhere the sky is made of sticks, there are child-stealing scare­crows, and corrosive wool falls from the sky.

“You Can’t Save Them All” by Ian Rogers is an effective horror story. Case worker Veronica knows she shouldn’t get attached to the children she deals with, but Susan seems to be an excep­tion. Veronica soon finds out just how exceptional the child is, and her own specialness is revealed.

“White Noise in a White Room” by Steve Duffy takes place sometime after 1974, during The Troubles in Northern Ireland. A man with no discoverable identity has gruesomely murdered “suspected informers… victims of summary Re­publican justice.” Captured by the British Army, the man gives up nothing despite “by-the-book” torture techniques. “Simply by being there – by sitting in a crate and not lifting a finger – he’s beating us.” The major in charge wants “to hear from his own lips who he is,” why he did what he did, and “then I just want to be rid of him.” He calls on an old mentor who specializes in obtain­ing information who was forced into retirement; he would have, otherwise, been removed from service on psychiatric grounds. It is a deep story that takes some time to process, but in the end it stays with you – horror, neither weird nor pulp.

Shikhar Dixit‘s “The Night Kingdom” is pleasing pulp. A reporter in search of a book that dooms the reader discovers, of course, some very dark reading material.

“Where The Hollow Tree Waits” by John Langan is definitely weird. Father Les tells his son, 17-year-old Martin, about a dream; a dream about his wife’s death; a very strange revealing dream.

One might term Suzan Palumbo‘s enjoy­able “Her Voice, Unmasked” steampunk pulp. Justine is a performing automaton: the operatic range of her voice is vast, her dancing technically perfect – but, to the Maestro, her creator, she is a failure because she lacks emotion.

“The Devil and the Divine” by Inna Effress is pure pulp. Clava acquires a ring that will help ensnare “the object of her passion.” Of course, there is a price to pay.

“Krazy Krax” by Naben Ruthnum tries for pulp, but doesn’t quite make it. After doing away with his wife and children, a psychopath receives packages ordered by his son from a 1965 comic. For some reason, he feels he has to travel to the distributor. The ending didn’t work for me.

Fantasy is not exactly a new digital magazine, but it has been on hiatus since December 2016. It re-emerged with a November 2020 issue, #61, under the direction of editors Arley Sorg & Christie Yant. Issues feature four original stories (two short and two flash) plus two poems.

Shingai Njeri Kagunda plays with time in “And This is How to Stay Alive“. After her brother Baraka commits suicide, Kabi imbibes a potion that seems to offer a chance to change the past and save him. A touching story that excel­lently uses non-linear time.

Reina Hardy‘s very short “An Introduction” is a nice lesson concerning the nonexistence of magic doors.

The narrator in “To Look Forward” by Osa­hon Ize-Iyamu is an outstanding student. Graduat­ing junior school, she must decide on her direction for the senior level. Her mother offers her only two choices: science or social science, but she prefers the arts. Ize-Iyamu efficaciously explores themes of potential and one’s responsibility to others and oneself in the period between child­hood and becoming an adult.

Tamoha Sengupta‘s “Love Laws and a Locked Heart” relates the tale of Princess Nivedita who “is one year old when a wizard named Yash locks her heart and steals the key.” An enchantingly unpredictable fairy tale. 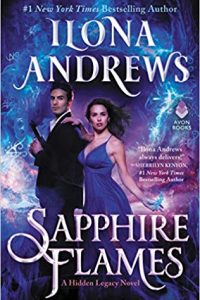 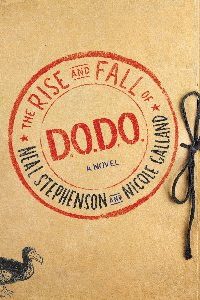