I think we can all agree that 2020 was a pretty horrible year. Nonetheless, I am not willing to write it off entirely, if only because it gave us new books by both M. John Harrison and Christopher Priest. These two British writers both began their extraordinary careers in 1966. That’s fifty-four years ago, folks! The fact that both men are still operating at the top of their game is some kind of miracle, and also a testament to their innate talents and perseverance and dedication to the field. We do not encounter their like too often.

I had my say about the Harrison book previously on this site, and now I get to take a look at the Priest. Thus doubly blessed, despite the dismaying events of 2020, I deem myself very lucky indeed, as should you, if you opt to enjoy these novels.

Priest returns in these pages to his fabulous demesne of the Dream Archipelago, that collection of islands large and small, where time and space are fungible, flexible, and flummoxing, and where even the most mundane activities exhibit an aura of estrangement—proving if not always necessarily perplexing to the citizens of the Dream Archipelago themselves, then certainly to Priest’s readers. I invariably somehow associate Shaun Tan’s graphic novel The Arrival with Priest’s oneiric venue, since I feel like Tan’s immigrant protagonist in a weird land, where meaning seeps in gradually.

The first thing to note is that this installment of Dream Archipelago lore is not as epic and as twisty and mind-boggling as its predecessor, The Gradual. It has sufficient enigmas and reversals and inversions to qualify as truly Priestian, but it’s a more streamlined and linear exercise. One gets the feeling that Priest wanted to demonstrate that he could produce something of a straightforward “thriller” instead of his typical recomplicated labyrinth.

That genre term “thriller” is particularly apt, since our hero, Todd Fremde, is a writer of such novels. He lives on the congenial island of Salay Raba with his partner Jo, who is a visual artist and designer. We might call Todd a pretty successful mid-list author. He earns a living from his popular, critically lauded but not best-selling books, producing one a year. He strives to avoid hackdom, concentrating on psychological mysteries that pay particular attention to character over plot. You might regard him as a less-outrageous, less-rich, less-obsessive Georges Simenon. For him and Jo, life is good, its placid surface rarely ruffled by the kind of calamities found in Todd’s books. But all of that is about to change.

Todd accepts an invitation to speak at the University of Dearth, on that island of arctic conditions and weird temporal and spatial “mutability.” He can’t resist the honorarium and the implied honors. But the trip proves to be wearisome and trying and unsatisfying. His stay on Dearth ends with two days of involvement with a Dearth Police Inspector named Frejah Harsent, a bristling dynamo of coarse and possibly lethal attitudes. When Todd finally gets home, he imagines all the oddness of Dearth has been left behind.

But two things have accompanied him back to domestic tranquility. The first is a very bizarre electronic card which he blithely inserts into his home computer’s slot. This act is not without consequences. But even more crucially, Inspector Harsent has told him a fascinating story about two murders that occurred in the past in the Salay isles. This tale tweaks Todd’s professional instincts. Perhaps there’s the makings of a novel here. So he enlists the services of his research assistant, retired cop Spoder, and they start delving into the cold case affair. Before you can say “Alfred Hitchcock,” Todd is being pursued by a killer and in danger of losing all his status and security. The ending of this affair will be both predictable and surprising.

Priest keeps several wheels spinning in intricately geared ratios, and together all the parts conduce to a finely tuned engine. First is the delineation of Todd’s character. He’s something of a fussbudget and mandarin. You wonder how he got lucky enough to hook up with his lively and commonsensical wife Jo. He has definite intellectual precepts about the type of fiction he writes, and is not averse to sharing them. Priest uses this tendency of his hero to actually deliver a mini-thesis on what makes a good mystery-cum-thriller book. Very fascinating. In contrast the Todd, the sidekick Spoder is a delight, a kind of wild-eyed daredevil with his own enthusiasms.

Priest also uses this book of course to convey more information about the Archipelago, especially its social stratifications into 12 levels of citizenship. I do not recall getting this data in previous books. There’s also a tie to the ongoing war that was the main focus of The Gradual.

The actual crime at the center of the book is nicely conceived and elaborated as well, providing all the pleasures that readers expect from a mystery. Priest even has a wry chuckle at his own expense, since part of the mystery involves a stage magician and twin brothers. Sound anything like The Prestige to you?

For a narrative that actually is more cerebral than physically violent, this book manages to deliver lots of suspense. The long car ride that Todd takes with Harsent is a case in point. By subtle narrative techniques, Priest has us expecting the worst to happen at any moment, and the seeming anticlimax leaves us wrung out. A similar but lesser incident involves Spoder and Todd in an amusement park.

Ultimately, this novel, while ostensibly crystalline and linear and simplified, is a clever metatextual exercise, since it replicates for us and for Todd the kind of adventure he only generally writes about. As he notes:

The classic crime story was always a kind of artifice, and no reader or writer thought otherwise. But all thrillers, made as fiction, require special conditions for the story to work. Crime writers create self-contained worlds, or at least they carefully contrive a special area of the world that only seems realistic, where what we know about the reality of murder and its detection is set aside, forgotten.

Leave it to this long-serving master of slipstream fantastika to create a potent crime novel that is at once mimetic and surreal, both a commentary on the form and a fascinating exemplum of the art. 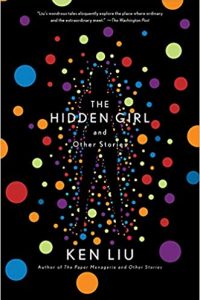 Gary K. Wolfe Reviews The Hidden Girl and Other Stories by Ken Liu