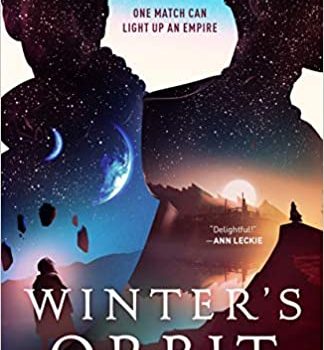 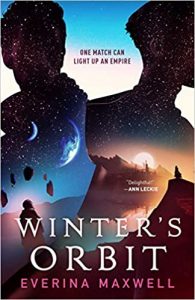 Everina Maxwell’s Winter’s Orbit is a debut novel with an interesting history. A version of this novel was first published online, where I encountered (and enjoyed) it as “The Course of Honour” on Archive Of Our Own (in the Original Works category). Winter’s Orbit as published by Tor Books is different in some respects from “The Course of Honour”, most obviously in the more detailed attention paid to worldbuilding and the wider scope accorded the political situation, but the core narrative arc – the developing relationship between the protagonists – remains familiar.

The Empire of Iskat rules over several planets. The greatest local power, it secures its treaties through marriage into the imperial family. Those treaties have more than local importance, because they are part of its agreement with the Resolution – a galaxy-spanning federation of powers that keeps other, larger, and more preda­tory empires from invading.

Count Jainan of Thea was married to Prince Taam as part of the treaty securing Thea’s par­ticipation in the empire. But with Taam’s sudden death in a vehicle accident, the treaty must be secured with another marriage, especially as Iskat’s 20-year agreement with the Resolution is fast coming up for renewal. Jainan is determined to do his duty, even if his marriage to Taam – a horror-show of emotional abuse, control over his communications and movements, and escalation to physical abuse – convinced him that there’s no pleasure in it, and that he doesn’t deserve to expect a minimum of consideration and care.

Kiem is a bit of a playboy prince, a royal reprobate with few achievements to his name (though he managed to get himself exiled to a monastery for a while, once). Summoned to the imperial presence, he finds himself ordered to marry Jainan for the good of the empire – rather to his horror. His cousin Taam was a golden prince, a military colonel, handsome, dashing, accomplished: everything Kiem knows full well he isn’t. How awkward to marry a man – smart, attractive Jainan, with a doctorate in space en­gineering and the kind of quiet self-possession that Kiem could never possess – who must still be deep in mourning for his first husband. And how even more awkward to be informed by the palace’s chief of public relations that there can’t be a hint of a leak of marital unhappiness, so they needs must share a bedroom.

Kiem wants to make things as easy as pos­sible for Jainan: not to push, or pry, or to expect that Jainan wants to have much at all to do with Kiem beyond what’s necessary to keep up ap­pearances. Kiem is pretty convinced he’s not a great catch. Jainan, meanwhile, expects Kiem to behave like Taam – and his understanding of his duty requires him to endure it. Mutual miscommunications abound, as does mutual attraction – and misunderstanding.

That would be awkward enough, but Thean political opinion is growing more and more volatile, and Jainan has been discouraged from communicating with his family and his country­people for several years – and now it transpires that Taam’s death may not have been an accident. The consequences of petty embezzlement, or something worse? Either way, the agreement with the Resolution is in jeopardy. And when Kiem and Jainan try to clear Jainan of suspicion and find out who actually killed Taam, they find their own lives at risk. The fate of their societ­ies rests on their shoulders, because they’re the only ones in the position to find the truth and re-establish the treaty agreement on terms everyone can live with, and if they don’t….

Well, Iskat is a very small empire, in the grand scheme of things. Only its inhabitants would notice if a larger one snapped it up.

Winter’s Orbit is a very promising debut. Its characters are engaging and believable: not just Kiem and Jainan, but secondary figures like Kiem’s extremely competent personal assistant Bel, who has a past and secrets of her own; Jainan’s cousin Gairad; and Professor Audel. Kiem’s awkward, well-meaning attempts to do right by Jainan and Jainan’s growing realisation that he means it, and the tide of attraction be­tween them all make for a compelling romantic arc – though I confess, I’m a bit of a sucker for queer arranged marriages. Maxwell is deft at dropping hints about the wider world and political scene, so that even though the emotional core of this story is domestic, the bigger picture never quite fades from view. And there’s space in that bigger picture for plenty more stories.

At the heart of Winter’s Orbit is an argument about healing, honesty, and the nature of trust and power. Well-paced and deftly written, it’s one of the most enjoyable space (or planetary) opera romances that I’ve had the pleasure to read, and I look forward to seeing more of Maxwell’s work in the years to come.