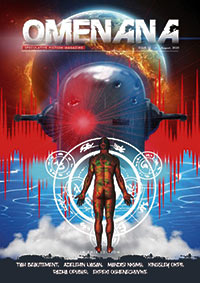 Beneath Ceaseless Skies has so many ex­cuses to celebrate! There are the big round number celebrations, like issue number 300 back in March, as well as September’s cal­endar anniversary. All the more opportunity to appreciate a venue that has steadfastly brought us excellent fiction from a broad range of writers, always expanding the remit of “literary adventure fantasy” in secondary world settings. September brings us Beneath Ceaseless Skies‘s 12th birthday with a big double issue to enjoy, with four longer stories from great authors. First up is “Many Mansions” by K.J. Parker. Told in Parker’s inimitable and highly readable style, Father Bohenna is a man who left backwater Mesoge to study metaphysics (not magic) at the Studium. Unfortunately, he keeps getting sent back there because “you really understand those people.” So he’s not in a great mood when he arrives and hears stories of witchy doings from the town leaders. The witch quickly reveals herself, but he figures he has little to worry about – after all, he is highly trained, and those rare women with any magical ability at all are simply wild, with no control of their powers. When the battle for dominance begins between them he’s confident he’ll wrap it up quickly. Obviously, it doesn’t go quite as smoothly as he predicts. All the world­building details and the interplay between the two combatants make for an enjoyable read. Richard Parks continues his Yamada Monogatari series here in “A Minor Exorcism” (these characters also showed up in “Uzumaki of the Lake” in Beneath Ceaseless Skies #300). Yamada, now lord of a small domain, joins priest Kenji on what’s supposed to be a routine exorcism in a corner of his realm he had not yet visited. The freshly dug up and gnawed corpses are a clue that this may not be so routine, and there’s an atmosphere in the village that screams “not quite right” when they arrive. They soon identify certain youkai behind the disturbances and find themselves in a fight for their lives. Luckily there are off-stage actors who are looking out for their well-being.

“The Heart That Saves You May Be Your Own” by Merrie Haskell is a second-person narrative where “you” are a young woman out on the frontier prairie on a quest to find a unicorn and take its horn – it’s the only way you can have an honorable marriage. Your mother wasn’t able to fully train you before she died, and this tradition comes from the old world, where unicorns were much, much more abundant than in the West. Your intended would be fine with a less-than-perfect wedding, but you’ve completely internalized what the quest means for your self-pride and you come very close to death in its pursuit. I liked that this story completely eschewed any predictable vil­lain tropes that sometimes come with the weird western subgenre. Finally, we have “A Tally of What Remains” by R.Z. Held. A blood mage woman is trying to keep body and soul together in a homestead where her family has all died of the Fever. She’s carrying on the work of caring for anyone who collapses at her door with that same plague. While most of her patients inevitably die, one survivor has lost his partner and blames her at first. He hangs around, trying to prove her negligence, but as he takes up part of the burden of caring for the ill he realizes what an impossible task she’s given herself. It takes a major conflagration at the climax to shake her out of her rut of suffering and allow her to move forward again as a human being. The story is very well written, very intense.

It’s always a pleasure to see a new issue of Om­enana, and this one continues its strong tradi­tion of storytelling from Africa and the African diaspora. The lead story is “The Beginning” by Radha Zutshi Opubor, a very new author. A young woman’s family stayed in the City even as it started to flood, a situation that has been getting worse over the course of years. Her mother leaves and eventually she and her father also try to escape – perhaps too late. The story has a well done twist in its tale that ties the title in nicely. An even stranger story is “Cycle of the Eternal Witness” by Adelehin Ijasan. In the distant future near the end of the universe, a man crashlands his spaceship near a black hole. He is rescued by someone he quickly realizes is himself. The strange physics near the black hole allows them to keep the universe renewing, but only by using their god-like perspectives to make sure everything happens exactly as it had before – all the joy/pain/suffering/exaltation – lest they risk it ceasing to exist altogether. The newest version of the man has to wrestle with what this all means, even as it all unfolds once more. This is a dark and thoughtful story. Tiah Marie Beautement brings us a slightly lighter story in “The Bend of Water“. In a future where the Americas have slavery once again, refugees are attempting to flee to the prosperous African Union. At the same time, the newest generation seems to be evolv­ing some level of electromagnetic superpowers. Xiomara has been using hers to smuggle people to safety, while Nobutho has been serving as a patroller under her father’s military command. They meet in conflict but soon fall in love – how to reconcile their different missions?

“The Mannequin Challenge” by Oghenecho­vwe Donald Ekpeki also features strange powers of a sort. An unpleasant man has a run-in with an elder who curses him. He remembers enough of the magic of his grandparents (before his parents converted to Christianity) to partially protect himself. It turns out that he can swap bodies with a mannequin in a moment of crisis, letting the dummy take the hit for him. He’s thinking that he might be able to use this as a superpower of sorts, but then he puts it to one more test…. Even fantasies aren’t always like the superhero movies. Mandisi Nkomo brings us “Do Androids Dream of Capitalism and Slavery?” In this story, future robots are looking back at archival footage from before they took over. Arguments about what robots are, how they should be programmed, and how they should be used are presented. One argument is that robots can be the slave-like foundation of a capitalist utopia only if not given feelings – but they were, and we learn through the analysis of the footage exactly how that played out. This story weaves a number of different lay­ers together with a multiplicity of perspectives that I appreciated. 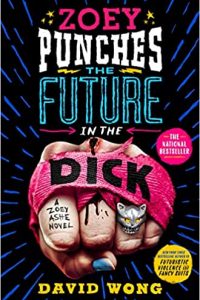