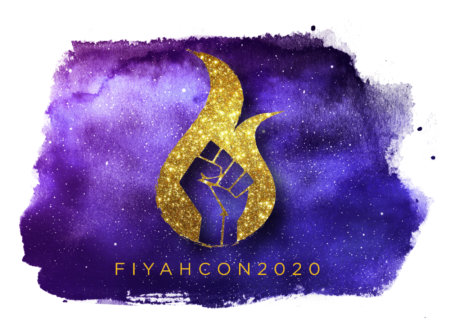 The inaugural FIYAHCON took place online October 17-18, 2020, held via Zoom and Dacast, and hosted by FIYAH magazine. Guests of honor were Yasser Bahjatt, Cassie Hart, and Rebecca Roanhorse. Accord­ing to convention director L.D. Lewis, the event was conceived mid-year, in the midst of protests, the COVID-19 pandemic, and the trend of conventions switching to virtual events; it was “for­mally launched” July 7, 2020, and the Ignyte awards were conceived following the 2020 Hugo Awards ceremony. In her retrospective on her site, Lewis said, “It would be virtual, it would be inclusive, and it would, as all things FIYAH, prove to the community that such a thing as an inclusive, accessible, diverse, dynamic convention where people and entities have their names properly an­nounced and see more than one brown face on a panel at a time on anything other than a Diversity Panel, could exist.” There were 1,128 registered members and 978 active attendees. “I’d considered the event experimental, and so capped it initially at 500 tickets,” Lewis said.

The online event offered 55 programming options and featured 153 panel­ists. Opening ceremonies kicked off the weekend on Friday at 7:00 p.m. EDT. “FIYAHCON fringe” came next: hourly panels available to view for free and scheduled at times intended to be more convenient for international attendees, beginning with “Superheroes Around the World” with Iori Kusano, Brandon O’Brien, Charles Tan, and Fran Wilde and “My Skin Isn’t Caramel, My Eyes Aren’t Chocolate: Colorism Among Us” with Vida Cruz, Jordan Ifueko, Chinelo Onwualu, Kate Osias, and Subdhana Wijeyeratne. Fringe panel­ists were predominantly international industry notables, such as Zen Cho and Samit Basu, and ran until Saturday, finishing with “We Won’t Phone It In for an Anglophone Audience” with Oghenechovwe Donald Ekpeki, Christina Jurado, Shingai Njeri Kagunda, Haralambi Markov, and Brandon O’Brien.

The inaugural Ignyte Awards, which seek to “celebrate the vibrancy and diversity of the current and future landscapes of science fiction, fantasy, and horror by recognizing incredible feats in storytelling and outstanding efforts toward inclusivity of the genre,” streamed live Saturday at 5:00 p.m. EDT, hosted by BookTuber Jesse of Bowties & Books. Awards winners and finalists received “challenge coin” trophies in velvet boxes. Closing ceremonies marked the end of live-streamed panels Sunday at 7:00 p.m. EDT. After the con, many of the panels from both core and fringe programming were made available for members on the FIYAHCON site, as well as a set of previously unavailable, prerecorded panels, each titled “State Of” and focusing on a region or group, such as “State Of: Indigenous SFF” with Lee Francis IV, Darcie Little Badger, Rebecca Roanhorse, Kevin Wabaunsee, and Erika T. Wurth; and “State Of: Black SFF” with P. Djèlí Clark, Chinelo Onwualu, Tochi Onyebuchi, Arley Sorg, and Na’amen Gobert Tilahun.

Lewis says that a 2021 event is in the works, “definitely still virtual…. There are tentative plans for a book store and artists’ alley but we’ll see.” Next year’s event is scheduled for September 16-19.

This report and more like it in the December 2020 issue of Locus.