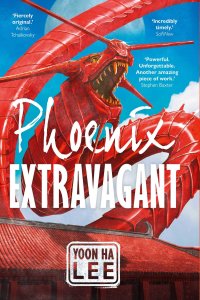 What exactly is “Phoenix Extravagant”? Very simply put, it is one of several magical pigments which, when deployed by an expert, can serve to program any kind of automaton, otherwise purposeless, with sophisticated behaviors and knowledge. (This notion of infusing non-sentient matter with agency, via arcane symbology, can also be seen in Bennett’s recent Foundryside, and one wonders if the ultimate origin of the modern trope lies with the legend of the golem and its shem-incised forehead.) Such is the occult technology in the land of Hwaguk, where our protagonist Gyen Jebi—also known by Tesserao Tsennan, a name bestowed by the Razanei conquerors of their country—is striving to make their way as an artist.

We pause a moment here in our plot summary. You note my use of “their” in the above sentence. Jebi identifies as neither male nor female, and so uses “they,” “them,” “their,” and “themself” as pronouns. Lee employs this fact about his hero/heroine masterfully and deftly, evoking a kind of linguistic strangeness that over the course of the novel becomes intimate familiarity. One is reminded of similar experimentation with language in Robert Silverberg’s A Time of Changes, wherein a whole culture had forbidden the use of “I” or “me.” Lee keeps the exact biological gender of his protagonist indeterminate throughout, even while sharing with us some pretty detailed lovemaking scenes, and ultimately achieves an expansion of readerly expectations about what can be done with a character’s gender.

Thanks to a myriad of telling cultural details, the reader soon discerns that conquered Hwaguk bears affinity to Korea, with the imperial forces of Razan standing in for the Japanese. In addition, invasive and demanding “Westerners” loom in the background as a third faction. It’s a rich scenario of two contentious cousin countries facing an alien third force.

Jebi has little interest in politics, however, although their sister Bongsunga is a committed loyalist and rebel. All Jebi wants is a job, to earn their living. With doors to the Ministry of Art closed, they end up taking employment with a secretive government agency called the Ministry of Armor, under a Machiavellian fellow named Hafanden. It turns out that Armor has created a giant killer automaton in the form of a dragon, and named it Arazi. But after some fatal malfunctions, including the death of the previous chief artist, Armor needs someone to refine and redraw the magical inscriptions that propel Arazi. So under the close eye of a deadly female soldier named Dzuge Vei, Jebi begins their work. But when out of curiosity and wonder Jebi endows Arazi with telepathic sentience, then the game becomes a dangerous one of rescue, sabotage, and flight.

After a series of unpredictable setbacks, Jebi and Vei—the latter now Jebi’s lover and a turncoat—reach the rebel camp and find Bongsunga playing a much larger role than her little sibling ever imagined for her, aided by a rogue Westerner named Red. (Shades of Tom Cruise in The Last Samurai!) But likewise, Jebi has also mastered new dimensions to their own powers, and willy-nilly they will have to do their part against the revengeful Hafanden and his army. After an exciting and eventful climax, Jebi faces one more challenge: how to escape this tumult of war with love and artistry intact—almost the territory of A Farewell to Arms.

Lee achieves the kind of thick anthropological culture building for which C.J. Cherryh is famous. The rivalries and shared heritage that propel the relations between Razan and Hwaguk emerge quite distinctly. The magical system is understated, logical and persuasive, granting good plot and visual effects. Through his sociopolitical labyrinth our author propels a very colorful and sharply drawn cast. Jebi is neither superhero nor idle dreamer, but a mix of contemplativeness and action. Vei is not just a stone-cold killer, but also a daughter and lover. But truly though, the great scene-stealer is the mechanical dragon Arazi, whose dialogue is always funny, sensitive and off-kilter in a convincingly nonhuman way.

The themes of imperialism and resistance receive a good airing, and Jebi’s quest for artistic fulfillment rings true. The tale moves swiftly and unpredictably, and all the action is well-staged. In short, this is a lovely fantasy that eschews epic sturm und drang for small-scale challenges, full of tenderness, brutality, and quotidian living. 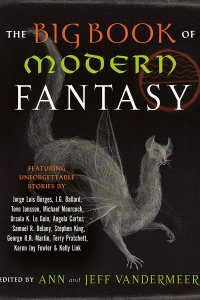 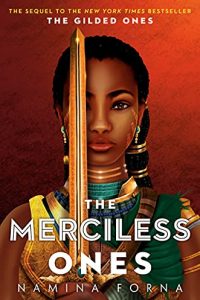