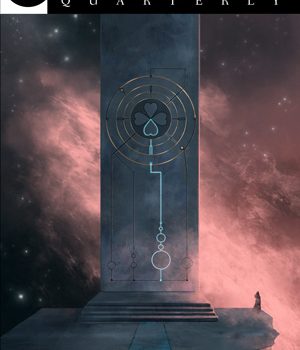 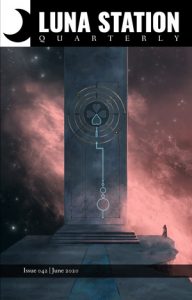 I appreciated “The LEAP Test” by Alex Jennings in July’s Strange Horizons. A young boy comes into a school counselor’s office, apparently because he has behavioral issues and needs to take a standardized assessment. It quickly becomes clear that he has lived an entirely different life in a fantasy realm, á la Narnia, and is having considerable difficulty re-integrating with the normal life of a child in our world. Apparently this happens enough that there is a standard, if clandestine, program for the people who find themselves in this situ­ation. I always appreciate stories that look at the long-term consequences of the tropes common throughout speculative fiction, and this is par­ticularly incisive.

The July story in Slate‘s Future Tense series is wonderfully charming. “Legal Salvage” by Holli Mintzer imagines folks in a near future who make a living scavenging and selling highly curated collections of vintage items, competing with the Amazons of the world by putting their own unique spins on their offerings. Mika and a friend go in on the contents of an abandoned storage complex and hire a robot to help sort through the piles and piles of stuff they find. In the process, Mika develops a good working rapport with the online helpline agent for the robot rental company. In the end it turns out that the agent and the robot might have a rather different agenda from Mika and her friend; the companion non-fiction piece, “How Can an A. I. Develop Taste?” by Kate Compton, is equally entertaining and thought-provoking.

In Apparition Literary Magazine #11, I liked two stories of unintended consequences and people who try to make things right. In “Saying Sorry” by Rebecca Fung, Grizila is an elderly fairy who was quite a prankster in her youth, often unthinkingly cruel. At the end of her life she is trying to apologize to humans she harmed and make amends, but it isn’t going well. She does finally befriend a young man whom she swapped at birth, but there are some ruined lives that can’t be recovered. It’s a story at once both funny and serious. Then in “Once Upon a Night” by Sam Muller, we have an academic mathematician whose idle idea (über-visibility, the opposite of invisibility) is picked up by an oppressive government. He quickly finds himself the head of a secretive research project, and, as some scientists push back, there are “accidental” deaths among the staff and even their families. Much like Grizila’s tale, the Professor has to decide what he can do to possibly make things right, and suffer the consequences of what he inadvertently set in motion.

I was able to check out two new-to-me venues this month. (Out of more than 15 on my tracking list! I think every time I get to a new magazine someone else goes and starts another one.) I was especially impressed by newcomer P.K. Torrens in the August installment of Kasma (which has an archive going back to 2009). “Crater Is­land” imagines a two-person scout team who are desperately trying to find a planet that will be safe for their orbiting ship full of frozen colo­nists. They also need to ensure they won’t harm any sentient life by settling down. Nothing has gone to plan: they’ve had to examine more than half a dozen planets, are running low on supplies, and their own repeated freeze-wake cycles are taking a toll on their bodies. Elida knows this planet has multicellular life, but she can’t quite figure out the link between what she sees in the microscope and the number of regularly formed craters near the beach. Eventually she has no reason to keep saying no to her colleague’s in­sistent requests to bring down the colonists, and of course that’s when all hell breaks loose. The ending is as chilling as it is sadly understandable.

I’m picking up Luna Station Quarterly with issue #42. Its by-line is “Stellar short fiction by women-identified writers since 2009.” It starts with “The Midwife” by Carol Scheina, in which Hannah is a foul-mouthed midwife who is able to magically relieve some of the pain and stress of labor by taking it into her own body, relieving that of the mother. In the story she goes to heroic lengths to save a breech baby from being stillborn, but the sting of the tale comes from her much gentler-mannered as­sistant. In “Depth and Meaning” by Jennifer Lee Rossman, we have an alternate world where witches have proved their worth and are (mostly) accepted. Emi is helping out with a giant mural that should help relieve the city’s drought, but her depression is keeping her magic from coming through into her art. After talking with friends and family, she decides to go for medical treat­ment, although it is somewhat stigmatized, and gradually realizes a genuine transformation. It’s lovely to read. More harrowing is “The White Place” by Dana Berube. Ti is a young gay man, also a wizard, in a world that’s hostile to both. Leaving his homeland, he’s wandering and try­ing to scavenge a living. He goes home with a well-to-do older man intending to simply sleep his way into a warm bed for a night. Instead a snow storm gives him an excuse to stay longer, and a tantalizing hint of what it could be like if he could just settle down somewhere with someone kind. Unfortunately, being accepting of one identity doesn’t mean being accepting of all, and that warm and fuzzy future depends on him hiding more of himself than he reveals.

Several of the stories brought a smile to my lips. I enjoyed “Moonlight Plastics” by Rachel Brittain, where Sana is an operative in an eco-collapse future who has botched a job and gotten shot. She’s saved from drowning by an eccen­tric researcher, and has to figure out how (and whether) to escape. “Ganymede’s Lamps” by Michèle Laframboise is a classic middle-grade SF story. Bethesda is a 12-year-old on Jupiter’s moon, trying to establish her own identity, and she’d really like a cat. Instead her favorite uncle brings her an alien “lamp” species, which immediately starts reproducing and threatening the entire base. Will Bethesda’s idea save the day? The ending isn’t much in doubt, but it is quite satisfying. In “Ther­aBot” by Hannah Frankel, a corporation would like to have AI “counselors” for their workforce (only partly to give them cover to fire employees in trouble). They ask Velma, a counselor close to retirement, to use her expertise to help program these robotic replacements. She does as asked, and we get to see how her work plays out even after she retires. A nicely imagined act of well-thought-out and humane resistance. 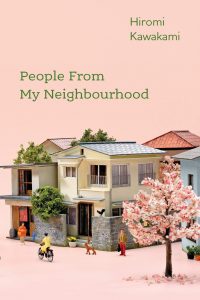 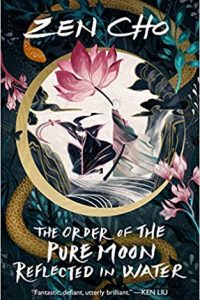 Gary K. Wolfe and Liz Bourke Review The Order of the Pure Moon Reflected in Water by Zen Cho 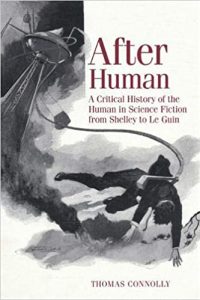