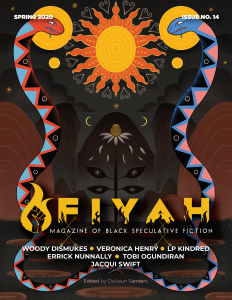 My favorite story in August’s Clarkes­world is “The Immolation of Kev Magee” by L.X. Beckett. Set in a near future of eco-collapse, it centers on Breeze, a very attractive but somehow naive refugee from Detroit. Breeze is trying to get ahead via the equivalent of vlogging in a commune set up near the Arctic by billionaire Magee, an Elon Musk-style figure. Breeze earns credits from gig work and by helping to foster a baby they and their friend Keisha rescued from Detroit. They’re members of the Orphan Club, which helps to organize resources for everyone, includ­ing housing and food, but that’s little help with a currently unadoptable, extremely colicky baby. In walks Zero, their Orphan Club “mentor,” with some fairly drastic plans to change their fortunes. Things get dramatic very quickly, and Breeze is stuck trying to find the catch… which will always eventually appear. I liked Breeze’s character and the society that has organized itself in the wake of disaster after disaster, a combination of philanthropy from the top and communal organization from the bottom, neither utopia nor dystopia. Perhaps that’s as much as we can hope for these days. And my hat is off to Beckett for the Robert Service reference as well, if I’m right in suspecting that the title refers to one of my favorite ballads, “The Cremation of Sam McGee”.

“An Important Failure” by Rebecca Camp­bell could take place in the same post-collapse time frame as Beckett’s story, but it’s seen through the lens of a man who wants to make a violin reminiscent of the masterworks of Stradi­varius in the 17th and 18th centuries. There’s a theory that the environmental conditions of Europe during the Little Ice Age changed, ever so subtly, how the trees grew, giving their wood properties that made them exceptional for use in stringed instruments. Our hero lives a full life, struggling with the world he lives in and its increasing scarcity, while continuing his obsessive search for materials that will let him make the perfect violin for one child prodigy violinist, even though she has long since retired and is living a very different life. It’s a story of hope in what seems like a fairly hopeless world.

Elsewhere in the issue we see “The Lori” by Fiona Moore, the story of a soldier searching for an autonomous battle tank he had been bonded to. He tracks it down by listening to rumors and local legends, finally reuniting with the rogue unit in Southeast Asia. As he tries to regain control of it, he badly misinterprets what it’s been trying to do on its own. Hat tip for the Dr. Seuss tie-in, not something you see every day in speculative fiction. “Drawing Lines Between the Stars” by Frank Smith imagines a scenario where a trade spaceship goes out of its way to help a solar sailor in distress. The engineer Bex starts in on repairs, but both Bex and the sailor Adena are overwhelmed by carbon monoxide poisoning, with Bex only barely surviving. After that brush with death, Bex decides to make a drastic change in his life. “The Plague” by Yau Leisheng (translated by Andy Dudak) imagines a very different scale of death. In this future the world has been overwhelmed by a silicon-based alien virus, one that slowly but inexorably turns its victims into stone. Our narrator is a Crow, one tasked with collecting the bodies of victims, even if they haven’t yet been fully transformed, and taking them to the incinerators in a futile effort to stem the spread of the virus. He meets a survivor in a school, surrounded by stricken students, and she has a competing theory about what has happened to the victims. It’s enough to make him, much like Bex, completely change the course of his life. I appreciated the huge shift in time scale at the end of the story.

Issue #15 of Fiyah has two chilling stories of very different vengeful entities. “Red Cloth, White Giraffe” by Yvette Lisa Ndlovu is told from the POV of a woman who died but cannot go on to the next world until a funeral is held. Her family won’t allow the funeral until her husband pays off his dowry debt to them, and until then she’s in limbo. She thinks back on her life and on the system that treats women as property and results in situations like hers. Eventually the funeral goes ahead, but by then she is in no mood to go quietly anywhere. The narrator of “The Last Testament” by Aurelius Raines II, in contrast, is an android crafted in the image of a very specific person. Ada, his creator, has made him to look just like Zahir, her brother who was killed by police. We pick up a lot of the back­ground while the robot is learning to be Zahir in the ways filtered through his programming; it’s not until the very end that we learn exactly the fate Ada has in mind for him and for the police.

Carolyn Ives Gilman has an intensely thought­ful story in Tor.com in August titled “Exile’s End“. Rue is the curator of a section of a museum dealing with the indigenous art of a people, the Atoka, thought long lost. The cen­terpiece of the collection is a stunning portrait of a woman, made with iridescent materials that sometimes show wings in the background of the painting. A mythology has sprung up around the woman in the piece, whom they call Aldry, in the absence of any surviving history from its makers. Everything Rue knows is thrown into doubt when a gentle and serious young man named Traversed Bridge comes to visit from another planet. He reveals the fate of the Atoka, chased from planet to planet, finally making a home for themselves several light years away. They have become the Manhu people over the centuries, having lost much of their culture and language. After a lot of research he has come to see if Rue’s planet is their original home and if they can make connections to it again. He instantly recognizes the artwork as being of his people, and he can interpret many things about it – including more of its real history, which is nothing like what Rue’s people had made up about it. Things come to a head during a cultural repatriation request (something a lot of museums are wrestling with today), which reveals that the piece was clearly stolen from its creators. The culture of the Atoka is to burn most of their possessions every three years in order to free the ghosts that inhabit those things. It is abhorrent to them that the ghost of Even Glancing, the woman in the portrait, has been trapped for centuries. It is abhorrent to the art lovers of Rue’s planet that a masterpiece like the portrait might be destroyed. There are no villains in this piece, and Gilman follows the story through without flinching away from the end. I imagine this story is heavily inspired by her real-life work at the National Museum of the American Indian in Washington, DC.

Also in Tor.com is “The Mysterious Study of Doctor Sex” by Tamsyn Muir, set in the same universe as her award-winning Locked Tomb series. This is a relatively light-hearted mystery where an ancient office is finally unlocked – but two not-so ancient skeletal hands are sitting on the desk. To whom do they belong and why are they there? It falls to two younger scholars to solve the case. I suspect that readers unfamiliar with Gideon the Ninth will have a harder time getting into the story. There is also “Flight” by Claire Wrenwood. The story imagines a woman who has been brutally modified and given wings. We start with the day she finally tells her five-year-old son to stop yanking on them, then we move step-by-step backward in time through his short life, and her own – how he’s treated, how she was treated, and what in society leads women into these patterns of mistreatment. The message is well taken, of course, but it’s the adroit handling of the backwards structure that makes this story stand out.

Beneath Ceaseless Skies #309 features a haunt­ing story, “The Many Lives of an Abiku” by Tobi Ogundiran. The narrator is a young girl who early on is ritually bound to keep her spirit with her family (after they lost too many chil­dren very young). She is an abiku, a spirit that would naturally roam, but she comes to love her human family very much. Unfortunately, she is tormented by the spirit Rewa, who seems to have a special interest in turning her and her human family against each other. Although there are clear reasons for everything that happens, the story quickly takes a turn towards the horrific.

Beneath Ceaseless Skies #310 starts with “Fire and Falling“, a long story by Andrew Dykstal. We follow Mir, a courier on a routine mission to deliver secret documents for her employer. As she realizes that she’s drawn much too much at­tention to herself, she destroys an airship to clear the trail. However she soon meets others who seem to have different theories about what she’s carrying, and when they book passage on an independently captained airship we learn more about the airships themselves. Mir may have a very different destiny than that of a mere courier. In “The Transubstantiation” by Evan Dicken, a small band of glory hounds (who are also ac­tors) are in the business of luring out “heroes” and dragging their bodies back for sale – you can make many powerful potions and relics from heroic bones and corpses, and there’s a central order that controls that process. The story starts out with an almost satirical take on the classic heroic sword-and-sorcery trope, but it takes a darker turn when an epic hero, thought dead, appears to have returned. Getting early wind of the development, our band of non-heroic glory hounds heads out towards another confrontation, one that has them re-thinking the social order of their world. 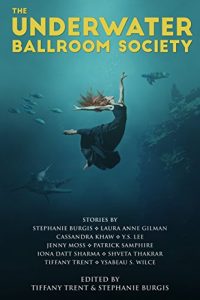