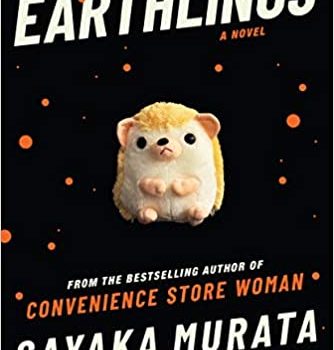 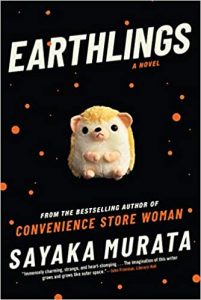 Earthlings, Sayaka Murata’s second novel to be skillfully translated into English by Ginny Tapley Takemori, is the evil twin to her much loved and critically acclaimed first book, Convenience Store Woman. That novel was a beautiful, poignant story about a woman in her mid-30s, Keiko, who has never fit in but who finds comfort in the rigid discipline of working at a convenience store. Earthlings also features a woman in her mid-30s, Natsuki, who, like Keiko, is aware she doesn’t conform with mainstream expectations. Both women go to extremes (and similar lengths) to be viewed as “normal” by society and, more specifically, their families. But whereas Conve­nience Store Woman has an eccentric, heartfelt (though never schmaltzy) quality, Earthlings is a dark, surreal, and brutal novel.

Initially, though, there’s an innocence to the opening thirty pages of Earthlings. We meet our narrator, Natsuki, at the age of eleven travelling with her family on the annual pilgrimage to her grandparent’s house for the Obon festival. There Natsuki spends most of her time with cousin Yuu, also eleven years old, and the only person who knows she has been granted magical powers by Piyyut, a plush hedgehog toy and resident of the Planet Popinpobopia. Similarly, Natsuki shares Yuu’s secret: he is an alien abandoned on Earth who spends his nights searching the sky for the spaceship that will one day take him home. The day before they part for another year, Natsuki and Yuu decide to marry. They swap wedding rings made from wire and draft a marriage pledge where they promise not to hold hands with anyone else, wear their rings while they sleep, and, most importantly, “Survive, whatever it takes.” The novel’s darker tone turns on that final promise. From the moment Natsuki arrives home, she faces unrelenting psychological abuse from her cruel, hectoring mother and sexual advances from her cram teacher. When a traumatised Natsuki returns to her grandparent’s house for the funeral of her grandfather, she convinces Yuu to consummate their marriage, only for their family to walk in on them post-coitus. Earthlings then skips two decades to a time when Natsuki is living in the suburbs of Tokyo with her husband, Tomoya. Her marriage, though, is a sham. She found Tomoya on a website devoted to “people seeking to evade society’s gaze.” For Tomoya, it’s concealing his intense dislike of the female body (having bathed with his mother until the age of 15), for Natsuki it’s disguising her identity – that she is a Popinpobopian, stripped of her magical powers and “adrift from her spaceship and unable to go home.” While husband and wife are content to stay under the radar, everything changes when Natsuki, on the suggestion of Tomoya, visits her grandparent’s house and is reacquainted with Yuu. Together again, Natsuki and Yuu, along with Tomoya, decide to reject their humanity and spend the rest of their lives as Popinpobopians.

Convenience Store Woman and Earthlings portray two women pressured by their families to comply with the demands of society: to work, to marry, to have children. In response, Keiko and Natsuki each arrange a marriage. Keiko does so (somewhat awkwardly by choosing her lazy, misogynist co-worker as a partner) to alleviate the concerns of her sister; Natsuki, however, acts out of fear. She views society as a dystopian nightmare, a “Factory” where:

everyone was brainwashed… and did as they were told. They all used their reproductive organs for the Factory and they did their jobs for the sake of the Factory. My husband and I were people they’d failed to brainwash, and anyone who remained unbrainwashed had to keep up an act in order to avoid being eliminated by the Factory.

It’s this perspective, which Murata never ridi­cules, that takes Natsuki down a much darker path than Keiko. In repudiating the Factory and what it means to be human, Natsuki, Yuu, and Tomoya find themselves shattering the taboos civilisation has fashioned over thousands of years. And while there’s never a sense that Murata condones or supports their extreme choices, her refusal to cast judgement allows the reader to view these monstrous acts as a reaction to society’s inabil­ity (or unwillingness) to accept those who are different, who don’t see life as a conveyor belt of production and procreation. I’m sure some will argue that Murata didn’t need to go to such stomach-churning lengths to make her point. But for me, it’s the book’s visceral, grim savagery, and those final shocking pages, that makes this such a vital, powerful novel. In the current pandemic haze where it’s easy for the days to blur together, Earthlings is the sort of challenging, confronting fiction that wakes you up with a jolt and leaves a lasting impression. 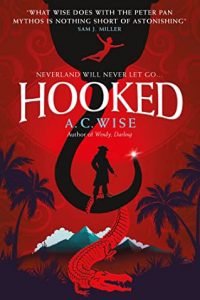 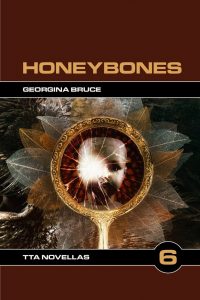