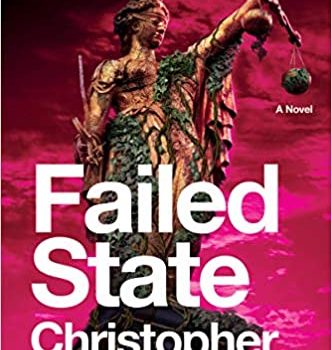 These days, reading anything scarier than “The Adventures of the Widdle Kiddons in Ice-Cream-Sundae Land” winds up reminding me of some bit of direness I’ve seen on the telly that morning. So when I saw the title of Christopher Brown’s new novel and recalled the spot-on dystopian vibe of its predecessor from last year, Rule of Capture, I wondered whether reading Failed State would be good for my peace of mind. Nevertheless, Brown has a strong line in neo-noir courtroom drama, and I have a weak spot for mean streets past, present, or future, so I read it anyway. I’m still not sure what it has done to my mental tranquility.

I called Rule of Capture “one long scary dream disguised as an entertainment,” and that blurbable description fits Failed State as well – a book that continues the portrait of a near future made mean by kleptocracy, corruption, and cultural-ideological conflict-unto-warfare. It’s a sequel that jumps over seven years’ worth of what were certainly sequel-worthy events in the career of frayed legal Quixote Donny Kimoe: a full-on revolution that ended with a toppled government, liberated concentration camps, heaps of dead, a deposed and condemned US President, UN peacekeepers, a new Constitution being wrangled over, and simmering, sub-civil-war hostilities among surviving and newly-arisen factions and power-structures. We do discover some of this colorful interval through Donnie’s recollec­tions and longer flashback passages distributed throughout the present action, a technique that permits questions to be raised and answered out of chronological order and allows surprises and trapdoors to be sprung.

Genre-wise, Failed State counts as a legal thriller, but, structurally, it’s a McGuffin-hunt that takes Donnie on a tour of various segments of the surviving polity. Thematically – well, I’ll return to that. One McGuffin is Donny’s client, who is unexpectedly and inconveniently revealed to be dead. The book begins in a courtroom, with Donny getting blindsided by that revelation because he hasn’t quite done his homework. His hail-Mary defensive play is to find out whether the client in question is actually dead and, if so, under what circumstances. That, in turn, requires making (yet another) deal with a devil to locate another human McGuffin, and that means returning to a place from which Donny has been banished by former client-allies. (Donny has a lot of former clients and allies, most of whom he has somehow failed or disappointed or otherwise parted ways with.)

These particular former allies have established a pocket idealistic-extremist regime and developed a back-to-nature vision that extends right down to the bare metal of the legal system. They have devised

a different kind of truth and reconciliation commission. One where the genocide was not of a people but of a place. An entire ecology of diverse lifeforms that had been extinguished by human appetite.

Their turf is the drowned, poisoned, gener­ally trashed, and now-redesignated Free City of New Orleans, and that is where Donny must go, ostensibly to arrange the release of an old friend/enemy’s daughter, where she is being held “on charges arising out of her family’s three genera­tions of crimes against the planet, things that had not been crimes until the insurgents took New Orleans… and made their own laws.” Ironically enough, it was Donny’s inventive legal reason­ing that contributed to these new laws and their underlying legal principles, before he managed to make himself persona non grata with possible extreme prejudice.

The mission to New Orleans is the thematic heart of the book. As Donny makes the rounds of people he has known, loved, helped, and seriously disappointed, he is given lessons in the collec­tive’s strategy and tactics and, more crucially, the vision that energizes them, that “animals, plants, and even entire ecosystems might have rights under the law” and that “it’s not just about liberating labor, or abolishing private property. It’s about creating a system that gives voice to the voiceless.” At its starkest, it is that

People suck…. Especially if you give them power, or money. They will hoard it, and never be satisfied…. It’s not fixable. I mean, not un­less you want to get way more radical. Like undoing-the-agricultural-revolution radical. Which is obviously not possible.

What Donny witnesses in New Orleans is as im­portant as the conversations and lectures he (and we) get treated to: natural systems reclaiming the ruins of the old city and people fitting themselves into that rewilding, operating cooperatively and without fixed hierarchies. All the while, Donny is looking for the angles that will let him win his own smaller battles and contemplating “the way his own desire to try to do something reasonably good with the particular tools life had bequeathed him more often than not caused him to fuck every­thing up for the people he cared about.”

The legal thriller and McGuffin-hunt sides of the novel come together with a snap that pulls all the story elements into line and explains the situation and the motives of the players. Climactic events take place off-stage, a narrative tell that points to the story’s real center. As with the “rule of capture” theory that provides the unifying legal view from the earlier book, the ideas that triumph matter as much as the plot-resolution outcomes of Donny’s exertions.

The Amazon rubric for this book is “Dysto­pian Lawyer (Book 2),” a marketing tag not on the digital advance copy I received, and not one that I find particularly apt. While the corrupt regime of Rule of Capture and the savagery of the counter-measures and counter-counter-measures and paybacks revealed in this volume are toe-curling, Failed State also portrays how the revolutionaries of New Orleans are looking for a way past the unsustainable ecological and economic practices that propped up the old re­gime. In the Acknowledgments, Brown writes, “This book was inspired by the idea of trying to imagine a future I would want [my daughters] to be able to live in, and trying to imagine the more hopeful world the protagonists of Rule of Capture and Tropic of Kansas fought to realize.” That hope shines through and takes the edge off my nightmares.