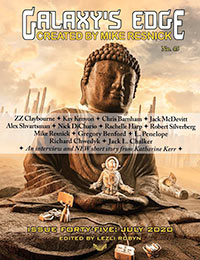 Leah Cypess returns with another strong fairy tale-derived story in the latest F&SF. Like her previous F&SF story, “Stepsister”, “Of Them All” is sharply focused on the moral effects of fairy magic – or, rather, on human choices that may or may not be at­tributable to fairy gifts. The protagonist’s gift is that she will only seem beautiful to people who wish her harm. This helps her detect en­emies, of course, but it makes it hard for her to find people who love her, or so, at any rate, she thinks. When it’s time for her to marry, the obvious choice is the eldest son of the duke of a fractious province, who sees her as plain – so he doesn’t hate her, anyway – but her sister dazzles him, and steals him away. It’s soon clear that this marriage has not tamed the province… and then the protagonist falls for the duke’s younger son. He seems to love her as well. But how can she trust this love? Perhaps another magical gift will help? But there’s a cost to that, of course. A very thoughtful story, though not quite as successful (for me) as “Stepsister”, which set a high bar.

There are more fairy “gifts,” sort of, in R.S. Benedict‘s “The Fairy Egg“. Bridget’s hus­band Mike can’t work after an accident, and their already limited money is dwindling, until Bridget starts selling eggs to the richer ladies in town, helped (maybe?) by “fairy eggs,” tiny, dark eggs with no yolk. Her success, instead of pleasing Mike, seems to turn him against her, especially when he gets involved online with a crazy Doctor’s sexist ideas and dangerous diet plans. The better Bridget does, the darker Mike turns, and the story turns truly scary, as Bridget’s options are constricted to a choice be­tween him and a mysterious man no one seems to see. This is a really effective piece riffing on feminist issues, class issues, and more, with no easy answers given.

Asimov’s for July-August is a very strong issue bookended by two novellas. Will McIntosh‘s “Nic and Viv’s Compulsory Courtship” is set in a smart city controlled by an AI named Jour­ney. Viv is a doctor, and contentedly engaged, when she gets a message from Journey saying that it has found the perfect match for her – a maintenance worker named Nic. Of course she resists – and so does Nic – but Journey insists they go on at least a few dates, or else risk expulsion from the city. We see where this is headed, of course – and indeed their relation­ship, their oppositeness, is perhaps a bit too heavily emphasized. What’s more interesting is the reason Journey has for its actions and the end result. Derek Künsken‘s “Tool Use by the Humans of Danzhai County” follows the fate of two people through the 21st century in China, both of Miao ethnicity. Qiao Fue is an ambitious young man who deserts his pregnant girlfriend to pursue his goals. Lian Mee is his daughter that he never knew, who is pushed to start her own company and develop a series of AIs by a bad experience at university (sexism and sexual harassment). Both change the world, but the question, as the decades advance, is who really improves lives? The answer is perhaps a bit too obvious, but the technological and social speculation is quite satisfying.

Two of the short stories are the best here, however. “Father” by Ray Nayler is set in an unusual alternate history. FDR is still president in 1956, WWII ended late, and the protagonist’s father died in it. Then he gets a new Father, a repurposed war machine, and reluctantly comes to accept this robot, which helps him deal with the local bullies. Robots, though, are regarded with considerable suspicion, and…. Let’s just say the story powerfully deals with love, revenge, and a sort of PTSD (maybe). Intriguing, quite different. Also excellent is “Bereft, I Come to a Nameless World” by Benjamin Rosenbaum. This is set in the very far future, when humans (or, really, posthumans) have dispersed across the stars… altering worlds, altering themselves, but, it seems, doomed to catastrophe, wars, violence. Siob, a constructed being, is fleeing yet another failed utopia and returns to a world he’s known before, and another of his fellows… ah, best to read it: a meditation on humanity, destiny, time, fate.

Analog returns to Mars with a couple of pieces in the July-August issue. Rich Larson‘s “Lowlife Orbit” tells of a cynical man stealing a rock headed to Mars as part of the terraforming effort – why send it there where it won’t help anyone for a thousand years? But does humanity have a future if it won’t think that far ahead? Andrew Kozma‘s “Mars, the Dumping Ground of the Solar System“, posits a future in which much of the System has been modified for human habi­tation, but the genetically engineered pioneers who can no long live in the places they modified are stuck in poorly maintained environments on Mars. I thought this a nice (if not quite convinc­ing) idea – the story itself, involving a Martian functionary trying to help a Mercurian find her lost daughter, is fairly routine, but nice enough.

The best story this issue comes from Alec Nevala-Lee. “Retention” is a dialogue between Perry, who wants to cancel his security system account, and an AI customer service rep, who is incentivized to keep Perry’s account active. The story sets up an intriguing dilemma for Perry, who cannot claim that the security system is subpar in any way, but who wants to be free of it – and for a while it seems one of those comi­cal “Computers Don’t Argue” variants, until it takes a neat and totally appropriate turn.

Lady Churchill’s Rosebud Wristlet for June features just three stories: a novella and two sub­stantial novelettes. All three writers were new to me – editors often say that discovering a new writer is one of the highlights of their job, and I believe them, because as a reviewer, coming to a story by a writer new to me and finding enchant­ment all unexpected is thoroughly delightful.

The novella is “Magicians and Grotesques” by Rachel Ayers. It’s about a travelling circus, and a series of murders. Jill is a magician’s as­sistant (and an accomplished stage magician herself) who is haunted by the ghosts of the murdered. When a new tiger trainer is hired, a mysterious Frenchwoman, things accelerate…. The resolution of the mystery is actually a mild disappointment – a bit too familiar – but the characters and the circus setting are very well done.

Better still is “Letterghost” by David Fawkes. This opens with two homeless men witnessing another man disappear, leaving behind some letters, one of them quite strange indeed. Their milieu comes off steampunkish in flavor, complete with zeppelins, not to mention evil sorcerers. The two men, Dag and Bogus, try to track down the sender of the curious letter. They are soon enmeshed in a sorcerous scheme, involv­ing not just the aforementioned evil sorcerers but a witch who burned for three decades, a walking and talking tiger, bad bankers and bad lawyers (natch!), and more strange letters. As the two seem to close in on what’s really happening, Bogus begins to remember a library, and the witch… and the world seems to diminish around him. The conclusion is unexpected – either heartbreaking or perhaps bit­tersweet. Perfect, really (though I wish the prose had supported the setting just a bit better). That said, it’s all told a lovely and moving story.

In the July Galaxy’s Edge I liked a story from Chris Barham, “Bad Moon Falling“. Nick is an astronomer, just dumped by his girlfriend, and he is one of the few people still trying to decode the Ross 128 radio signals. As a mission to Mars is launched, he starts to correlate the Ross signals with the Lunar Seismological Survey, and notices an anomaly – a seismological spike. Before long, it’s clear that something is happening to the Moon, and also that the signal from Ross has started that – and, worse, that the Moon’s orbit is decaying. Earth is doomed – then Nick decodes the Ross signal. All this is pretty cool – alas, the ending is a bit of a letdown. The issue also includes good work from a couple of Galaxy’s Edge regulars. Nick DiCh­ario‘s “Bear, Hunter, Preacher, Crow” is a fable about an intelligent bear confronted by a hunter while he’s trying to enjoy his coffee and muffins. This doesn’t end well for the hunter… and in the end we are confronted with humanity’s problems. Alex Shvartsman‘s “Choice of the Conquered” presents an Earth under the domination of aliens. Resisters are forced into a terrible game show, in which they must make terrible choices affecting the fate of people close to them. The question that is raised is who to blame? The aliens? Or the humans who cooperate? The story is making a moral point, in perhaps too pat a way, but it did engage my interest. 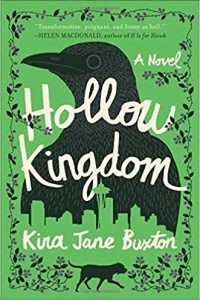