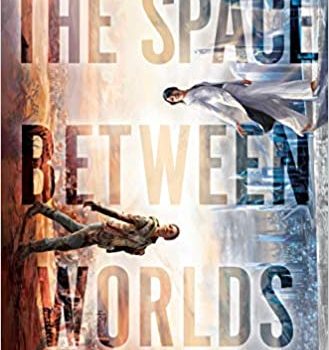 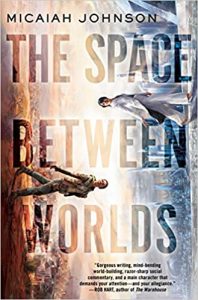 Micaiah Johnson’s The Space Between Worlds is another book I have mixed feelings about. Not about its success: The Space Between Worlds is ambitious and largely accomplishes what it sets out to do. My mixed feelings are entirely down to whether or not I like it, and how to analyse what it’s doing, regardless of my immediate emotional reaction. Because, in one sense, it’s a quiet, do­mestic novel about jobs and relationships, borders and class issues, and the problems of navigating structures of power as an outsider that those structures can crush with impunity… and then, from another angle, it’s a novel of action and in­trigue, revolution and consequences. Throughout, The Space Between Worlds is concerned with identity: who you are, where you come from, who you want to be; how others see you and whether you are a different person in different places, and how different you are – or can become – based on choice and circumstance.

In a setting that may or may not be a recovered post-apocalyptic version of our world, the Eldridge Institute and its CEO, Adam Bosch, have cracked the multiverse theory. People can see into worlds that took different paths – only similar worlds, but over 400 of them. Inanimate material can be transferred between worlds, but people can only survive the trip if they aren’t still alive in the world they’re travelling to.

That makes people like Cara, who is dead in 372 of the accessible worlds, valuable – at least temporarily. Cara is a traverser, employed by the Eldridge Institute to travel between worlds and bring back information. Cara comes from the settlement of Ashtown, where life is rather cheaper and generally more violent than in Wiley City: her residence in Wiley City, with its free healthcare, good food, clean public parks, and general high standard of living for its citizens, is contingent on her employment visa. She won’t qualify for citizenship for another four years, and the Eldridge Institute may find a way to automate her job before then.

Cara has a secret. She’s not this world’s Cara at all, with a stepbrother and a stepsister in Ashtown’s religious community: she’s another world’s Cara, escaping an abusive relationship with the ruler of Ashtown and the wasteland, determined to thrive – taking the place of a Cara who died traversing to her world. Cara’s existence, and her identity, is precarious in every sense of the word.

On one traversal, Cara almost dies. She stum­bles into a revolution against the emperor of the wasteland – a different emperor than the one in her world. This revolution causes her to realise certain things, not only about herself, but also about Adam Bosch and Eldridge Industries. There are lines, it seems, that Cara will not cross – and things she will sacrifice everything to prevent. Or to avenge.

The Space Between Worlds is a novel in­vested in interrogating borders, crossings, and interstices. The title stakes out Johnson’s thematic ground, and between worlds, here, is a polyvalent phrase. The borders here are between places and communities (Wiley City and Ashtown, the Ash­town Ruralites and the runners who work for the emperor), between possibilities (represented by other worlds where things turned out fractionally different), and between people. Their presence in the narrative is characterised as much by the relationships that cross them (that traverse them) as by the relationships they sever. We see this in Cara’s relationship with her stepsister Esther and in her relationship with her professional handler, Dell, which is marked by attraction, affection, and levels of mutual misunderstanding.

Cara’s relationship with Dell is a fascinating one. Cara is seriously attracted to Dell, and believes that no romantic or sexual relationship between them is possible due to the gulf of class and status between them. At the same time, Dell covers for Cara, shows up for her, and tries in her own way to support her – and the Dells of other worlds have gone to bed with Cara. What lies between them is complicated – even more complicated than Cara’s feelings about Nik-Nik, emperor of Ashtown, whom she remembers as a man who both cared for and hurt her.

The Space Between Worlds is fascinating, complicated, compelling, and far too aware of the costs of precarity to be able to end on a triumphant note. But its quiet, personal, hopeful conclusion is more satisfying, in a deep-rooted way, than any conclusion that turns on revolution. This is a jewel of a novel, all the more impressive for being Johnson’s debut.

I still don’t know whether I like it. I don’t have to. I admire the hell out of it, regardless. 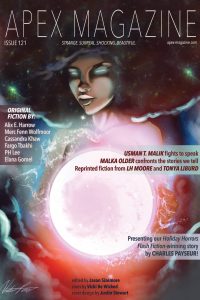